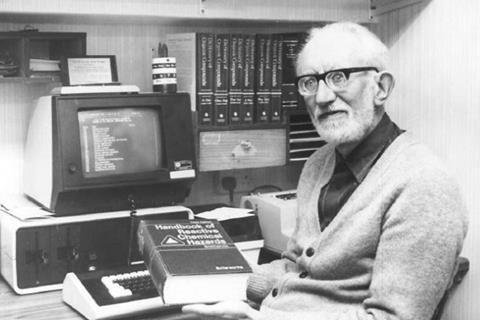 A chemist recently posted on Twitter that their flask had exploded. It was quite strange, they remarked, because the reaction was something they’d done before without incident. It was a reminder of how much of the chemistry we do is under kinetic control; we are often blissfully unaware of the yawning thermodynamic abyss that lies just a little beyond our standard reaction conditions. There monsters be.

Industrial chemist Leslie Bretherick spotted this in the early 1960s. After graduating from the University of Liverpool in 1946, he worked in the laboratories of May & Baker, then a leading British pharmaceuticals and agrochemicals firm. He seems to have suffered his first significant injury after spilling oleum on his leg, which left him with both a permanent scar and an enhanced respect for the materials with which he worked.

Two years later, while dissolving chromium trioxide in acetic anhydride, a procedure that he had conducted eleven times previously on increasing scales, the flask exploded, squirting flaming solvent across the lab some of which reignited after being put out with a CO2 extinguisher. Bretherick’s line manager sent a letter to Chemistry and Industry describing the incident. This prompted a reply describing a similar incident four years previously; one of four identical mixtures of CrO3 and acetic anhydride began to warm and fume. The mixture was ‘transferred to the yard and this was the last we saw of it’. A repeat reaction caught fire immediately. The writer expressed regret that he had not written sooner, suggesting that in future every unexpected event should be reported in a letter to avoid future accidents.

In 1964, another letter to the same journal reported a big explosion with the same components. Although the letter included several references, none were to the earlier reports. This prompted a reply from Bretherick reminding readers of the earlier incidents, one of which, he wrote, ‘almost involved my personal oxidation’. But he went further. ‘The fact that this, and other chemical hazards, are not well enough known in chemical laboratories points to the need for a classified compilation of chemical hazards readily available to laboratory workers’. It was the beginning of a life-long obsession.

Now working for BP in Sunbury, UK, Bretherick began compiling an index of chemical accidents in his spare time, making a note of the reagents involved and the nature of the incident. The task grew and grew, and from 1971 BP let him spend half of his time working on it. Some 2000 university departments and chemical companies were invited to contribute incidents.

The first edition of Reactive Chemical Hazards, published by Butterworths in 1975 (he cannily played three publishers off against each other to get the highest royalties), contained listings of individual chemicals but also general safety observations about classes of material. It is a fascinating read because so many of the accidents listed seem so… real. ‘When a Winchester [of carbon disulfide] fell off a high shelf and broke behind a rusted steel cupboard, ignition occurred’. If that seems a little obvious, who is aware that mixtures of carbon disulfide and alkali metals are in some cases ‘more shock sensitive than mercury fulminate’? It is precisely this matter-of-fact, anecdotal style that makes Bretherick such a page-turner. If one has a sense of rubber-necking at the misfortunes of others, there is an extraordinary education to be had simply by browsing the pages. And better still, there are touches of humour. Amid the warnings about aqua regia, nitration and picrates appears the entry:

Can of Beans
An unopened can of beans placed in a laboratory oven originally at 110 ˚C but later reset to 150 ˚C exploded causing extensive damage. Comments were judged to be superfluous.

At the back of the book, readers were invited to submit entries.

Edition followed edition, with Bretherick’s entire family co-opted to sort index entries by hand. He also edited a smaller volume published by the Royal Society of Chemistry, Hazards in the Chemical Laboratory, the title filling a stylised round bottom flask on the cover. In addition to a concise introduction to laboratory safety, it had a central section devoted to some 500 chemicals with quick guidance to their hazards, handling and disposal. It was this volume that I first encountered as a graduate student because it was once almost ubiquitous in UK chemistry labs.

As Reactive Chemical Hazards grew, Bretherick’s eyesight, which had never been good, worsened. Peter Urben and later Martin Pitt joined in to support the work, adding wry observations of their own (look up ‘supervisors’) and the book expanded to two volumes. Conversion to electronic format was another epic task that threw up cheminformatic and technical problems at every turn. But the text was now searchable.

Bretherick died in 2003 but the handbook lives on, with his own entries forming the core of the latest, eighth edition. The question is who will carry on the work? As William James wrote, ‘a large acquaintance with particulars often makes us wiser than the possession of abstract formulas’ and there is as great a need as ever for us to maintain a memory of past accidents. Perhaps the world’s chemical societies should take over the compilation and make it freely available for the safety of all.

I am very indebted to Peter Urben and Martin Pitt for their reminiscences and advice.