Years ago, a non-chemist friend of mine visiting my lab asked me what a rotavap was for

Years ago, a non-chemist friend of mine visiting my lab asked me what a rotavap was for. After my explanation, he asked, ’do you guys ever make hooch with that thing?’ I was reminded of this when I visited my cocktail mixologist friends Tony Conigliaro and Spike Marchant. Tucked under the eaves of the roof of their bar in north London, UK, is the cramped laboratory where they prepare the exotic concentrates, syrups, and decoctions that make their cocktails so special. In addition to a pair of glass-fronted refrigerators crammed with fruits and leaves, steel shelves groaned with equipment - blenders, mixers, filters, shakers, and much more. By the window stood their pride and joy: a gleaming rotary evaporator. At its lower end spun a large pear-shaped flask filled with green leaves and a clear liquid, with droplets of clear condensate dripping gently into the receiver. The sight made me grin. 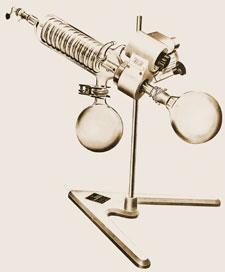 One of Walther B?chi’s first commercial rotary evaporators, dating from 1959

The rotary evaporator is one of the iconic devices of the modern chemistry laboratory and every student learns - often the hard way - how to use one (Chemistry World, December 2009, p78). Much as it is hard to conceive of a time when the mobile phone did not exist, many of us never stop to ask what chemists did before the arrival of this remarkable device.

At some point in most synthetic chemistry the solvent has to be removed from a mixture. For solids this might be done in open containers using very gentle heat. But otherwise one had to set up a distillation, methodically assembling glassware joined by means of carefully bored corks, applying a Bunsen flame ever so gently to the flask. To speed up the process, a vacuum could be applied to lower the boiling point. The problem, as every chemist knows, was the ever-present danger of bumping that arises from local superheating. Since boiling chips lose their usefulness under vacuum, a stream of bubbles introduced with a capillary (Chemistry World, October 2008, p79) can provide nucleation sites. But this raises the pressure and limits what can be distilled.

Some dogged chemists tried to find ways to induce nucleation by mechanical means, such as violently shaking the entire distillation apparatus to induce bubble formation - an operation not for the faint of heart. In his magisterial book on laboratory technique, Avery Morton rather incredulously reported that ’a way has even been found of rotating the flask during distillation’, as if the chemist in question had lost his mind.

Indeed, in 1924, the Irish chemist H G Becker had reported that by using a well-lubricated, extra long ground glass joint, it was possible to spin the flask using a loop of rope and a pulley driven by an electric motor. The rotation - not too fast, Becker said - mixed the solvent enough to prevent hotspots, but also provided a thin film of liquid that would favour evaporation. But although already used in industry, the principle was too radical for laboratory chemists. 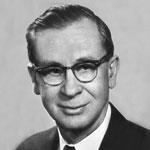 The 1940s saw the rise of a new idea in separation science - countercurrent extraction - where a chemical species is partitioned between portions of immiscible solvents moved step-wise, in opposite directions, through a series of flasks. It allowed substances with very similar partition coefficients - the lanthanides, for example - to be separated under very mild conditions. For amino acids and peptides, the technique was developed by the US chemist Lyman Craig, whose PhD involved studying alkaloids related to ergot. A splendid glassblower, Craig spent many hours devising and making his own glassware. By the 1940s he had begun to measure partition constants, a figure he believed as characteristic as the melting or boiling point. His experiments led to the extraction technique that would allow him to purify such molecules as gramicidin, the bile acids, insulin and other hormones, RNA and many more. He accompanied this with elegant and methodical studies of the polypeptides’ amino acid sequences.

But his extraction methods meant that removing solvent was always an issue. In 1950, in a paper amounting to less than a page, he described his invention - a flask, spun by Becker’s pulley, from which solvent could be distilled under reduced pressure into a second flask. It sparked a host of imitators and developments. In 1957, an ambitious Swiss glassblower, Walther B?chi, began selling the first commercial rotavap. They went like hot cakes, becoming known simply as ’B?chis’ - leaving Craig almost forgotten - and the pace of synthetic chemistry accelerated by an order of magnitude. 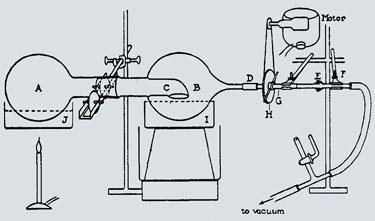 50 years later, the device began to invade kitchens led by pioneers like Ferran Adria and Heston Blumenthal, and now the laboratories of mixologists. So next time you drink a mint julep or a horseradish Bloody Mary, just think: those flavours may have come through, of all things, a rotavap.