If there is any single substance that unites pretty much all chemists, it has to be water

If there is any single substance that unites pretty much all chemists, it has to be water. It is ubiquitous and inescapable, from the heat sinks of our condensers, and the innermost recesses of our vacuum systems, to the furthest galaxy. One might think, then, that being the most familiar, it would also be the best understood molecule in our textbooks. Far from it, water is the most paradoxical molecule we know, every property concealing surprises to test our every 'rule’. 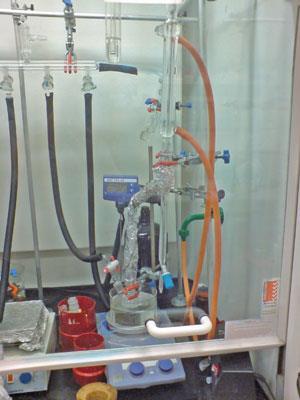 Its phase diagram is notorious with over 15 solid forms, and debate raging over the existence of yet more in the liquid. It is spectacularly stable with respect to its elements, yet displays an intolerable kinetic promiscuity. And its exceptional stickiness leads it to tangle with just about anything it meets. Given a smidgeon of an amphiphile, water will embrace oils and waxes, to the delight of gastronomes and gourmets. But not chemists. For an emulsion at the end of a reaction work-up means the start of a tedious battle to release one’s product from water’s clammy grip. Should we be surprised that a famous piece of glassware emerged from such a fight?

Ernest Woodward Dean was born on 28 September 1888 in Taunton, Massachussetts, US, and studied chemistry at the nearby Clark University in Worcester. Graduating with top honours in 1910, he secured a place at Yale University to study the kinetics of ester hydrolysis with W A Druschel. Having obtained his PhD in 1912, he secured an academic position at the newly founded Hobart and William Smith Colleges in Geneva, upstate New York. 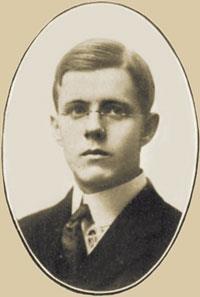 Source: © COURTESY OF THE HOBART AND WILLIAM SMITH COLLEGE ARCHIVES, GENEVA, NY, US

There he not only taught chemistry as part of the liberal arts programme but also met an undergraduate, Gladys Moyer, whom he married in 1915. Was there a scandal? Did that force him to move on? Or was it simply the realisation that on a small town academic’s salary he might never afford to keep his wife and family in the style he wanted? Whatever the reason, after 3 years Dean joined the Bureau of Mines Experimental Research Station in Pittsburgh, working on petroleum distillation and characterisation. And it was here that he met emulsions, a major headache for the oil industry.

Wanting to quantify the water in crude oil, Dean began working with fellow chemist David Dewey Stark. After trying several methods for 'breaking’ the emulsion, as well as attempting to separate the phases using solvents, they settled on distillation. Others had quantified water in spices, wood and butter by distillation, but Dean and Stark hit on the idea of recycling an organic solvent with a boiling range straddling 100°C - water-saturated benzene and xylene. With the station’s glassblower, F E Donath, they designed and constructed a device consisting essentially of an inverted Claisen adapter (see Chemistry World,  October 2008, p79), with a condenser at the top and a small graduated test-tube acting as a receiver directly below it. The assembly ensured that as the mixture boiled, the denser water would be captured in the test tube, while the lighter solvent would overflow and be returned to the still pot. Larger volumes could be handled by modifying the receiver to include a tap at the bottom to periodically draw off the water.

In 1922, Dean moved to Standard Oil’s labs in New Jersey. With G H B Davis he developed a viscosity index that, in spite of having no theoretical basis, is still widely used in the petroleum industry today. He was eventually promoted away from the bench, but continued to do influential work on standards. He seems to have lived a quiet and respectable suburban life in Westfield, New Jersey, raising two sons and two daughters. He retired in 1953 and died 6 years later.

Stark too moved into industry, and was still at the bench in 1939 working on the processing of crude oil. He died in Los Angeles in 1979.

The Dean-Stark trap is still a standard piece of glassware in chemical catalogues. For condensation reactions - those that generate water as a product - it provides a powerful method to follow the progress of a reaction. By removing one of the products, it effortlessly drives such reactions to completion. It is a reminder to chemists of the Ancient Mariner’s prophecy: ’Water, water, everywhere. Nor any drop to drink.’