Dylan Stiles can light your fire (and put it out again)

Dylan Stiles can light your fire (and put it out again)

Work in a chemistry lab long enough, and I can just about guarantee sooner or later you’ll battle an accidental fire. There are a few exceptions: biochemists deal mostly with fireproof aqueous solutions, and it seems unlikely a computational chemist’s computer would spontaneously ignite. But for thoroughbred organic and inorganic chemists, fire is a very real threat.

Part of the safety training in most labs is how to manage a fire. Years ago, I was driven out into a field by a safety officer, who then set a puddle of gasoline on fire. We took turns putting it out with an extinguisher. It was useful, but hardly realistic.

Since then I’ve witnessed more than a few actual lab fires, and I admit that I’ve started a couple of my own (nothing major). My perception of fire changed from innocent childhood curiosity (pondering what a flame looks like in zero-gravity, see below) to a guarded respect. I can describe the panic and adrenaline spike of a real-world fire in two simple parts: how to accidentally start a fire; and how to put it out.

Researching this topic, I holed myself up in the far corner of the chemistry library, surrounded by a dozen books on explosion hazards, industrial accidents, and guides to pyrophoric materials. Paranoid and not wanting people to think that I was up to something, the titles faced the wall.

I learned very quickly that I don’t know nearly as much about fire as I thought. Guidelines for safe practices in industrial plants use phrases like the oxygen balance of a reaction, and lower explosive limits (LEL). Industrial-scale fires aren’t the kind you can stomp out with your foot and then laugh about over drinks later. So I’ll confine this to academic labs. 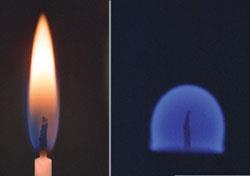 The easiest way to start a fire accidentally is to point a Bunsen burner in the wrong direction. Trickier to predict are certain scenarios that can go pear-shaped unless you know precisely what you’re doing. For example, when you’re using palladium on carbon for catalytic hydrogenation, there is only one correct way to set up the reaction. Put the palladium in the flask first, then add solvent. Get it backwards and you have a fire. I learned this the hard way on one occasion when I added a bit more catalyst to a reaction that had stopped, sparking a baby-sized fireball that neatly singed my eyebrows and gave me raccoon eyes of charcoal around my goggles.

Worse are pyrophoric reagents, which ignite in air. Take diethylzinc, first prepared 150 years ago. The original publication is a good read, replete with misguided theories about molecules, diagrams of complex and hazardous glassware arrangements, and a piece of advice that still rings true: ’It is necessary that the operator should take precautions to preserve himself from the danger.’

Dispensing a solution of organozinc produces a match-sized flame on the needle tip when removed from the bottle. There are tricks to prevent it, but the only real fix is to work in a glove box. Using organometallics on the benchtop is risky, so move other flammables out of harm’s way and have firefighting countermeasures at the ready.

The list goes on. Reactive metals yearn for the opportunity to go up in flames, and potassium hydride is a particularly nasty one. But enough about ways to start fires; how about putting them out?

Don’t take this as a guide. Lab staff should go through the proper channels of safety training. That said, in the event of a fire, a properly rated extinguisher is your best ally. But if it’s only a match-sized flame it can easily be quenched by dunking it in a beaker of dichloromethane (non-flammable solvents are nice sometimes). And if you have no other options, grab the closest bucket of dry ice.

The best bet is to avoid fires in the first place. Treat your reagents with the love and care they deserve and you’ll get along just fine, no conflagrations necessary.

Dylan Styles is a PhD student based in California, US