Dylan Stiles is writing up

Dylan Stiles is writing up

In theory, I’m supposed to be writing a thesis right now. So they tell me. Don’t get me wrong, I really want to. I envisage a magnum opus that puts years of labour and ideas in perspective. But the practical aspects of sitting down in front of a computer to assimilate that into a 300 page document are just a tad intimidating. Having never written anything a tenth as large, I fear it will come out a tangled mess.

Of course, trepidation and anxiety are common reactions for anyone who has ever attempted to jump over this final, highest hurdle before getting a PhD. So I’m not too concerned. And although I haven’t actually written one page of the document, my procrastination has taken on a technological twist. I convinced myself that my Powerbook, a friend and ally through all these years, is too dinky for the task of writing a thesis. I decided to construct a work space fit for a king. After trips to the Apple store and Ikea, I’m now at the helm of a giant new iMac. Expensive, severely overkill, and nothing short of heaven. 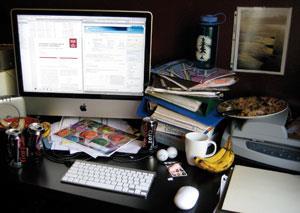 Mac amongst the chaos: a work space "fit for a king"

It turns out that merely purchasing a large computer does not help writer’s block. This realisation occurred when my gaze turned from the screen to one of several large stacks of references and notebooks full of scribbles and coffee-stained NMRs. Why did I feel this 1977 article from The Worm Breeder’s Gazette  was important enough to copy, three-hole punch, and file away? What was I thinking?

The tower of literature was listing dangerously and threatening to topple onto my wireless keyboard. Worse, the scattered mess of paper was digitally augmented by a few hundred more articles, stored as PDFs in cryptically-named folders on my hard drive. I don’t claim to have an elegant way of organising the articles I save - in fact, no particular system at all. What began as a physical collection of papers stuffed into a filing cabinet made a digital transition some years ago. But with each article I added to the haphazard archive, a growing sense of doom told me it was only a matter of time before everything imploded. Now it’s time to face the music.

I’ve taken EndNote for a few test drives and I remain unimpressed by its clunky interface and overall brutish appearance. Enlisting a program to be my electronic brain trust is a serious commitment, and I want something that will love me back. EndNote is an awkward dinosaur that feels more like an appliance than an assistant.

Several conversations with like-minded peers turned my attention to a relatively new program, Papers for Mac OS X. I tried it and fell in love. While I assure you that I’m not a paid spokesperson for either Apple or Papers, I’m not kidding when I say this just may be the last word in organising your references. The centre-piece of the program is a window that displays the PDF of the reference you selected. You can flip through them just as easily as you would chapters in a book. It’s aesthetically pleasing and you really want to use it. No surprise that Papers has won accolades for its design.

It’s easy to import new citations, either from references you already have saved on your computer, or fresh off the web. Reconciling documents from both the past and future is relatively painless. Without spiraling into a rant about information architecture and the future of science, I think that programs like Papers will change the way a lot of scientists organise their thoughts. For the first time, anyone can have their entire library saved, cross-referenced, annotated, and searchable.

Some might say my new toy is a little self-indulgent. Who knows, maybe I could have hammered out a chapter in the time it took to go to Ikea. But at least I’m now looking forward to cuddling up with that wireless keyboard and getting down to work.