What could possibly contain the strongest acid in the world, asks Dylan Stiles

What could possibly contain the strongest acid in the world, asks Dylan Stiles

In everyday life, there are few opportunities to throw around superlatives without resorting to hyperbole. But one branch of chemistry relishes such descriptors more than any other, and has the hard data to back it up: the chemistry of superacids.

Defined as acids stronger than 100 per cent sulfuric acid, superacids have a long and Nobel Prize-winning story. George Olah can be considered their godfather. Olah was interested in studying carbocations: ions where carbon bears a positive charge. These species were speculated to be intermediates in chemical reactions, but many doubted their actual existence. They only way to settle the debate would be to isolate and study them, which is difficult because carbocations rapidly decompose and rearrange. 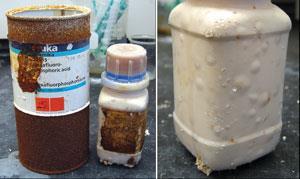 Olah realised that the best approach would be to generate stabilised carbocations with totally unreactive counterions. Fluorosulfonates fit the bill in this regard. Alas, unable to get requisite chemical reagents in post-war Hungary, Olah prepared his own hydrofluoric acid gas for the purpose. Such dedication is rare, to say the least.

Fluorosulfonic acid complexed with antimony pentafluoride launches its acidity into the stratosphere and enabled the isolation of the long sought tert-butyl cation. This combination was dubbed Magic Acid? (yes, that’s a registered trademark not to be confused with the lysergic variety) when a post doc, in the wake of Christmas festivities, decided to dissolve a candle in the liquid. When he took an NMR of the resulting solution and found it gave a strong signal for the tert-butyl cation, it was nothing less than magical.

What makes these acids so magic is that they really, really want to give up a proton. Replacing the proton with an alkyl group produces voraciously active alkylating agents, and methyl fluorosulfonate (Magic Methyl) is strong enough to methylate ethers, nitriles, and just about anything else. The problem is that Magic Methyl will also methylate human DNA, and it’s a volatile liquid. That’s a deadly combination, and in the 1970s there was a reported fatality from a chemist who spilled a few drops on his lab coat.1 For that reason, Derek Lowe (our ’In the Pipeline’ columnist) puts Magic Methyl in the category of ’things I won’t work with’, and I have to agree.

Nonetheless, the quest to develop acids that are bigger, better, faster and stronger marches on, using totally non-coordinating counterions like hexafluorophosphonate, tetrafluoroborate, and my personal favorite, a fluorinated tetraarylborate known as [BArF4], or simply BARF. That one always elicits giggles from the back of the room during seminars.

The current gold medal winner in the arena of ultra-strong acids comes from the work of Christopher Reed at the University of California, Riverside. His acids feature carborane anions, which are caged boron complexes speckled with halogens. Carboranes can delocalise a negative charge much like a three-dimensional benzene molecule, and they are non-volatile solids.

Carborane acids pull off feats that even Magic Acid cannot. Protonating things like benzene and C60 is akin to a person lifting a city bus over his head, and worthy of a superlative beyond ’super’ (Reed has suggested ’mighty’). And the fact that they can do so at room temperature without decomposing has earned them the status of strongest-yet-gentlest. The prospect of achieving the holy grail of superacid chemistry, protonating xenon, is not out of the question.

There’s a somewhat philosophical paradox to be addressed. If you made the strongest acid possible, what would you store it in? So far, Teflon containers have proven the most resilient. At least, compared to a plastic bottle of hexafluorophosphoric acid I found (see below): blistered, label disintegrated, and its secondary metal canister well on the way to retirement, only the universal symbol for ’hand-melting’ remains visible.