Feel free to make photovoltaics better, says Philip Ball. But don't forget they have to be cheaper, too

Feel free to make photovoltaics better, says Philip Ball. But don’t forget they have to be cheaper, too

While discussing plans for the UK’s Energy Technologies Institute, scheduled to be running by 2008, I was handed a map of North Africa. Marked on the Sahara desert was a red rectangle, covering a modest 254 by 254 kilometres (see below). This is the area that, if covered entirely with concentrating solar power plants, would satisfy the total global demand for electricity.

Sure, it’s not quite as simple as that, but the image underlines the awesome quantities of energy streaming onto the planet every day: each square kilometre of hot desert receives an annual solar energy equivalent to 1.5 million barrels of oil.

So why aren’t we using it more? Making electricity directly from sunlight simply remains too costly. The scientific literature can give the impression that we need more efficient photovoltaic (PV) materials - silicon flat panels, which make up more than 90 per cent of today’s PV market, squander around four-fifths of the light energy they receive. But it’s not obvious that ’better’ materials will make PV technology more pervasive. Other semiconductors, particularly when used in sandwich structures that soak up light across the solar spectrum, can double the efficiency - but at far more than twice the price. Breaking efficiency records may bring academic accolades, but that alone won’t transform the industry. Indeed, if you can find a way to make solar cells cheaply enough, you could corner the market even with a rather modest efficiency. This, after all, is in effect what nature does with photosynthesis.

One way to achieve that is by improving the performance of silicon itself. Typically, silicon solar cells use slabs of crystalline silicon made by the same method used to manufacture wafers for microelectronics. In fact, the silicon PV industry often uses cast-off wafers from the electronics industry that have too many defects.

Yet even this stuff is not cheap, particularly because silicon’s low light absorption means the slices have to be thick. A cheaper method involves simply pouring molten silicon into moulds to generate a mosaic of microcrystals. That’s already used in photovoltaics, although the efficiency is lower still.

Silicon is a poor light absorber because a photon cannot excite an electron from the valence to the conduction band, where it can contribute to a photocurrent, unless the electron’s momentum is also altered by interaction with vibrations of the crystal lattice. This makes silicon an indirect-band-gap material. The troublesome need for a momentum change does not apply to amorphous (non-crystalline) silicon, which can be used for PV cells with film thicknesses of less than a micrometre rather than several hundreds.

But evidently no trick has yet brought silicon solar cells within the price range needed to coat every new house with PV panels. This is where nanocrystals come in. 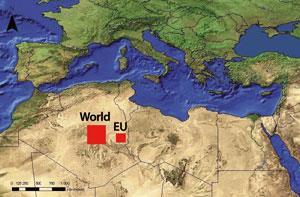 Light-absorbing and light-emitting semiconductors change their active wavelengths at the nanoscale, with absorption and emission peaks being blueshifted the smaller the particles get. In addition, nanocrystalline silicon can become a direct-band-gap material when the crystals are small enough - something that has already been exploited for making efficient silicon-based electroluminescent devices for displays.

A team in Colorado, led by Arthur Nozik of the National Renewable Energy Laboratory, recently found another potential benefit of nanocrystalline silicon solar cells. They report that these crystals can allow each photon absorbed to excite not just one but two or three electrons,1 which could more than double silicon PV efficiency at no extra cost. Basic physics limits the maximum possible efficiency from ordinary crystalline silicon to around 33 per cent - but with multiple electron generation, that rises to 44 per cent in normal sunlight and as much as 68 per cent using lenses or mirrors to concentrate it.

But they’re not there yet. For one thing, the extra electrons made this way aren’t mobile and ready to roll in an electrical circuit, but remain bound to the hole left in the valence band. And these excited pairs are short-lived, so the electrons will have to be grabbed quickly.

Philip Ball is a science writer based in London