I'm no fan of reality TV. But watching people just going about their business can be fascinating, says Philip Ball

I’m no fan of reality TV. But watching people just going about their business can be fascinating, says Philip Ball

When I say that I’m no fan of reality TV, I don’t mean that I view it with a disdainful ’tsk tsk’ issuing from pursed lips, but simply that I’ve never even given myself that opportunity. It’s a land I’ve not visited. But I do appreciate that watching people just going about their business, rather than pretending to be engaged in exotic dramas, can be fascinating.

Of course, these programme makers lack the courage to make that business truly ordinary, relying instead on absurdly contrived situations. But perhaps we might hope that a faith in ordinariness will ultimately emerge (that is, after all, where the genre has its roots) to counter the current fashion in documentary-making for funny camera angles, far-flung locations, portentous music and actors in period wigs. This, all too often, is how science is presented on the small screen: an exhausting whirl of spectacular graphics, pounding music, genesis and apocalypse. 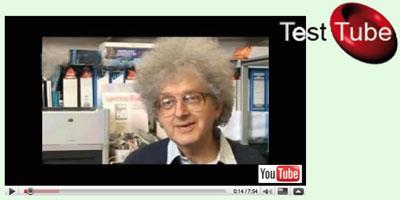 What a joy it is, then, to visit Test Tube, a website stemming from a project at the University of Nottingham, UK, after the city was designated in 2005 one of six British ’science cities’. The site offers a clutch of short videos that claim to take you ’behind the scenes in the world of science’. And they really do.

Here are messy offices - not ostentatiously messy, but properly so, with rows of anonymous ring binders - and anodyne lab benches. Here are scientists looking and talking like everyone else, describing their work not in carefully edited sound bites or with faux enthusiasm but in a relaxed and non-patronising way. There are no breathless presenters, no ’locations’: the camera rarely ventures beyond the red-brick confines of the university.

The stars of the show

Although he would surely wish to deny it, a star of the clips is chemist Martyn Poliakoff, a specialist on ’green’ solvents. With his unruly shock of white hair and donnish cadences in which a ghost of his Russian ancestry survives, Poliakoff could seem like the eccentric scientist from central casting. But this notion is gently sent up even as it is indulged. In one of the most popular clips he talks about how people (especially after closing time in the city centre) constantly call out ’Hello Einstein’. ’Part of my mission is to show that all scientists don’t look like me,’ he says.

The videos are made by Australian-born Brady Haran, a former BBC reporter and video journalist who became ’filmmaker-in-residence’ at Nottingham in 2007 and began working on the Test Tube series. His short films are all the more striking for their simplicity, sometimes verging on banality. It takes confidence and skill to strip things down so much and not to appear merely amateurish: to capture people in a way that is so unforced, letting them genuinely speak for themselves. ’I didn’t just want pretty pictures or a constant stream of "breakthroughs",’ says Haran. ’I wanted to show what real scientists are like and how they work. I want the viewer to feel like they are in my position, seeing what I see, and I ask what I think they would ask.’

But this isn’t all. Haran has also produced two other video-short series called The periodic table of videos  and Sixty symbols  . The first provides a clip for every element in the periodic table, explaining something of its nature, history and roles. The second takes 60 of the symbols used by physicists and astronomers (and chemists) - the wavefunction

, magnetic moment  m , and so on - and allows scientists to talk about what they mean. And Poliakoff, Haran and colleagues have just received funding approval for a new series on molecules.

The scientists involved in these projects think they can fulfil several functions. Since they are informative not only about science but about what it is like to do science (including the routine drudgery of grant proposals), they help to make that a believable career choice, rather than one that looks impossibly cerebral or falsely glamorous. They are full of useful material for teachers. Even specialists are likely to be intrigued - how would you explain a wavefunction? And the clips are so quick to make - the light editing often takes no more than a day - that they can be responsive to new developments or to viewer feedback.

Signs are that the videos have captured attention far and wide. They have drawn web traffic from over 160 countries (some of the videos are available in foreign-language translations), and while relying on little more than word of mouth, the number of hits for all the sites compares impressively with big commercial science communication channels. Within weeks of being released, the periodic videos had around 500 000 hits, and they are now an ongoing enterprise.

Although Haran makes canny use of forums such as MySpace and Twitter, he feels that ’at the end of the day, if you make something good and then keep making it, people eventually notice’. They have.

Philip Ball is a science writer based in
London, UK