Were you aware of Salt Awareness week? Me neither, admits Philip Ball

Were you aware of Salt Awareness week? Me neither, admits Philip Ball

But perhaps we should have been (it was in March), as it was endorsed by the British Heart Foundation, Cancer Research UK, Kidney Research UK and the National Osteoporosis Society, among others. It sought to highlight the health hazards of salt overconsumption, of which the mere names of the charities involved illustrate some.

The fabric of life

The Romans would have been mystified by this wariness of salt. They put ’sal’ on their greens, giving us the word ’salad’, they salted their meat, they served it in ornate silver salt-cellars, they even added it to wine. Their soldiers were sometimes paid in salt: a salary that made the good soldier ’worth his salt’. The monetary value of salt survives also in our sell, sold and sale. And yet their health didn’t suffer, for the average Roman citizen probably still had less than a fifth the salt consumption of contemporary Americans.

Salt was elevated to a fundamental substance of nature in the chemical pantheon of Paracelsus in the 16th century. His three ’principles’ (tria prima) of sulfur, mercury and salt were the formative components of all things. By adding salt to the duo of sulfur and mercury that Arabic alchemists considered to be the constituents of all metals, Paracelsus broadened alchemical theory to embrace living organisms. Salt was the ’coagulative’ principle which gave matter body, while sulfur was the principle of flammability and mercury that of fluidity. Thus salt was the very fabric of life.

But this Paracelsian ’principle’ took many concrete forms, within which we can discern the chemist’s modern concept of salts: ’There are many kinds of salt. salts of lead are of many kinds and of different natures: also salts of lime and salts which can be separated from other bodies.’

All this shows that salt is, like water and gold, one of those substances with deep cultural associations and values - a mythic substance. That’s what gives such resonance to an exhibition that opens in October at the GV Art Gallery1 in London, UK, fast becoming a central venue for the meeting of art and science. EntitledSense of Taste  , it features objects cast in rock salt by Australian-based artists Ken and Julia Yonetani. These include the elements of traditional 18th century still lifes, as well as an immense chandelier.

This is not the first time that salts have featured as artistic media. One of the most striking examples was Seizure  , a 2008 installation by artist Roger Hiorns in which a derelict flat in south London was filled with copper sulfate solution that was allowed to crystallise on the walls, turning a drab urban space into a magical cave of blue crystals.2 The impact of the work here again stemmed not just from the sheer visual spectacle but from its mythic familiarity. The mineral-encrusted mines and caverns of the deep earth were a common locus of Germanic Romanticism, where industry met with desire and beauty.3 Miners believed these places were populated by gnomes and goblins whose malevolence caused cave-ins. E T A Hoffmann wrote a story about the famous copper mines of Falun in Sweden, while the 18th century German poet Novalis (Georg von Hardenberg) knew his material when the eponymous hero of his novel Heinrich von Ofterdingen explores a deep mine: his father managed a salt mine, and Novalis trained for that profession too. 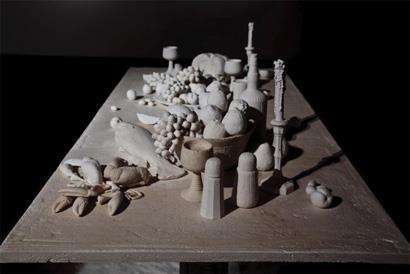 Source: © All Images the Artists, Courtesy of GV Art, London

Sense of Taste  is concerned with the dangers of salt, but not the physiological problems of overconsumption. The artists have used salt from highly saline groundwater in the Murray Darling basin, an agricultural region often regarded as Australia’s ’food bowl’. The area has recently been badly affected by salinisation, whereby natural salts are concentrated in soils by overirrigation. These salts are normally carried away by run-off, but if normal drainage is hindered the water evaporates and leaves the salt behind, rendering the soil alkaline, caustic and infertile. It’s not a new problem - ancient civilisations in Mesopotamia and South America turned fertile land into salty desert - but intensive farming and poor irrigation techniques are now making salinisation a global problem. Yonetani was struck by the contrast between the aesthetic appeal and cultural significance of his medium and its ruinous effects. ’I wanted to use the beauty of the salt and also its spirituality to depict the death of the landscape,’ he says. Too much salt leaves us without even any salad to put it on.