A road less trodden in science 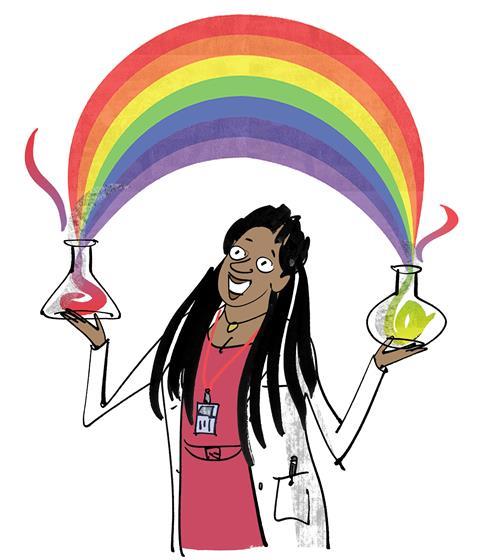 ‘What is your origin story?’ This is a question that I so often find myself being asked, and that leaves an air of discomfort in its wake: a lingering silence as I try to work out what I am actually being asked.

Are they asking me where I am from? If so, the answer is simple enough: I grew up in London in the 1990s. Sandwiched between two very different generations and two very different cultures, I am both Grenadian and Nigerian, or AfroCaribbean as I would like to identify. And yet the only option available for me to tick on forms is Black British (Other). The word ‘other’ resonates deeply with me. Once a word I resisted, I came to realise that there was beauty in being an ‘other’, one who proudly sits at the intersection of three interlinking marginalised identities: a black activist, artist and chemist. I am reminded of the words of Audre Lorde: ‘It is not our differences that divide us. It is our inability to recognize, accept, and celebrate those differences’.

Now, at the age of 25, I have found my community. A space that is comfortable, nurturing and allows me to flourish. But if you had told me 10 years ago that I was good enough to do a PhD, or that I would be the CEO of my own organisation, I would have done a Viola Davis shake of my head in pure disbelief and walked away.

Back then my inferiority complex ran rampant, despite having a large, loving and proud AfroCaribbean family. I rarely felt like I belonged in any of the four schools I attended, or even in this country. I saw very few people of colour who were teachers, educators or mentors, besides the tutors I was afforded by my mother’s tireless work ethic. Nevertheless, I didn’t recognise the negative impact that such a lack of diversity was having on my ideas of self and my worth until years later. Through the wonders of therapy and family support, I would come to realise the extent of the damage, while simultaneously learning how to be a proud black queer woman in the freedom of my university years.

Growing up as black British, one’s blackness is consistently called into question. My blackness cannot be hidden, unlike my queerness. I must wear it with pride, despite being told it makes me look angry or makes my brother look like a criminal. The feeling of being too black for my white peers but not black enough for my peers of colour led to persistent feelings of isolation and confusion about my place in society. Not to mention the frustration of conversations about race, where my lamentations were met with responses like ‘racism doesn’t exist in the UK anymore’. If 2020 has taught us anything it’s that the black struggle certainly hasn’t ended.

I never wanted to be a scientist growing up; I wanted to become a doctor. I had abundant medical role models: my mother was a sonographer, my father a carer and my brother a doctor. But the world of science remained alien to me – hardly surprising when one considers that only 25 out of 19,000 professors in the UK are black women. Only three black professors teach chemistry in the UK.

Then there was the lack of representation in school curriculums. The scientists presented to me looked like Charles Darwin and Albert Einstein, not Lewis Latimer and Alice Ball. We are not taught that the first medical physician was a black Egyptian man called Imhotep, or that the richest man to have ever lived was black. We continually deprive our growing multicultural society of the world’s expansive scientific history and the diversity within it.

The scientific world must become more inclusive, and create communities and networks of support and mentorship that benefit everyone. In the UK, receiving a holistic and balanced education remains a privileged opportunity. Nonetheless, it is possible to recognise one’s own privilege and use it to help others. I was lucky to study biology and chemistry under tutors who were both strong women of colour. They inspired me to believe I could study chemistry at university; they inspired me to create Creative Tuition, a free tuition service for young people from underprivileged backgrounds.

It only took one person in academia, my personal tutor, to inspire me to dream beyond what I believed I was capable of. So much so I started my school’s first chemistry society, began a PhD, and set up my first organisation, Creative Tuition. Though it has been hard, I have grown into myself and realised the change I can make to my corner of the universe. To increase inclusivity, decolonisation work must be done in a top down and bottom up approach. Now more than ever, young people need role models, mentors, allies and decision makers to inspire and support them into science research.

To find out more, visit creativetuitioncollective.com