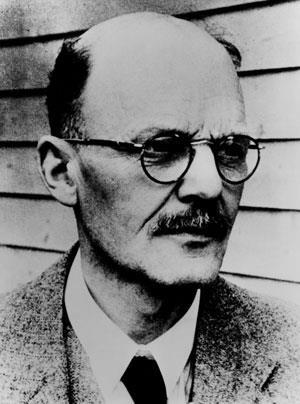 Counting is one of the first ideas we encounter as children. For English speakers, the language makes a beautiful distinction between what is countable and what is not. There is too much salt, but the people in a crowd are too many. When stuff is scarce, there will be less, or fewer, depending on what is being quantified. Yet in the world of atoms and molecules, the numbers are so huge as to blur the distinction. Occasionally, though, counting atomic events, one at a time, has led to great insights. And probably none greater than the countings of Hans Geiger.

He was born in the small German town of Neustadt an der Haardt, in the wine district of the Rhineland Palatinate. His father was an authority on south Asian languages at the University of Erlangen. Hans did his first degree in Munich and then worked with Arthur Wehnelt in Erlangen. Wehnelt was a leading authority on thermionic emission and had invented a cylindrical electrode used to create thin focused beams of electrons for microscopes. Geiger worked on low pressure discharges and was awarded his doctorate in 1906.

Geiger moved to England to work with Ernest Rutherford. At the time, Rutherford was preoccupied by the alpha-particle. Its origin was still unclear and the charge it carried was still uncertain. There was a pressing need to put the phenomenon on a quantitative footing. Geiger took on the task of measuring the scattering of alpha-particles by thin films of metal. He worked with a 2m long evacuated tube with a fluorescent screen at one end, a sample of radium chloride at the other and a small slit between the two. Geiger set to work counting the flashes he saw on a fluorescent screen.

He sat, hour after hour, in total darkness, peering through a small microscope focused onto a 1mm2 section of the screen, counting. When Rutherford had a go himself he lasted only a few minutes, later marvelling at his colleague’s extraordinary persistence. Geiger produced beautiful curves showing how the distribution of flashes widened as the number of interposed sheets of gold leaf increased.

But counting by eye was too inefficient to be practical and Geiger and his boss worried about whether every event registered on their phosphor screens; if they didn’t then the measurements would be consistently low. Casting about for an alternative, Geiger pinned his hopes on the trail of ions left in the wake of each particle. But the charge produced was too small to measure reliably. Could it be amplified? In 1899, John Townsend had shown how the ionisation of a gas was increased through collisions with neutral gas molecules. Under low pressures and with a sufficient electric field, the formation of negative ions led to a cascade of ionisation that amplified the initial event by at least two orders of magnitude.

Geiger’s detector exploited this idea. It consisted of a brass cylinder with an insulated wire running axially down its centre. At one end was a short length of glass tubing, closed at one end with a thin sheet of mica. With the brass chamber partially evacuated and the tube at high voltage, the central wire charged up even in the absence of any radioactivity. So Geiger connected it to a capacitor loaded on one side with a small quantity of radioactive material to allow this charge to continually leak away. When a radioactive source was placed on the other side of the mica window, each alpha-particle entering the detection chamber was signalled by a sharp kick in the needle of the electrometer, followed by the charge leaking away to zero.

But the best was yet to come. Since beta-particles were known to be scattered through wide angles, postgraduate cannon fodder in the form of Ernest Marsden was given the impossible task of seeing whether alpha-particles might not do the same. With source and foil set at angles to the screen, large angle scattering was observed. In their own laconic words, ‘If the high velocity and mass of the a-particle are taken into account, it seems surprising that some of the alpha-particles can be turned through 90°, and even more.’ The atom, it seemed, had a structure.

In 1912, Geiger returned to Germany to a professorship in Berlin where he worked with Walther Bothe on the Compton effect. Bothe would develop the coincidence principle, crucial to positron emission tomography (PET) scanners and particle physics, that would earn him the Nobel prize in 1954. Geiger, meanwhile, refined his tube with the help of graduate student Walther Müller. The new versions were more portable and sensitive to more types of ionising radiation, and became widely used for myriad applications.

But the Geiger–Müller tube escaped the lab. Following Hiroshima, Nagasaki and then a spate of nuclear accidents, its random clicking would become a metaphor for fear of the unknown and the public fear of technology. Counting can have its downsides.

Thanks to Paddy Regan for helpful comments