A heated spat about cooling air 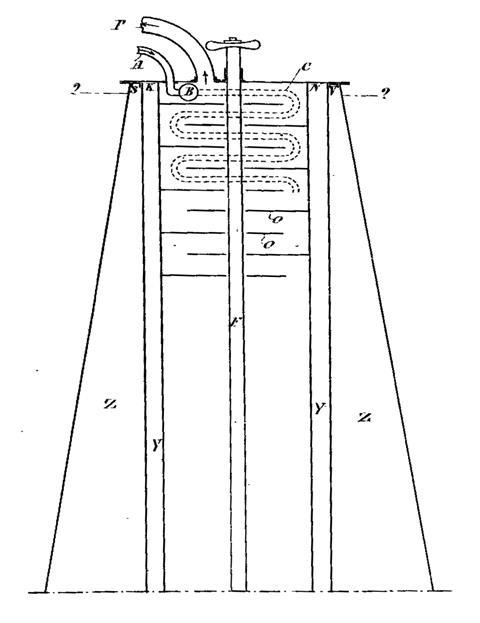 The other day I wandered down to our department’s stores to be met by the deafening roar of a liquid nitrogen tanker filling a queue of patient steel Dewars on wheels. This weekly ritual is an echo of events that helped cement the department’s fame, and of a series of ding-dongs regarding priority for the invention of the commercial air liquefier.

Although philosophers like Giambattista Della Porta introduced freezing mixtures in the late Renaissance, chemistry remained a subject dominated by flames and furnaces until the start of the 19th century. The only way to reach low temperatures was to start from ice either harvested in winter and stored in ice houses, or imported by ship from Canada or Norway. Then in the late 1840s an American doctor, John Gorrie, developed the first ice maker based on the rapid expansion of compressed air. In a patent filing of 1857, the engineer Charles Siemens suggested an improvement. What if the cold air issuing from the device was used to pre-cool the incoming air? Although he did not complete his patent, the idea of ‘regenerative’ cooling would spread across the burgeoning refrigerator industry.

In 1894 a young inventor, William Hampson, who listed himself as having ‘no occupation’, walked into the Royal Institution in London with an introduction to James Dewar’s assistant, R N Lennox. Hampson remains an elusive figure. Born in Cheshire he had studied classics at Oxford, graduating in 1881. He then started a career in law, joining the Inner Temple, but his energy was clearly elsewhere. He and Lennox had a chat during which Hampson described his idea for a device to liquefy air. Nothing came of the meeting. In 1895 Hampson filed a patent and presented a very compact prototype. Air, dried and freed from carbon dioxide, was compressed to 150 atmospheres into a copper spiral where it expanded to atmospheric pressure. The cold emerging gas precooled the coil. From a warm start, liquid air would start to collect in a vacuum flask placed under the coil in less than half an hour.

The device was met with a mix of irritation and incredulity by the established figures in the field, as on the very day that Hampson filed his patent the engineer Karl Linde, who had built a business on highly efficient ice makers based on dimethyl ether and ammonia, had demonstrated a huge machine that did the same thing but took days to cool. Yet, when a year later Dewar wrote a description in Nature of his own apparatus to liquefy air and hydrogen, Hampson was stung by the similarity to his own machine. He replied with a letter accusing Lennox and Dewar of filching his ideas, but did himself no favours by suggesting that William Crookes had invented the vacuum flask and not Dewar. Dewar was enraged. An increasingly heated (and hilarious) exchange followed, including a very public spat between the two at a meeting of the Society of Chemical Industry. And Linde wrote a letter to Berichte suggesting that Hampson didn’t understand how his device worked, but stopped just short of accusing him of having stolen the idea.

Unfazed by the controversy, Hampson licensed his patent to Brin’s Oxygen Company, which used barium oxide to selectively absorb and release oxygen from the air. Hampson set up a machine at Brin’s works in the Horseferry Road, Pimlico; production began in 1898.

Just up the road at University College William Ramsay and his student Morris Travers had isolated the new element argon from the air. The pair surmised that the air might contain other gases and needed liquid air. But the cantankerous Dewar refused to help. In 1898 Ramsay contacted Brin’s. Working outside of normal hours when the compressor was free, Hampson, probably travelling by hansom, would deliver a litre or two of the precious liquid to Ramsay’s labs, which were conveniently across the street from where he lived. In six weeks’ intense work Ramsay and Travers found three more elements: krypton, neon and xenon.

Hampson remained with Brin’s quite briefly. Perhaps through Ramsay’s auspices in 1900 he delivered adult education lectures at University College. He also studied medicine, and would later report on the use of electrical impulses to regulate the heart. He also wrote a political booklet Modern Thraldom decrying the evils of credit and prophesying a dark time when banks would create a system of economic enslavement.

But in Germany, Linde stayed focused, developing improved liquefiers that Brin’s would soon license. He would then invent methods to fractionate the various components of air; cryogenics were soon commodity chemicals. What would Hampson and Ramsay think, if they found out that today that their precious liquid, so transformative of science generally, is now cheaper than milk? Linde had the last laugh.