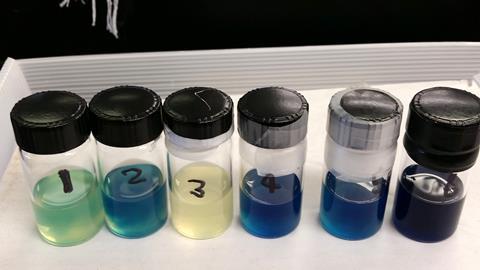 I am a staunch parafilmer, and an avid Twitterer – so much so, that I even made a meme about parafilming. Most chemistry labs have a few rolls of parafilm for wrapping around caps of bottles and vials. It’s great for keeping things tidy, clean and sealed, and I had always assumed it also kept air and moisture out. So imagine my surprise when a colleague saw my meme and told me that they believed parafilm did very little to protect reagents. Rather than argue about it, we discussed how to test our beliefs with an experiment. My resulting Twitter post of photos of vials with fading ketyl attracted a lot of attention.

Experiment time. each has dilute ketyl in THF.
1) Just the cap.
2) Teflon tape on threads
3) Teflon tape outside
4) 1.5 turns parafilm
5) 5 turns parafilm
6) 3 turns electrical tape
Removed from glovebox at 1:00 pm, Oct 20th. Any bets as to the winner?@MarkStradiotto pic.twitter.com/V6GERXoP0i

If you have not had the pleasure of using ketyl, it is a vividly coloured species that forms when benzophenone reacts with sodium, typically in ethereal solvents. The radical anion formed by a single electron reduction is deep blue, and the dianion is red, so these solutions often take on a deep purple colour. However, ketyl quickly reacts with oxygen and water to form colourless species, making it an excellent way to test if a solvent is dry. In many commercial ‘anhydrous’ solvents the colour of a single drop of ketyl solution added to 10ml of solvent will not persist, but we can usually get our ethereal solvents to stay blue with this test after storing them over molecular sieves.

I’m a relative newcomer to worrying about water and oxygen in chemistry. My training was in total synthesis, and while water would ruin most reactions, the excesses of reagents and the large scales we worked with typically hid a lot of effects of water incursion. My undergraduate lab did have a beautiful tetrahydrofuran (THF) still, where dry THF is distilled on demand from sodium and benzophenone. Then in my postdoc I learned a new level of care (and a new definition of dryness), since we aspired to low loadings of water-sensitive metathesis catalysts.

The cationic phosphorus and boron compounds my group works with now are moisture sensitive, though usually forgiving of oxygen. My students like to seal their samples with electrical tape inside the glovebox. Outside the glovebox we mostly use parafilm to protect previously opened bottles of commercial reagents. We had been doing things the same way for years, but I gained a new interest in sample-sealing in a recent lab move, during which we had to move all of our air-sensitive samples. (I might have bought out the Tupperware and electrical-tape supply of our local grocery store.)

My colleague’s comment on parafilm got me wondering how best to test its effectiveness. I settled on making a solution of ketyl indicator in tetrahydrofuran, and dividing it among six vials that had cheap phenolic caps with coated paper liners. All had been stored for weeks inside our glovebox. I sealed each vial in one of the common ways used in my lab. One cap was used as-is, one had Teflon tape on the threads, one was wrapped with Teflon tape on the outside, one had 1.5 turns of parafilm, one had five turns of parafilm, and one was wrapped with electrical tape. Then I took the vials out of the glovebox, posted about the experiment on Twitter, with photos, and waited.

In my experiment, the vial with electrical tape lasted the longest (about 3.5 hours). The parafilm did make a small positive difference, and Teflon tape on the inner threads was more effective than putting it on the outside. Many people on Twitter had high expectations of the Teflon tape, so there was a lot of disappointment when it dropped out of the race relatively early. Just the plain cap lasted about one hour.

I was impressed by how engaged Twitter was, and a lot of people rapidly pointed out further things to test, or variables I had not considered. After my first post started getting traction many people alerted me to an excellent publication by Miriam Bowring and students from Reed College, called Evaluation of Air-free Glassware Using the Ketyl Test, which performed a similar test on common glassware much more scientifically. They quantified the ketyl concentration and performed replicates, unlike my experiment. They found variable results with taped vials, so take what I observed with a grain of salt!

I’ve been asked if I will still parafilm after this, and the answer is… yes. There’s an old adage that a day in the lab can save an hour in the library, and I have since learned that while parafilm is an effective moisture barrier, it is air permeable. Since we live next to the ocean, moisture is always a consideration, and I have faith it helps keep my reagents dry!