Watt a way to redefine the kilogram 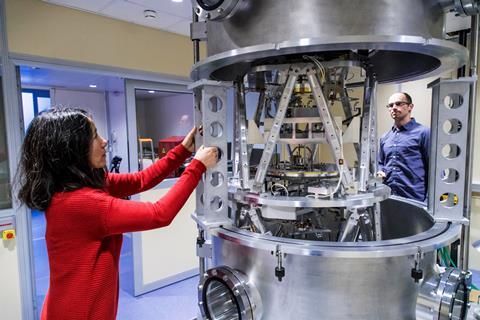 Formerly known as the Watt balance, this neat bit of kit has been renamed the Kibble balance in honour of its inventor

In a problem written for a recent revision workshop on NMR spectroscopy, a colleague quoted the value for the gyromagnetic ratio of the proton to 10 significant figures. I stared at the number in astonishment. What on earth would possess someone to measure anything with that level of deranged precision? And what kind of person might they be? A quick scan of the literature revealed British physicist Bryan Kibble, one of the key figures in the redefinition of SI units.

Kibble was the youngest son of a police sergeant who lived in Letcombe Regis, south of Oxford. Growing up he fiddled with bicycles, repaired radios and rebuilt clocks and watches, activities that no doubt contributed to his abilities as an experimentalist, and was awarded a scholarship to study physics at the University of Oxford. He would later recall a practical in which he was stunned by the perfection of the reflection of a needle placed at the centre of a soap film distorted by a small pressure difference, spherical to within the wavelength of light. When he remarked on this, his tutor said ‘Ah! You see, nature is exact.’

After graduating with a PhD in atomic spectroscopy, he married fellow student Ann Greenfield. The early 1960s were a difficult time in British science, with numerous ambitious researchers finding better paid academic jobs in Canada and the US. The Kibbles were no different. Two years later, however, they returned to Britain, both having been offered jobs at the National Physical Laboratory in Teddington, one of the world’s centres of metrology and standards.

Kibble’s work focused on verifying and improving the fundamental units of electricity. The Ampere was defined in terms of the force of attraction between currents flowing in two wires of infinite length. Carefully wound coils suspended from the beam arms of a current balance approximated the infinite wires, and optical levers monitored their motion. The precision of these devices was, however, limited. There were also growing questions about the reliability of the cadmium/mercury Weston cells that had been the voltage standards for over half a century.

The discovery of the Josephson junction in 1962 offered a way out. Irradiating a niobium wire, inserted into a blob of pure tin solder at liquid helium temperature, with microwaves produced a voltage that rose in steps proportional to Planck’s constant h and to the applied frequency. By the late 1960s the rise of the microelectronics industry meant that thousands of these devices could be fabricated on a single chip, with the promise of generating a voltage precise to 1 part in 1014. By 1972 efforts began at the NPL to use the Josephson effect to determine Planck’s constant to new levels of precision.

Kibble was at the centre of all this, refining balances to measure constants, including the gyromagnetic ratio of the proton, to unheard of precisions. The idea emerged that fundamental constants might be used to redefine SI units. 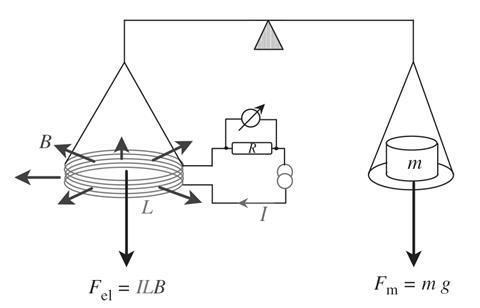 In 1976 Kibble presented a balance based on a supremely elegant principle that would eliminate many of the earlier uncertainties. His idea was to compare the force of gravity on an object with the force of attraction generated by a current in a coil of wire of length l sitting in a magnetic field, B. First the object to be weighed, M, is placed on the pan, and a current applied to bring the two sides into balance. The current is measured through the voltage drop across a precisely known resistor, the voltage being measured by an array of superconducting Josephson junctions.

In the second step, the mass is removed and the coil is moved in the magnet at precise speed, u, to induce a voltage in the coil:

The voltage is again measured using the Josephson junction array, with the movement of the coil followed by observing the interference fringes of a laser interferometer placed underneath the balance. The combination of the two steps meant that the magnetic field and coil term Bl could be removed, leading to an exquisitely simple relation:

Through this equation the mass can be measured directly in terms of fundamental constants, h, e and c. Each side of this equation has the dimension of watts, so Kibble called his device a Watt balance. He could achieve precisions of 1 part in 108 (10mg in 1kg).

The prototype stirred a flurry of interest. With a balance so delicate it became possible to envisage the redefinition of the kilogram in terms of fundamental constants rather than physical objects. After Kibble’s death the balance was renamed in his honour.

Kibble retired from NPL in 1998 to become an itinerant consultant. He also revealed the secret of being a metrologist: ‘persistence to the point of obstinacy, obsession with the problem in hand, determination to spend as long as it takes to overcome it, and the need to get the best possible correct measurement in the end, which might be years.’ It explains why I never became a metrologist.

I am indebted to that supreme metrologist Michael de Podesta (@Protons4B) for suggesting Kibble long ago and setting me straight on many matters.