Illuminating the dark corners of science

Historians often refer to 1848 as the Year of Revolution, when Europe was wracked by popular uprisings against absolutist monarchies. These revolts, echoes of those in 1789, would find voice in the writings of Friedrich Engels and Karl Marx, and lead to the 1917 uprising in St Petersburg that would sweep away the Russian emperor and his court. But did these revolutions really change anything? In Russia, for example, the corrupt and self-satisfied aristocracy has been replaced today by a shameless, nouveau riche kleptocracy. Plus ça change? 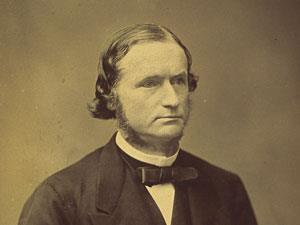 Perhaps the real year of revolution in Europe was not 1848, but 1859. Its heroes were not wild-eyed cobblestone-lobbing fanatics; they were respectable scientists, and the quietest of these would start physical science on an unstoppable path.

Gustav Kirchhoff was born in Königsberg, one of the old Hanseatic trading ports on the shores of the Baltic sea (today the Russian enclave of Kaliningrad). He studied physics there under Franz Ernst Neumann but, as soon as he had the title of privatdozent, the German licence to teach, he moved to the capital Berlin to further his education. At age 26 he was appointed professor ‘extraordinarius’ at the University of Breslau (now Wroclaw in Poland). It would be a fateful move, for in 1851 the restless but brilliant chemical experimentalist Robert Bunsen, 15 years older than Kirchhoff, accepted a position as professor of chemistry at the university.

Bunsen, whose interests ranged widely, had developed a very robust zinc–carbon battery that he used to verify Michael Faraday’s discovery of the link between chemistry and electricity. By the time he got to Breslau, he was using his battery to liberate metals, as Jöns Jacob Berzelius and Humphrey Davy had done before him. He developed an interest in photochemistry, inspired by the brilliant light of magnesium, and it was around this time that he met Kirchhoff, who, one wag put it, ‘was the most important discovery made by Bunsen during his short … residence in Breslau’. A year later, Bunsen would succeed the great inorganic chemist Leopold Gmelin at the University of Heidelberg, and ensured that Kirchhoff was appointed to the corresponding chair of physics, permitting the continuation of their experiments.

Kirchhoff, who had already established his reputation by developing Ohm’s law and showing that electrical signals travelled at the speed of light in conductors, had begun to try to unravel the enigma of the solar spectrum. In 1814, the lensmaker Josef von Fraunhofer had developed Isaac Newton’s experiment of dispersing sunlight with a prism by bringing the light to the prism through a narrow slit, revealing dark lines in the spectrum. William Wollaston had done this before him, but Fraunhofer’s improved optics allowed him to carefully map 574 of these lines, the origin of which was a mystery.

Kirchhoff was unaware that others – including Léon Foucault, David Brewster, William Herschel, George Stokes, John Tyndall and Anders Ångström – had performed similar experiments. Yet although they came tantalisingly close, none realised the true import of their observations. Kirchhoff showed that the bright lines he saw in his spectroscope when he observed the light from a flame turned into dark shadows when the flame was illuminated from behind by one of Bunsen’s brilliant lights. In an experiment of extraordinary delicacy, Kirchhoff brought the light from both the sun and a flame to the slit at the front of his spectroscope, and then introduced salt into the flame. The bright lines from the flame lined up exactly with the dark lines of the sun – emission and absorption were conjugate processes. There could be only one conclusion – the sun and stars were made of the same atoms as the everyday world. In letters to his friend Henry Roscoe, Bunsen gives a breathless account of ‘sleepless nights’ with Kirchhoff as they introduced everything they could into the flame. Bunsen realised this was an exquisite analytical method, capable of detecting microgram quantities of the elements. 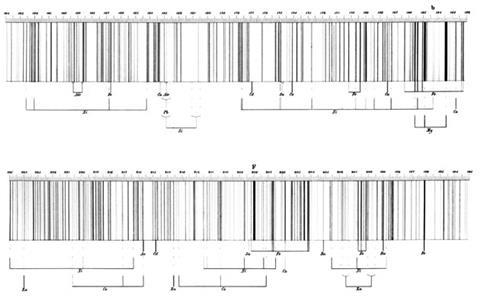 Together they discovered two unknown elements: rubidium and caesium (named after the prominent red and blue lines in their spectra). Kirchhoff meanwhile mapped out the solar spectrum, having dispersed it across a length of almost three metres. He began developing a theory of radiation that would lead to the understanding of radiative equilibrium, laying the groundwork for the black body concept and its practical realisation. This led to work on diffraction and thermodynamics, first in gases and then more generally; Kirchhoff’s Law linking enthalpies to heat capacity remains in all the textbooks. He would publish papers in acoustics, elasticity and fluid flow, always penned with quiet precision. ‘It is the object of science,’ he said, ‘to describe natural phenomena, not to explain them.’

The spectroscope was soon the pre-eminent tool of elemental discovery and analysis; it paved the way for quantum theory, and led astrophysicists to the shocking realisation that the universe is expanding. Today, chemists live and die by a bewildering range of spectroscopies.

And if the start of modern physical science wasn’t change enough, 1859 also saw the publication of Charles Darwin’s On the origin of species that November. It was a revolutionary year indeed.