I recently delivered an address at a presentation evening at a local school where I was introduced to the audience as an organic chemist. At the reception which followed, I was approached by a parent who congratulated me heartily on my lifestyle choice of being ’organic’ and I was asked if I also supported the Soil Association!

On reflection, I believe that it is unfortunate that we have allowed the chemophobes to steal our clothes. Can we not establish copyright based upon historical precedence?

As I looked through the February 2009 issue of Chemistry World  , I was struck by the dominance of males in the photos that showed people. The position is even more stark if the Obama science team members are removed, since it has 60 per cent females, and even the TDA ad has a picture of a male science teacher (plus a boy and a girl). The article by Emma Davies on perfumes has a male scientist as the only face shown. On p50, a negative cartoon of a woman is shown (in another article by Emma Davies) and on p51, the women is standing behind a man, in his shade.

At the recent South East Region meeting at Burlington House, three women members were present, and around 40 men.

I believe the message is very clear about the position of women in chemistry!

The answer to John Davis’s question (Chemistry World  , January 2009, p40) can be found from experiments made some 200 years ago by Joseph Priestley. His experiments with oxygen were encouraged by his friends Boulton and Watt who saw that a combustion of oxygen and hydrogen in a closed vessel could resolve the much debated question as to whether heat had weight. Priestley provided the answer, but the droplets of fluid found inside the vessel confounded the chemists of the day since they were expecting them to be water but were found to be dilute nitric acid! It must be concluded that his starting mixture of gases was contaminated with nitrogen but were most unlikely to have contained any hydrocarbons. QED.

John Davis raises the question of whether thermal NOx will be produced by cars using hydrogen as fuel. I can at least in part answer this question. There are two mechanisms for thermal NOx formation: the Zeldovich mechanism and the ’prompt’ mechanism. The former does not require a hydrocarbon fragment but the latter does. It can therefore be inferred that the Zeldovich mechanism would not be precluded by the use of hydrogen fuel.

Some coverages of the subject distinguish prompt NOx from thermal NOx. That is however immaterial to this discussion.

I ended up in the water industry and am still consulting at the age of 80 on process and hydraulic matters. Chemists should not be scared of chemical engineering textbooks. Incidentally, I have encountered civil engineers who do not know the difference between a chemist and chemical engineer.

What an excellent and well-written comment piece on chemistry and chemical engineering. The need for interdisciplinary research and development is often quoted, and a simple idea such as the ’Ten things...’ is a great way to demystify some of this and start people talking.

Initiatives such as Nottingham University’s Driving Innovation in Chemistry and Engineering (Dice) and the new Centre for Sustainable Chemical Technologies at Bath are bringing chemistry and chemical engineering together, which will undoubtedly lead to better exploitation of new technologies. At the Chemistry Innovation Knowledge Transfer Network we have worked with our academic and industry partners to provide guidance for working together; much of which is based on explaining each others’ business models and pressures.

Might I suggest the ’Ten things.’ treatment is now given to chemists’ relationship with biochemists, geneticists, material scientists and, if we are feeling really bold: product designers, journalists and politicians?

Readers will be saddened to hear about the passing of Richard Cookson FRS in December last year at the age of 86. He was a distinguished organic chemist who pioneered many new routes to chemicals of biological and industrial importance, often discovering new reactions along the way.

He was a man of huge intellect and could discuss any subject with authority, dinner parties at his house were always fun. He was the kindest human being I have known and his positive influence on his students, who have now become senior academics and industrialists, will live for many years to come. 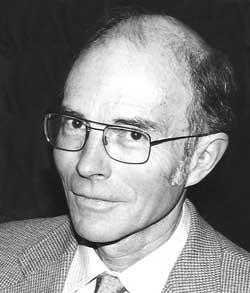 He read chemistry at Cambridge University and stayed there to carry out postgraduate research with the late Dr F G Mann. After gaining his PhD, Cookson moved to Harvard University to work with the Nobel laureate Robert Burns Woodward, where he worked on natural product synthesis and fell in love with fellow postdoc, Ellen Fawaz. They married in 1947 and had two sons, Clive and Hugh, both of whom studied chemistry. Hugh subsequently joined his father in the family business, while Clive went into science journalism and is currently the science editor of the Financial Times  .

After retiring from Southampton in 1985, he set up Cookson Chemicals with his son Hugh and me. His academic and industrial expertise became the basis of a very creative company that synthesised otherwise unobtainable compounds for pharmaceutical research.

The company was very much Cookson’s chemistry set and he delighted in visiting the labs on a weekly basis to discuss innovative new ideas that could be of commercial importance. He remained chairman of the company through the merger in 1994 with Tocris Neuramin to form Tocris Biosciences - and continued playing a creative role in the company until 2006.

His death leaves a hole in the chemical community and he will be sadly missed by all his friends.

In his letter ’Quinine mystery deepens’ (Chemistry World  , July 2008, p 36), Roman Sioda asserts that Paul Rabe and Karl Kindler (R-K) in 1918 (Ber. Dtsch. Chem. Ges., 51, 466) did not achieve the partial synthesis of quinine from quinotoxine as they reported. R B Woodward and William Doering based their now classic formal total synthesis of quinine (J. Am. Chem. Soc., 1944, 66, 849) on Rabe and Kindler’s representations. In 2007, Jeffrey Seeman published a detailed historical study of the work (Angew. Chem. Int. Ed  ., 46, 1378). Based on the available data in the literature, in archival materials, and in-depth interviews with key participants in this chemistry, Seeman concluded: ’that Paul Rabe and Karl Kindler did convert d  -quinotoxine into quinine as they reported in 1918’ and ’that the Woodward-Doering/Rabe-Kindler total synthesis of quinine is a valid achievement.’

Sioda mischaracterised an unenviable but real shortcoming of R-K’s 1918 ’Preliminary notice’. R-K only published a brief outline of the experimental conditions of their three-step transformation of quinotoxine to quinine. The ’quinine mystery’, if ever there was one, was why R-K never published their full experimental details. 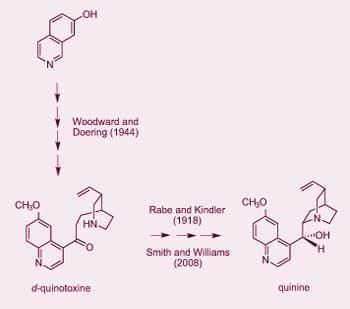 Sioda writes, ’It seems to me highly improbable that the original investigators of the 1918 paper could really have obtained quinine...’ In 1918, R-K reported isolating ’2g of analytically pure quinine. Quinine melted as required at 177?C and had an optical rotation [identical to natural quinine]’. In 1939, R-K reported (Ber. Dtsch. Chem. Ges., 72, 263), ’We had preserved the leftover residues [from 1918 and] from this in the usual way, the still present quinine was removed as the poorly soluble neutral tartrate’. Is Sioda alleging that both the 1918 and 1939 publications of Rabe and Kindler were fabricated?

Sioda says, ’I believe that it is highly improbable that the prescription of the synthesis in a study by Rabe and Kinder... could really have worked without today’s technology.’ Sioda’s belief is absolutely inconsistent with Smith and Williams’s 2008 publication (Angew. Chem. Int. Ed., 47, 1736) who followed the entire R-K protocol successfully and without the use of any modern methodologies or technologies.

Sioda says, ’I believe that quinine was not actually isolated [by Smith and Williams] from the tartrate salt in the stated amount...’ He does not specify the basis for this belief. In contrast, Smith and Williams report full experimental details of several reaction sequences in which quinine is obtained by them and by one independent colleague.

Sioda states, ’It seems to me that, before 1918, the proper analytical knowledge of the separation of quinine and intermediates from other reaction products, especially quinidine in the final reduction reaction, was unknown.’ In 1918, R-K reported isolation ’besides 0.9g quinidine, 2g of analytically pure quinine’. From that same reduction reaction mixture (retained for over 20 years), R-K reported in 1939 the isolation of additional quantities of quinine, quinidine as well as epi  -quinine and epi  -quinidine. Clearly, quinine was present in the reduction mixture and isolated in crystalline form by R-K in both 1918 and 1939. Prior to the modern era of organic synthesis, crystallisation was the major method of product purification. Chemists of that era were exceptionally talented in such techniques, in part because that is all they had!

In summary, Seeman’s 2007 historical study complimented by Smith and Williams’ 2008 experimental results conclusively establish the validity of the R-K synthesis of quinine from quinotoxine and obliterates all ’myths’ and ’mysteries’ of their seminal work.

The British Science Association’s Science and Engineering Week (6-15 March, 2009) is the most important annual opportunity for communicating science to the public. Sadly, many I speak to, including chemists, are unaware of the huge number of events that take place and the opportunities for people of all ages to catch something of the thrill and wonderment of science.

The full programme for the week is on the British Science Association website (www.britishscienceassociation.org).

I look forward to scouring the pages.