Called up to the lab

Life as a chemist in the second world war

Many chemists did vital work in the second world war, often in challenging circumstances. My father, Robert Hopkins, who died recently aged 100, was one of them. As a flavour of the times, here is a small selection from his reminiscences. 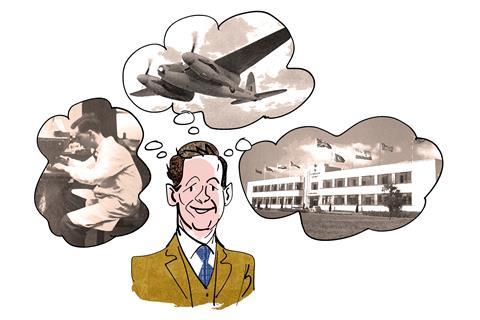 I was nineteen and halfway through a course in chemistry at the Regent Street Polytechnic in London when war broke out. The course was speeded up by increasing the number of lectures at the expense of practical work, and the final exams took place in summer 1940. Practical exams were in a one storey wooden building in South Kensington, and we were periodically chivvied into a more solid place when the exam observer thought planes were rather too close. Gas pressure for the Bunsen burner was low and work was difficult even when you knew what to do.

On receiving my call up papers I was allowed to take up a job in the laboratory at the De Havilland Aircraft Company in Hatfield. The lab in January 1941 was very small and consisted of the aircraft division metallurgist (‘The Boss’), an apprentice and me. The lab steadily increased in size and was staffed by people with varying skills or no skill at all. My closest colleague was also a chemist and we were not allowed to cross the main road together in case we were both knocked down.

The work we did was varied. Process control included heat treatment, electroplating and surface treatment, and we got to know some of the process operators quite well. One, a perfect gentleman who addressed me as ‘Mister Robert’, had been a Rolls-Royce chauffeur before the war, and still used wire cutters marked RR. Another man, an ex-miner, handled a wide variety of unpleasant treatment baths with care and efficiency. I have a cherished memory of the tool hardener sitting on a metal drum pouring out his coffee. The drum held a quarter of a ton of cyanide. Health and Safety at work?

We were expected to give an opinion on anything. The weight of fabric, the moisture content of wood, strength of a glued joint, ‘what is wrong with this sheet/wire/tubing/paint?’ Mostly we coped, but assessing the problem with a sample of milk from the canteen was really rather beyond us. The Boss drank some and made a vague remark that he would be glad to have as good at home.

In 1941 the main aircraft in production was the Airspeed Oxford, which introduced De Havilland to the black art of spot-welding aluminium alloys. The process occupied a fair proportion of the lab effort. One of the secrets was to obtain a uniform finish on the aluminium, for which we used two vicious solutions. Handling half a litre in the lab was one thing, but 300 or 400 gallons in the workshop was quite another. We were lucky not to have any serious accidents, especially as the tanks originally supplied were none too resistant and had to be replaced quite hurriedly.

Oxford production gave way to the Mosquito, which was the reason for the new lab at Hatfield. The idea that you could build a bomber that would be faster than any fighter, English or German, and you could build it of wood (birch ply, spruce, balsa) took some selling to the authorities but in due course it was. Low temperature thermometers were used to find out how cold it was at high altitude. These thermometers did not contain mercury, which would have frozen, but a spirit coloured red so it could be seen. When they came back, the dye had been bleached by high altitude ultraviolet light. To protect the plane from these conditions, it had a layer of aluminium pigmented paint underneath the camouflage. Under this was a layer of fabric, linen on top of the plane, fine cotton on the rest.

Increased production required more space, and so we moved into factories whose businesses had disappeared during the war. There were also sub-contractors to work with. One had difficulty bending steel sheet and asked if something a little less strong could be supplied. CWS furniture made wings and thought it unreasonable that a 50-foot wooden structure should have to be made to a tolerance of 1/10 inch. Quite different were Hoopers, the coach builders for Rolls-Royce. They worked out a way of speeding up the setting of the synthetic glue by heating, which we had to approve. Early planes were glued with casein glue from goats’ milk but synthetic resin glue, based upon technology brought from Germany in 1939, was much more water-resistant.

My father continued to work as a chemist for the rest of his working life, but I believe he looked back on this period with particular satisfaction.