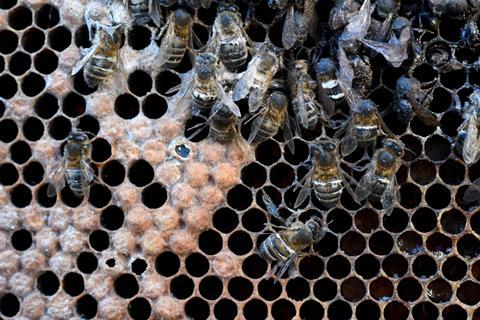 Bees are one of the beneficial organisms harmed by neonics

Neonicotinoids have become the world’s most widely used group of insecticides. Also known as neonics, they have lower human toxicity than the insecticides they replaced, and their systemic action renders all parts of the growing plant toxic to insect pests.

However, in the last decade it has become apparent that these compounds also have serious side effects.1 The active agent spreads into pollen and nectar in flowering crops, and the neurological blocking mechanism through which the neonic works harms beneficial insects, including pollinators such as bees, hoverflies and butterflies. Moreover, most of the active agent ‘leaks’ into the environment, causing collateral damage to a variety of beneficial organisms that provide invaluable ‘ecosystem services’ such as pest control and soil formation that increase agricultural productivity and crop quality.2

EU member states banned the three main neonicotinoid agents (imidacloprid, clothianidin, thiamethoxam) in 2018 and discontinued approval for a fourth agent, thiacloprid, in 2020. The question arises whether similar restrictions would be justified in other regions of the world – for instance in Africa, where there are limited data available on the use and effects of these pesticides.

There is widespread neonic contamination of honey and pollen

To answer this question, the InterAcademy Partnership (IAP) worked with the European Academies’ Science Advisory Council (EASAC) and the Network of African Science Academies (NASAC), led by the Academy of Science of South Africa (ASSAf), to bring together African experts in two workshops to examine the available evidence across Africa. Experts from 17 African countries from all geographical regions of the continent participated. In addition, over 200 studies from 28 African countries were reviewed. The final report brings together an unparalleled amount of information on the use and effects of neonics in Africa and flags many priorities for follow-up action by policy makers and the scientific community.3

The evidence indicates that all African countries are using neonics. There is widespread neonic contamination of honey and pollen, and neonic residues have been found in the few studies conducted on soils and water bodies. We found no reason to expect that neonicotinoids’ adverse side effects on non-target organisms such as pollinators should be any different in Africa than in Europe. Honeybee populations appear to be in general decline, as are other species including edible insects as well as insectivorous birds, although work to assign causative factors to these trends has not been conducted. Resistance is emerging in some vegetable pests where neonics are routinely used. In commercial cocoa plantations that use neonics to control mirid bugs, the natural pollination of cocoa flowers was strongly reduced and expensive manual alternatives had to be introduced.

Our report concluded that scientists and policy makers should urgently consider the implications of the widespread use of neonics on the sustainability of African agriculture. But this is easier said than done across so many countries, with their huge diversity of languages, culture, environments and crops.

Existing regulatory systems are often weak and outdated, and rely on manufacturer submissions and regulatory data from developed countries for approval decisions. Historical legacies mean that countries rely on different sources for their data: Francophone countries tend to pay more attention to French law’s stricter bans on neonicotinoids and strong protection of biodiversity than do Anglophone countries. But even if restrictions were applied uniformly along EU lines, enforcement is often lacking and counterfeit and illegal pesticides are not uncommon. Addressing these challenges will require dedicated regional and pan-African efforts to develop and unify regulations, and to develop effective mechanisms of enforcement.

One key to tackling these problems lies in independent agricultural advisory services. In many African countries, such services are provided by industry associations, which brings risks of bias in the advice dispensed to farmers. Instead of relying on (often prophylactic) application of pesticides, it is vital to promote integrated pest management (IPM), where pesticides are only applied when hygiene, physical methods and indigenous technical knowledge have not prevented a pest from exceeding a damaging threshold population. IPM offers farmers the opportunity to reap the benefits of ecosystem services provided for free by beneficial insects and other organisms. It also delivers sustainable agriculture, which is critical to the continent’s food security and maintains agriculture’s contribution to Africa’s rural communities and national economies. Promoting and supporting IPM should thus be a priority not only for advisory services and national governments, but also for development aid agencies.

There are also lessons that regulators in developed countries need to learn. Pesticide evaluations need to be reformed to better assess low-level and accumulative toxic effects and potential to damage ecosystem services; despite this, insecticides with a very similar neuroactive function to neonics have recently been approved for use. Even though opposition can be expected from industry, regulatory authorities urgently need to introduce more effective criteria that are consistent with sustainable synergy between agriculture and ecosystem services4 – and lessons shared with African nations.

3 NASAC, 2019, Neonicotinoid insecticides; use and effects in African Agriculture; a review and recommendations for policymakers