Chemists speak many different languages, but we also have a common tongue: chemical notation. This is especially true for organic chemistry and its detailed structure drawings, and it’s worth thinking about how every organic chemist is, in fact, multilingual.

We’ll start with basic chemical identity. When it comes to simple structures with common names, words still have the advantage. Saying ‘cholesterol’ is a faster way to identify that compound than showing its structure, because there are so many steroids that the eye has to rove around the various rings, checking the substituents and stereochemistries. But we can’t assign common names to every chemical: the word ‘cholesterol’ has meaning because we’ve memorised (more or less!) what its structure is, and we carry a body of knowledge about its properties and functions that we attach to the word. This is fine for commonly used substances, but is out of the question for the uncountable number of other compounds, both possible and real. 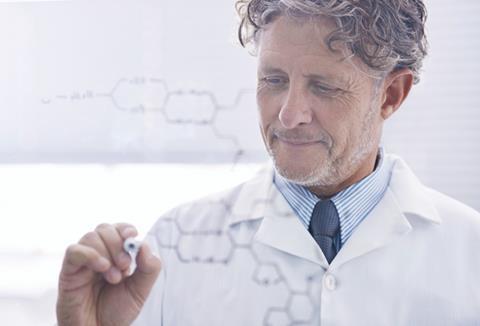 There are, of course, systematic naming schemes for compounds of all types, but these rapidly get out of control for practical use. The various condensed notations (such as Smiles strings) are not human-friendly, either; I’ve never met a chemist who could look at one of any complexity and immediately draw out the compound. But there’s the key phrase: ‘draw out the compound’. The drawing conventions of organic chemistry give us a means to immediately express a chemical’s structure.

It’s a stranger process than we generally realise. For those of us who don’t read a language like Chinese, organic chemistry notation gives us some idea of what it must be like. Here are complex ideographs, built from simpler underlying ones, that express complex meanings as the eye takes them in. The information is delivered in a different order and in a different way than text ever could. We may need to look at a structure for a moment to assure ourselves that it is cholesterol, but our eyes can recognise from across the room that its steroid backbone is present.

One big difference, however, between chemical structures and an ideographic language like Chinese is that the cholesterol structure is still ‘right’ even if it’s rotated or flipped – although its viewers would be irritated to find it drawn in non-standard fashion, with the five-membered ring somewhere other than the top right.

Not only chemical identity, but chemical reactivity can be rendered this way. An entire total synthesis paper could be laid out in nothing but such pictures, especially if you allow some pathways to have an ‘X’ through them to show roads not taken or reactions that didn’t work. There isn’t a standard notation to highlight the parts of a molecule that are changing or of interest – which is a useful thing for a complex synthesis – but there are several graphical techniques that will work.

As a thought experiment, picture a five-step chemical synthesis written in structures and arrows. Now imagine its verbal equivalent. ‘First we took 4-methoxybromobenzene and converted it to the Grignard reagent with magnesium in tetrahydrofuran; then this was reacted with 4,4-difluorocyclohexanone to give 4,4-difluoro-1-hydroxy-1-(4-methoxy­phenyl)cyclohexane, which was…’ Enough – if I wanted to tell another chemist about this reaction, I would draw it. A structure drawing gets things across much more quickly and reliably. It’s also interesting to note that (for most chemists, surely) it does so non-verbally, even inside the head of the chemist looking at it.

The relationship of language to thought is a large, deep and murky subject, but it’s safe to say that no chemist, looking at the structure diagram of the reaction above, would ever mentally read out the words given while comprehending the reaction. At most, the word ‘Grignard’ might come to mind when seeing the Mg notation above an arrow pointing away from an aryl bromide, but the rest of the reaction will probably be taken in without words.

Instead, it’s handled in that other language I mentioned, one with its own vocabulary, structure and grammar, but one that many of us don’t even realise that we’re speaking. It’s convenient, but it may well be more than that. Could chemistry as a science have advanced (or even existed in the first place) without it or its historical equivalent? I have a vivid imagination, but I can’t quite picture that.

Derek Lowe is a medicinal chemist working on preclinical drug discovery in the US. Read more from In the pipeline