There is no doubt that many of the world’s greatest achievements have been due to complete and utter dumb luck. Columbus was off by just a bit when he was trying to find a quicker way to sail to India, for example. The same holds true in science, and the entire discipline of synthetic chemistry can largely be traced back to Perkin’s half-baked theory that he could synthesise quinine in one step by cooking up aniline with potassium dichromate. By today’s standards the experiment was outrageous, but no one was laughing when Perkin got rich from the purple dye he isolated out of the resulting sludge (Chemistry World,  June 2006).

The same kinds of serendipitous discoveries occur in medicine. The pharmaceutical industry makes heavy use of high-throughput screening for lead compounds, so in a sense many drugs are discovered by randomly searching for a needle in a haystack. But I’m going to discuss a couple of variations; drugs that were found to have properties totally unrelated to their original intent, and ones that were stumbled upon completely by accident.

The phenothiazine class of neuroleptics falls into the first category. Around 1950, the French doctor Henri Laborit was looking for an antihistamine sedative to give to patients about to go into surgery. One of the compounds he tested, chlorpromazine, had such a calming effect that Laborit realised the potential to treat psychiatric disorders. Within a few short years, the drug was approved to treat schizophrenia under the trade name Thorazine, rapidly becoming the gold standard form of therapy.

The anti-anxiety drug chlordiazepoxide, aka Librium, was the first in the class of 1,4-benzodiazepines, and it was also synthesised accidentally. Leo Sternbach of Hoffmann-La Roche, something of a personal hero to me, had indeed set out to prepare a novel class of tranquilisers. But all of the compounds he made were duds, except for one. When he reacted one of his intermediates with methylamine, the electrons zigged when they should have zagged and an unexpected rearrangement product was produced. Librium, and its brother Valium, went on to become the most prescribed medicines of the 1960s and 70s. 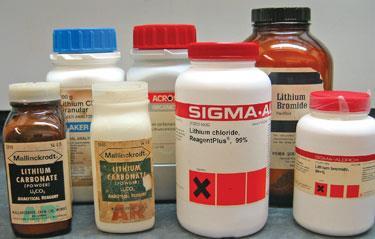 No discussion of unintentional blockbuster pharmaceuticals would be complete without mentioning Viagra. Do we really need to say anything here? Early clinical trials of a compound intended to treat chest pain produced some unexpected ’side effects’, suggesting that it might be better suited to treat an entirely different affliction. A similar story with minoxidil, which was originally approved to treat high blood pressure and later found to reverse baldness. The ultimate pair of male lifestyle drugs.

Everything mentioned so far has really only been pseudo-serendipitous, in that the compounds were at least intended to treat some medical ailment. I think it’s even more interesting when a medication is born out of thin air. Consider what has to be simplest drug of all, the lithium ion. Once upon a time it was thought that misregulation of uric acid might be responsible for manic-depressive disorder. The theory gained credence when it was found that mania could be tamed with the lithium salt of uric acid. Fast forward a few decades, and it became clear that any lithium salt had the same effect. With an atomic weight of just three, lithium thumbs its nose at Lipinski’s Rule of Five (a rule of thumb to predict whether a particular molecule would ever become a useful drug).

Valproic acid is another deceptively simple compound used as a mood stabiliser. As an oily liquid, it was commonly used as a carrier solvent in the biological testing of other compounds. That is until Pierre Eymard realized that it’s not so inert after all and was in fact the cause of the biological activity he was observing (thank goodness for controls). Finally, who would ever guess that a therapeutic agent could be derived from lab equipment itself? Certainly not Barnett Rosenberg, who was studying cell growth in an electric field. He discovered a remarkable inhibition of cell division (a hallmark of anti-cancer drugs), but only when he electrolysed using platinum electrodes. Eventually he realized that the platinum itself was reacting to form cis-diamminedichloroplatinum, later to be known as cisplatin. The drug is now a mainstay in chemotherapy.

The lesson to be learned seems to be that good medicines can come from just about anywhere. Whether it’s a chemical reaction gone awry, a solvent you thought was inert, or degrading lab equipment, if you wait around long enough you may catch some pennies from heaven.