Scientific training and experience are in many ways an ideal background for politics. Elected leaders must make informed policy decisions and this requires an appreciation of facts and data, as well as an ability to weigh evidence. Therefore, the success of a grassroots effort in the US to get more people with science and technology backgrounds into public office is not surprising, amid a perception that the Trump administration is attacking science while promoting so-called ‘alternative facts’. 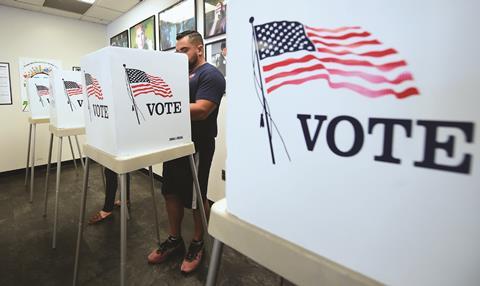 The non-profit 314 Action, created right after Trump’s election, kicked into overdrive during the 6 November US mid-term elections. The organisation put out a call for scientists to run for office and offered its assistance. Ultimately seven candidates that stepped forward were elected to Congress – many more became state legislators. Almost all of them are political newcomers.

For example, Jackie Chretien – a PhD-trained bioscientist who won her bid to become a New Hampshire state representative – campaigned on her scientific credentials. ‘I believe our laws should be evaluated with the same rigour and lack of bias as any peer-reviewed study,’ she stated. ‘I will bring strong analytical skills and a unique knowledge base to the statehouse.’

In response to the mid-term election results, many are enthusiastic about a seeming elevation of people with scientific expertise to America’s political realm. The hope is that they will help restore order during a time when objective truth is destabilised.

Serious challenges remain. There were several hardcore scientist PhDs in Congress just a few years ago, but today there is arguably only one. The rest have died or retired.

‘They really had well-honed scientific credentials,’ recalls Michael Lubell, a physicist at City College of New York and a former lobbyist for the American Physical Society. ‘Their colleagues looked to them because they respected them for their scientific credentials.’ He argues that most of the 314-sanctioned candidates who won races are only ‘loosely associated’ with science, not practicing researchers, including several medical doctors.

There is hope that a new science wave will reach Capitol Hill. A successful political career often starts at the state level, and significant new blood has entered this political realm. Beyond Chretien, for example, PhD microbiologist Jasmine Clark has earned a seat in Georgia’s state House. She serves as faculty at multiple universities in the state, and directed the March for Science in Atlanta last year.