How a new spin on separation produced petroleum, penicillin and much more 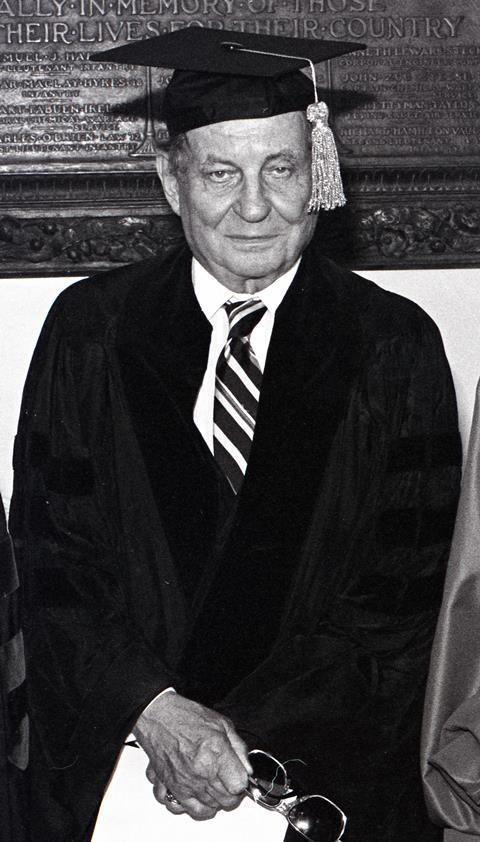 Polish–American chemist who, alongside his wife Władzia, developed the eponymous extractor

The first single I ever bought – from a school fundraising fair – was Blood Sweat and Tears’ Spinning Wheel with its lyric ‘what goes up, must come down, spinning wheel got to go round’. I was reminded of the song while reading about the story of penicillin, whose availability after the second world war was in no small measure due to the efforts of a pair of Polish–American inventors who spun the wheels of fortune and who never really came down, even when things went wrong.

Walter (Władisław) Joseph Podbielniak was born in Buffalo, the eldest of five children, to parents who had recently immigrated from Poland. Buffalo had a strong Polish community and, unlike many second-generation children, Podbielniak remained strongly attached to both the language and the culture. He studied analytical chemistry at Buffalo University, but also gained a reputation as a poet and a pianist. After graduating in 1920 he landed a job as an analyst with the National Aniline and Chemical Company in Buffalo, which controlled 75% of the dyestuff market in the United States and is said to have provided the indigo for every pair of jeans produced in the 1930s.

Although it was a natural destination for a chemist, perhaps the work was too dull and repetitive for his liking. After a stint as a teacher, he went back to school in 1923, this time to study chemical engineering at Ann Arbor, Michigan. By 1925 he had a BSc degree and started research with the young head of department, E H Leslie, who the fledgling Phillips Petroleum Company had consulted to help it understand the nature of what it was pumping from underground.

At the time, distillation was the only means of separating the many chemical components of the extracted gloop. The extreme complexity of the different crudes being pumped spurred several research groups to improve distillation methods – particularly because current techniques could only just separate components that boiled 10˚C apart. Leslie seconded Podbielniak to Phillips to work on the problem. There was no lab, and he and his colleagues set themselves up in a tyre store. Here Podbielniak began to build a rig that could start distillations from liquid air temperature, where even methane was condensed, right up to 300˚C. The fractionator consisted of a 3.8mm wide jacketed column containing a coil of wire wound in a spiral along its walls. Podbielniak began to separate not just propane, butanes and pentanes but even their individual isomers, at a time when their physical properties were largely unknown.

To the hard men of the wildcat wells, the strange chemical names were utterly mysterious; Podbielniak acquired the nickname ‘Pentaniak’. In return, he showed them that the reason that some crudes were so ‘sweet’ was down to the volatile alkanes that they had hitherto largely ignored. That sweet smell meant serious money. Respect came fast.

Returning to Ann Arbor, Podbielniak continued to improve his rig, which could now separate fractions less than 1˚C apart, significantly better than Fenske’s parallel work. None of his publications mention what technical support he received, but whoever made the delicate silvered Dewars, with observation windows at different heights, was an outstanding glassblower. Podbielniak used thermocouples to monitor the temperature and collected his fractions using liquid air. In 1928 he defended his thesis, and on the same day married Władzia Gajda, a fiery red-haired chemist, also Polish, with whom he headed off on honeymoon to California. This wasn’t to be simply a romantic idyll – California’s petroleum industry was growing fast. Within months the couple had cornered the market in analytical fractionators.

They soon moved to Tulsa in Oklahoma, the heart of oil country, where Podbielniak partnered with Russian emigré Paul Raigorodsky to do analyses and provide consulting services. The partnership lasted only a few years. Raigorodsky would later head to Texas where he made a fortune designing oil refineries for sale in the Soviet Union. He eventually fell under suspicion of communist sympathies and was a suspect in a possible conspiracy behind the Kennedy assassination.

Podbielniak, working with his wife, patented his fractionators, selling them like hotcakes. Their fraction analysers, huge beasts that occupied an entire wall of a lab, consumed huge amounts of liquid nitrogen at a time when it was not cheap. One wag commented that perhaps Podbielniak should have sold liquid nitrogen and given away the fractionators for free, a suggestion that has a very 21st century ring.

What if the fractionator were formed into a coil and spun?

Around 1930 the Podbielniaks moved to Chicago where they set up a company, Podbielniak Inc., to sell their devices. By now the couple had realised that the efficiency of fractional distillation was to some extent limited by gravity. This led to an intriguing idea: what if the fractionator were formed into a coil and spun? The result was a series of patents in the late 1930s for a centrifugal contactor, in which the vastly increased acceleration of the liquid compared to the gas permitted for a massive increase in theoretical plates, in which two phases establish an equilibrium with each other.

The Podbielniaks then realised that if one could use a centrifuge to do distillation, liquid–liquid extraction might work too. In 1932 they filed a patent for rapidly spinning disks containing a spiral groove. The lighter and denser phases would be fed in from the axis and the periphery of the disk respectively, drawing the liquids past each other along large distances. Centrifuges were already used to separate liquids (Gustaf de Laval’s cream centrifuge had transformed the dairy industry), but counter-current liquid extraction was new. The big advantage was compactness, high throughput and very small hold up. Over the next decade a dozen variants appeared, including versions with multiple parallel disks, then a continuous spiral shell wound around the axle, and later concentric cylinders with holes machined at carefully determined intervals to generate showers of droplets moving in opposite directions under the impact of the huge forces generated by the rotation. 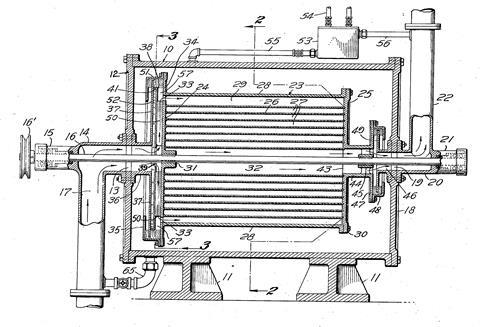 An improved version of the counter-current liquid extractor, from a patent filed by Walter Podbielniak in 1936

Podbielniak Inc. was very profitable. The Chicago Tribune classified section contains scores of advertisements for typists, draughtsmen and engineers. The company did its own marketing and there were whimsical full-page advertisements showing Pod extractors with arms in place of the axle, grappling with intractable chemical problems. As chemical engineering textbooks attest, the Podbielniak extractor represents an outstanding example of process intensification, reducing energy and space use by a factor of maybe 100 times compared to tall towers such as the Scheibel column. And applications there were aplenty, from oil and gas separation, to solvent extraction of minerals and the purification of vegetable oils. Podbielniak was even contacted by the physicist Leo Szilard, who hoped that centrifugal extraction could be used for uranium isotope separation. But it was in the isolation of penicillin that the extractor became truly famous. 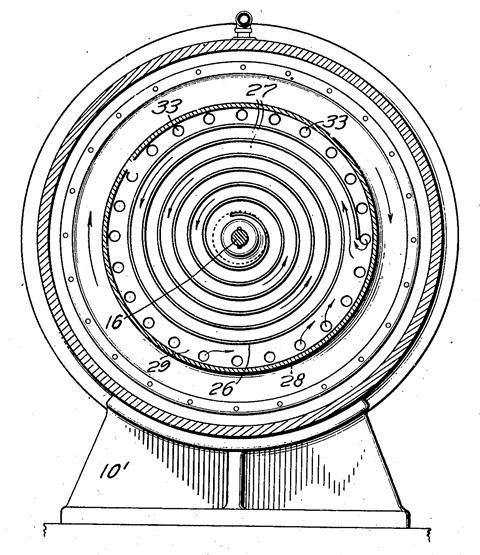 Spinning wheel, got to go round

When the Allies landed in southern Italy and Normandy in 1943 and 1944 the troops carried with them millions of doses of penicillin to treat war wounds – and also syphilis, gonorrhea and other sexually transmitted infections that were rampant in the civilian populations of Europe as a result of the war. The Podbielniak extractor made this industrial scale production possible.

Isolating penicillin involved an initial filtration of the broth containing the mould, acidification to a pH of around 2, and then extraction into a solvent like amyl acetate or even chloroform. The problem was hydrolysis. Under such acidic conditions the lactam ring of the penicillin degraded rapidly; speed was of the essence.

The solution came from a mushroom merchant from Pennsylvania. By 1932 Raymond Rettew and his partner were the largest producer of mushroom spawn in the US. In his spare time, Rettew studied the natural products of mushrooms in his home lab. Among these was penicillin. He began to imagine that it might be possible to scale up production of the compound for the war effort. Although his initial contacts with the Department of Agriculture were unsuccessful, eventually someone was sent to look at his experiments. That changed everything, especially as Rettew’s business partner had a relative who worked for Wyeth Pharmaceuticals. Sterile pilot scale experiments soon showed that it was possible to extract pure penicillin into banana oil. Thinking laterally, Rettew imagined speeding the extraction using a Sharples centrifugal cream separator, an analogue of Laval’s dairy device. This compact extraction method worked, but as the development chemists scaled up the process, they turned to Podbielniak’s much more efficient spinning concentrators to do the job of producing the millions of doses issued to GIs landing in Europe. The technology was seen as so strategically important that after the war the devices were not shared with pharmaceutical companies behind the iron curtain, not least in Poland, where the UN’s agency for reconstruction and rehabilitation (UNRRA) struggled to support efforts to contain disease in countries now under Soviet domination.

For the Podbielniaks the penicillin sales proved something of a bonanza. Walt (known in the industry as Pod) was crucial in the development of the company, but behind the scenes Władzia was pushing even harder, something he acknowledged in an awards speech he gave in 1951. As their wealth grew, so did their appetites. Władzia seems to have had an eye for cars and there were three wildly ostentatious automobiles, two Duesenbergs and a Delahaye Saoutchik, that remain head-turners as much today as they must have been back then. They invested in real estate and there was also a yacht, the largest on Lake Michigan.

But all was not well in the Podbielniak household. Irish physicist Collin Doyle joined the company in 1948 and Władzia and he became very close, with Doyle’s daughter being referred to in the society press pages as Władzia’s ‘ward’. Eventually the affair came out into the open, leading to an acrimonious divorce. The yacht was sold. So was the house, which was pulled down a few years later to make way for giant lakeside apartments. Another property was sold to the publisher Hugh Hefner, becoming the original Playboy mansion.

Doyle and Władzia would continue to develop rotating extractors under the name Liquid Dynamics. Podbielniak, on the other hand, agreed to sell his company to Dresser Industries, a large conglomerate, remaining as head of its operations. But he slowly wound things down. He married again and eventually retired quietly to California. His contactors still spin today; he really did ‘let the spinning wheel fly’.

I am grateful to Karen Podd for her reminiscences of Walter P, and Prof. Sławomir Łotyz for sharing his work on Podbielniak and the UNRRA penicillin project.