Pride comes before a fall

‘Against stupidity,’ said German poet Friedrich Schiller, ‘the Gods themselves contend in vain.’ Any chemist who’s taken stock of their lab accident stories will have recognised the accuracy of that one long ago. 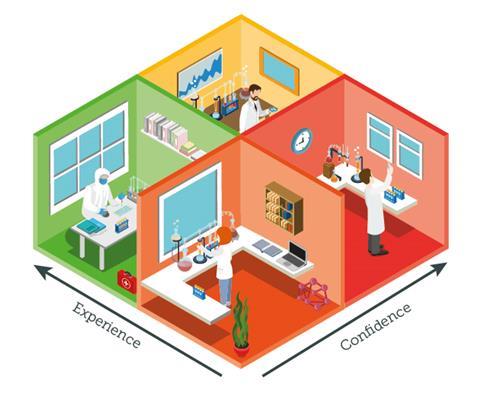 Stupidity, in one form or another, is a factor in the majority of incidents, and we’re never going to be able to get around that. I once had a summer student turn to me after I’d frantically unplugged his benzene still’s red-hot heating mantle from the wall outlet (his choice of power level) and ask: ‘What’s the problem? Benzene doesn’t burn, does it?’ I realised then that I was up against a power greater than my own.

But the relationship is more complicated than it appears. Avoiding people who don’t realise that benzene burns is certainly a good first step. But intelligent, experienced people also have lab accidents, unfortunately. Sometime it’s the experience itself that’s the problem. If you’ve done a particular reaction 10, 20 or 100 times, you may well not be paying as much attention as you were the first time. The human brain seems to prefer to go into autopilot mode as much as possible, and will happily allow as much go-through-the motions processing as it can get away with. Evolutionarily, that makes a lot of sense. Imagine trying to walk down a flight of stairs while constantly thinking about the position of your feet and the actions of your leg muscles! Having your brain run the standard ‘stair-walking routine’ works out much better.

Chemical reactions, though, are not well served by leaving them to muscle memory. There are too many variables and details, and they have to be paid the same care and attention on the 100th time as they were on the first. That’s not always easy. There’s a point at which ‘the ease of long practice’ shades over into carelessness, and there are plenty of bench reactions that will gladly let you know when you’ve crossed the line – generally well after it’s too late to actually do anything about it. Knowing exactly why your reaction is spewing all over the inside of your fumehood is of only marginal comfort at the time, especially when that knowledge includes the realisation that it’s all your fault.

I first ran into this problem during my PhD work. My total synthesis route was extended to nearly 30 steps, which meant that I was spending an awful lot of time making starting material and hauling it through the same sequence of reactions, over and over. That meant that 90% of the time I was bored, and the other 10% I was terrified, when I finally got up to the frontier step and had to risk my precious material.

Actually, that’s an oversimplification: there was a small percentage of the time that I spent neither bored nor terrified, but instead seething with rage and remorse, because I had messed up one of these done-that-before reactions by being too cavalier with it – and managed to ruin a batch of material that I definitely couldn’t spare. (I realise, looking over this, that the range of emotions I describe doesn’t make graduate school sound very appealing, but facts are facts!)

If we make a four-quadrant chart, with the axes being experience and confidence, some interesting conclusions come up. Probably the best combination for lab safety is a chemist who’s experienced but remains wary, difficult though that attitude may be to maintain.

Experienced and confident is next best, but (as detailed above), this is not a foolproof part of the chart. Then comes inexperienced but wary, the two cancelling each other out to a good degree. One thing that can go wrong here, though, is when caution shades over into fear – a nervous experimentalist will inevitably make some mistake or overlook something they actually knew to look out for.

At the bottom of the list, naturally, is the deadly combination of confident inexperience, the proverbial accident waiting to happen. When it arrives, it’ll be all the worse for its unexpectedness – well, to its author, if not to outside observers!