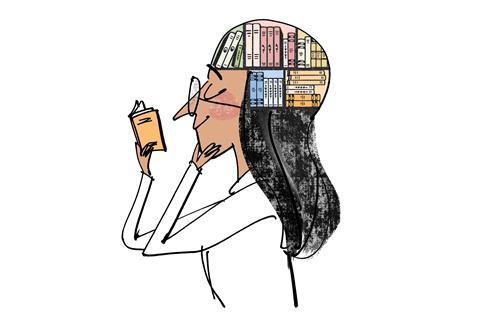 I liken my brain to a bookcase. Sometimes, it’s a beautiful array of colour coded and alphabetised set of books. All brand new, legible and descriptive. Other times it’s like the books have been thrown on the shelves at random. Some of the books don’t have titles, others have pages missing or are even back to front. How am I supposed to find the book I need?

I’ve rummaged through my brain and salvaged a few volumes I’d like to share. If you find the illogical order of these volumes frustrating, it’s a tiny snippet of what it’s like in my brain.

I sat in my local medical practice, aged 17. My doctor explained that while employers aren’t meant to discriminate against those of us who struggle with our mental health, they do anyway. This was the reason he didn’t want to put me on medication.

He thought I had generalised anxiety. While I knew that didn’t fully encapsulate my struggles, I couldn’t find the words to describe the problem at hand. As the years progressed my brain’s shelves filled with advice from other people, including ‘everyone finds university hard,’ and ‘everyone struggles with focus and procrastination’. I knew that all of this was true, but why did I feel as if I was drowning while everybody else was staying afloat – and having fun while they did it?

When you’re young, all you want to do is fit in. When it became apparent to me that I wasn’t the same skin colour as the majority of kids at my school, I realised other things came with that. I felt embarrassed when my mother would send me to school with chapatti in my lunchbox. All of the other kids had sandwiches. I didn’t want another reason to stand out, so I’d usually bin them. I was too embarrassed to eat them. As I grew older, the racial differences between myself and my peers became more and more apparent, with instances of discrimination at the forefront of my mind. I also found little interest in boys, yet they were the talk of the town. I found much solace in learning and books.

I was privileged and very fortunate to have a South Asian science teacher in a school where there weren’t many of us. Miss Hanif was the epitome of a strong, confident and independent woman of colour. Simply by existing and being visible, Miss Hanif was a strong influence in my life. But she did more. Through her, I received the opportunity to pursue a short Open University science module about medicines and drugs.

This course, in addition to encouragement from my elder brother, is the reason I pursued chemistry further. If you’d have told me then that in future chapters of my life I’d go on to work for Pfizer during my undergraduate degree and then pursue a PhD partly funded by AstraZeneca I wouldn’t have believed you!

Despite all of my success, I was still aware that something wasn’t quite right. But if I was doing this well, how could there possibly be anything wrong?

The day I received my diagnosis was one of the best days in my life, because everything started to make more sense. Attention Deficit Hyperactivity Disorder. ADHD. Controversially named, because those of us who have it don’t have a deficit of attention, and not everybody who has it is hyperactive. I could write a book on the misconceptions of ADHD – as long as I could find the right book in my head first.

I finally understood why I struggled with things other people found so simple, but also why I excel in areas others struggled with. I’m not the only one. Bill Gates, Emma Watson, Richard Branson: the list of neurodivergent people who have made an exceptional impact on our world goes on.

During the year of struggle that was 2020, I phoned my brother, upset. As a young, queer, neurodivergent Indian woman in science, I felt alone. I didn’t have any representation. It dawned on me that I had to be the representation that I needed. I had to speak out. I had a flashback to what my doctor told me, and I felt apprehensive all over again.

But I couldn’t be a bystander anymore. If I didn’t say anything, then what happens to the next generation of mini Nishas who would struggle in the same way that I did?

I am different. With difference comes diversity of thought, expression and research. Difference leads to innovation and a drive towards a more inclusive and united society. I hope that my visibility provides optimism and the confidence of a voice to minorities. Finally having an explanation for the literary chaos that is my brain means that I can begin to view the way I think with curiosity, as an asset, instead of a problem. After all, if you change the way you look at things, the things you look at change.