On the centenary of Giacomo Ciamician’s prediction of a solar-fuelled future, international experts discuss artificial photosynthesis

Global energy security is a grave and urgent concern. As the world’s population increases, our persistent reliance upon convenient fossil fuels for energy leads to an increase in carbon dioxide emissions, which will in turn contribute to global climate change.1,2 The consequences for the environment and human life are potentially catastrophic, so it is crucial that we devise strategies now to reduce our dependence on fossil fuels. A sustainable energy future demands alternative energy sources and technologies that can cut the tie between energy use and net carbon emission. 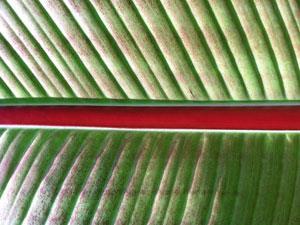 The most abundant renewable energy sources are intermittent – the sun sets; the wind ceases to blow – and thus require some form of storage. For billions of years, our biosphere has harnessed the sun to create fuel through photosynthesis: capturing, converting and storing solar energy in the form of chemical bonds. Fuels possess a large power density, especially compared to other forms of energy storage such as batteries, and are essential to modern transport systems. But large-scale schemes to substitute biomass-derived fuel for fossil fuels could place significant pressure on already fragile ecosystems and raise serious concerns regarding land use tradeoffs between food and fuel.3

Rather than exploiting the products of natural photosynthesis for fuel, we can instead exploit our knowledge of photosynthesis to create artificial photosynthetic systems.4-6 Thanks to intense work in this area in recent years, we now have a detailed molecular understanding of photosynthetic structures and mechanisms,7 which enables us to mimic aspects of the biological process to produce solar fuels. As an example, manganese and calcium are components of the oxygen-evolving complex in photosystem II, the water splitting enzyme of cyanobacteria, algae and plants. These elements could also be used in a water-oxidising catalyst in human engineered systems. Indeed, there are already examples of such catalysts and others are emerging based on manganese, iron and other common transition metals both for water oxidation and fuel formation. 8,9

However, the goal should not be to chemically mimic every component of living systems.10 The challenge is to use these systems as inspiration for new technologies with properties and capabilities rivaling those of their natural counterparts.11–13 For example, the efficiency of initial light capture and charge separation steps in natural photosynthesis is near unity; but losses related to further metabolism and the use of intermediate energy carriers reduce the overall energy conversion efficiency to less than a few percent. 14,15 In principle, artificial systems could bypass such constraints by having fewer energy transduction steps. 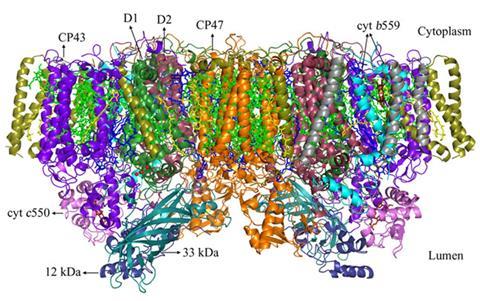 Photosystem II captures light to use in water splitting

Thus, artificial photosynthesis (AP) has the potential to provide a solution to energy demands, but in pursuing such ideas, we must be cautious. Many components currently proposed for use in AP are expensive, inefficient or non-durable. Some are even based on rare and/or toxic compounds. Clearly this is unsatisfactory for large-scale deployment – we must be careful to avoid systems that spread toxic materials that are as, or more, polluting than the burning of fossil fuels. Again, we can learn much from biology – in particular, strategies for using abundant, easily accessible, and environmentally benign materials.

Coordinated efforts (fundamental science, engineering, funding) will be required to move this research forward. But if the scientific and engineering challenges facing AP can be surmounted, technological innovation still has limits. Energy issues are complex, and tightly coupled to policy and human behavior so social and political obstacles must also be overcome.  Despite drastic increases in the energy efficiency of modern appliances and devices, societies continue to demand more and cheaper energy to satisfy not only a population’s needs, such as food production, but also to power the increasing number of commercial products – an economic concept referred to as Jevon’s paradox. A related proposition is that developed countries will only implement carbon-neutral technologies as and when their old carbon-intensive systems are pawned off and adopted by developing ones. In principle, clean energy solutions might have the largest impact in emerging, pre-industrialised nations. ‘Cap-and-trade’ systems could incentivise a reduction of net carbon emission and help accelerate discovery of new technologies. Incentives to promote broad and rapid adoption of energy carriers (electricity, batteries, hydrogen), however, could inadvertently increase, rather than reduce, net carbon emissions, if there is no infrastructure to scale up renewable sources. The integrated approach to capture, convert and store, as offered by AP, may avoid such issues.

Despite the challenges, we imagine a future where a substantial portion of our energy is met by solar fuels, leaving the task of food production to natural photosynthesis. This comes with the important caveat that plants, algae and cyanobacteria be used to produce high value carbon compounds (for example, biopharmaceuticals) as well as biofuels, where there is no competition with food production. Science has made this scenario a possibility, but to make it a reality the insights of research must be supported by the incentives of economics and the political will of countries across the globe.