Rules of thumb play a key role in chemical knowledge. Even though they often lack a rigorous definition, accepted concepts have proven useful for shedding light into chemical phenomena and, more importantly, achieving true predictions. There is, however, a concept of utmost relevance to chemistry which is flawed precisely because of its lack of a well-established definition: the oxidation state. 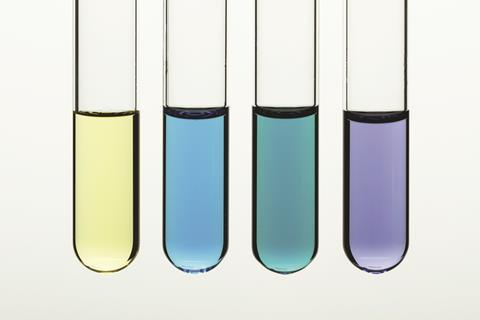 Vanadium can exist in four oxidation states. But sometimes working out the rules isn’t that simple…

For years, the International Union of Pure and Applied Chemistry’s (Iupac’s) Gold Book described a set of ‘agreed upon’ rules for assigning oxidation states, but no formal definition was given. Last year, following Iupac’s recommendations of a task group led by Pavel Karen from the University of Oslo, Norway, oxidation states were given a refined generic definition: ‘the atom’s charge after ionic approximation of its heteronuclear bonds’.1 Bonds between atoms of the same element are always divided equally. This was accompanied with practical algorithms applicable to molecules and solids.

The starting point of the Iupac algorithm of assigning bonds is the Lewis structure of the molecule. Using Allen’s scale of electronegativity, electron pairs between two bonded atoms are then assigned to the more electronegative one. Such a simple recipe works pretty well in most cases, yielding oxidation states in agreement with so-called chemical intuition. But, as with any general rule, there are some interesting exceptions that can cause problems.

Adducts are a special case of compounds when it comes to assigning an oxidation state. The molecular system is formed by distinct units, which often form the adduct by direct addition. In the case of Lewis adducts, a dative bond is formed between the contact atoms of the Lewis acid and base.

In most cases, such as in H3N→BH3, the contact atom of the Lewis base (NH3) is more electronegative than that of the Lewis acid (BH3), and straight application of the Iupac algorithm appropriately assigns the electrons of the dative bond to the former.

However, when the contact atom of the Lewis acid is more electronegative than that of the Lewis base, an exception to the rule must be invoked. Moreover, one can even imagine a situation with both the Lewis acid and Lewis base having the same contact atom (as in H4C2N2P←PC4H4), forming a homonuclear dative bond. In that case, one is forced to apply yet another exception to the fundamental ‘electrons of homonuclear bonds are shared out’ rule, and assign the electron pair to the Lewis base.

These exceptions occur because, in the Iupac rule, the burden is placed solely on the nature of the contact atoms in the adduct. But the character of a Lewis acid–base is determined by the whole chemical environment; in the case of NH3, by fulfilling the octet rule.

There are other complications. In the case of pi-adducts of transition metals, where there is no formal atom-to-atom bond between the metal and the pi-ligand, the driving force that determines the oxidation state of the metal is the aromaticity of the ligand. Thus, in the case of ferrocene, formal anionic cyclopentadienyl (1–) moieties are assumed in order to fulfill Hückel’s rule (the molecule must have 4n+2 electrons in a conjugated system of p orbitals), leading to a Fe2+ species. Following the same rationale, benzene-like ligands are seen as neutral. Special care must be taken, though, with the local electronic structure of the pi-ligands: in their triplet state, 4n Baird’s rule applies instead and the electron-count patterns for aromaticity are reversed!

Transition metal carbenes challenge another implicit rule. In these type of systems, a carbene unit usually exhibits a double bond with the metal centre. They are classified according to their reactivity as Fischer or Schrock carbenes. Following Iupac’s rule, the carbene fragment in Schrock carbenes is readily considered ionic, in line with its nucleophilic character. Carbon is more electronegative than the transition metal and the carbene moiety keeps all four electrons involved on the double bond, reaching a charge of (–2). On the contrary, in Fisher carbenes, the carbene fragment is formally neutral. One way to reach this oxidation state is to consider the sigma bond polarised towards the carbene and the pi bond polarised towards the metal, which keeps the pi electrons. However, this textbook view cannot be reconciled with Iupac’s rule that all electrons of the bonds between two atoms are assigned to the one that is most electronegative.

Perhaps the solution is computational chemistry. The crucial chemical environment effects are already accounted for in the wavefunction, and there are tools that properly account for the electron distribution around atoms. One of the simplest descriptors is the so-called partial atomic charge that accounts for the average number of electrons assigned to the atom. Unfortunately, the fact that oxidation numbers are written as a charge (albeit an imaginary one) has contributed to the misbelief that partial atomic charges represent a sort of non-integer version of oxidation states.

Recently, it has been shown that by treating each electron individually, computational chemistry tools are able to calculate oxidation states from first principles,2 and overcome the intrinsic limitations of ionic approximation.

However, until these tools are more widely available, a better empirical approach to oxidation state assignation could start by identifying  subsystems of enhanced stability in the molecular system in the first place, according to known rules and principles such as the aromaticity and the well-known octet or 18-electron rules of Langmuir.

It’s just worth remembering that, in science, even the best rules often have exceptions.