As it stands, there is no credible model of a Brexit agreement which does not weaken the competitiveness of the UK chemical industry

As 2018 begins, the first phase of the UK’s Brexit negotiations have just come to an end. Like it or not, we are just over a year away from the March 2019 deadline that will see the country leave the European Union – and exactly what that means remains uncertain.

Most debate of post-Brexit trade relationships ignores the complex and sophisticated nature of modern industrial value chains. Many manufacturing schemes involve intermediate products and components being made in a succession of different countries, and the import of goods for additional processing and subsequent re-export is common. In such a manufacturing model, the costs and risks of incremental trade barriers are compounded.

Unfortunately, this is exactly where the UK chemicals sector sits. It is estimated to import around two-thirds of its intermediates from the EU and also feedstock from the sophisticated chemical infrastructures of mainland Europe. This dependency creates an uncertain future in the post-Brexit world.

The risks to trade can be broadly placed into two groups. First, there are tariff barriers. These will vary by product type, but the UK Chemical Industries Association estimates that tariffs on chemicals could be as high as 6.5%. While this might sound relatively modest, it would be an incremental cost and put UK goods at a competitive disadvantage. 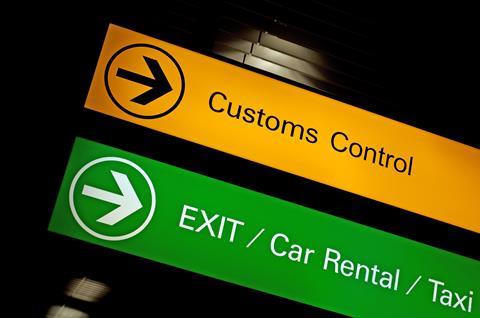 The second group is the non-tariff barriers: structural issues related to the highly regulated nature of the industry and its products. For example, UK chemical companies would lose the right to self-certificate when exporting to the EU. Instead, a company would be required to substantiate quality, possibly on a shipment-by-shipment basis or possibly at the time and port of entry to the EU. There is a very real risk of significant, unpredictable delays – an unacceptable situation in a world where customers often strive to maintain inventories at very low levels.

The scale of traffic to which such customs processes would need to be applied incrementally is truly staggering. In 2015, 2.6 million lorries used the Port of Dover, while 1.6 million used the Channel Tunnel. For both ports, trade with the EU is estimated to have been at least 75% of the total lorry flow.

In becoming a third-party country, the UK will also lose rights to access the accelerated ‘smart’ information-sharing systems which are only available to EU member countries. What had previously been a competitive advantage for the UK relative to non-EU competitors would become a disadvantage when competing with the EU’s very strong chemical competitors. And it goes without saying that becoming detached from Reach would pose particular issues.

But ‘no deal’ is the true nightmare scenario for chemicals companies. In my view, the scale of exposure of the UK chemical industry to EU customers and suppliers means the sudden imposition of the tariff and non-tariff barriers above would be catastrophic. Customers simply will not rely on suppliers whose delivery schedules are subject to the whims of the customs processes when more reliable alternatives are available.

It is an inescapable conclusion that, as it stands, there is no credible model of a Brexit agreement that does not weaken the competitiveness of the UK chemical industry. The risk clearly varies across the segments of the industry, but it is difficult to envisage any compensatory positives to set against the list of negative factors for the industry as a whole. Perhaps the UK government will strike the deal of the century as the countdown ticks down to the UK’s departure next March, and a crisis will be averted. But at the time of writing it appears no one appreciates the gravity of the situation facing the country’s chemical industry – or has an answer to mitigate the shock that awaits it.

Paul Satchell is the honorary treasurer for the Royal Society of Chemistry. He worked in the chemical industry for 16 years before spending 21 years as an equity analyst for a number of investment banks