The criteria for discovering a new element

Why the rules are changing in the search for superheavies

The hunt for new elements is one of the most exciting frontiers of science, and the attempts to create new atomic nuclei are closely followed around the world. With no gaps in our current periodic table, the days of discovering an element in nature are probably over. Instead, isotopes of new elements are created in laboratories by nuclear fusion and typically have very short half-lives, which makes identification and verification difficult.

Of course, all claims to have discovered a new element need proof before they are accepted by the scientific community and ‘priority’ – the right to be recognised as an element’s discoverer – is decided. Now a group of experts from around the world have reviewed how such claims can be confirmed, which is likely to decide the criteria of element discovery as we push into the eighth row of the periodic table. 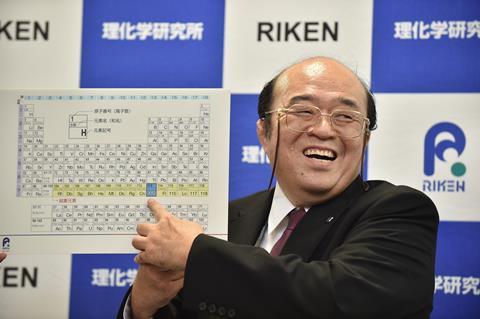 Kosuke Morita was the lead discoverer of element 113, nihonium, at Riken in Japan

The need for this review is tied into the often contentious history of element discovery. Between 1955 and 1984, contradictory results – all claiming the discovery of new elements with atomic numbers 101 to 109 – were published in the scientific literature, mostly from teams at Lawrence Berkeley National Laboratory (LBNL), US and the Joint Institute for Nuclear Research (JINR), Russia. After 1976, experiments were also conducted at the newly founded research laboratory GSI in Darmstadt, Germany. As these elements come after fermium, element 100, the debate surrounding the claims is sometimes known as the ‘transfermium wars’.

In order to dissolve the uncertainties, the ‘Transfermium Working Group’ (TWG) was set up by the International Unions of Pure and Applied Chemistry (Iupac) and Physics (Iupap). The outcome was a compilation of criteria, published in 1991, which need to be fulfilled so that priority of discovery of a new element could be assigned.1

After a number of consultations and letters exchanged between Iupac, Iupap and the laboratories, the priority of the discoveries and the final names and symbols of elements 101–109 were agreed in 1997.2 To date, the elements up to 118, oganesson, have been confirmed using the 1991 criteria.

These criteria need to be refreshed. In the past 20 years, research on superheavy nuclei and elements has seen remarkable growth. Intensive beams of rare but stable isotopes, the use of neutron-rich radioactive actinide targets and the development of highly sensitive detection methods were all difficult to envisage at the time when the criteria were created. Not all of the TWG criteria take into account specific advantages – or any problems and difficulties –adherent to the production and identification methods in use now.

To address this problem, Iupac and Iupap established a new Joint Working Group (JWG) at the beginning of 2017 tasked to review the 1991 criteria in the light of the experimental and theoretical advances in heavy element research. The group comprised members from five laboratories that have discovered an element – JINR, GSI, LBNL as well as Oak Ridge National Laboratory, US and Riken, Japan – and one member from Lund University, Sweden. The group’s decisions were published in 2018.3

The group found that, in general, the nature of the data is such that an absolutely secure identification in a first discovery experiment – its ‘discovery profile’ – is rarely possible when new regions in the chart of nuclei are explored. This proved to be the case with the discovery of spherical superheavy nuclei – elements 114 to 118 – from 1999 to 2010. However, combining the information from various irradiations and measurements, new elements can be safely and quickly identified.

There is also another way to provide evidence of a new element. As superheavy nuclei are unstable, they will radioactively decay, losing an alpha particle (the equivalent of a helium-4 nucleus) to become lighter ‘daughter’ elements. If the produced isotope decays into a known isotope through traceable radioactive decay chains – or using known reactions (such as fusion evaporation reactions) and established identification methods – only one measured decay chain could be sufficient to confirm a discovery has been made.

The JWG report included information meant as guidelines for experimentalists and members of future joint working parties. This included discussion of various identification methods, and the experimental problems that can arise and hamper the interpretation of the measurements. It also considered the physical properties of nuclei produced in the reaction, and the properties of the nuclear decays.

That said, discovering a new element should not be down to a checklist, where the number of filled or failed criteria decides if a threshold is satisfied. Instead, the JWG feels that, for each criterion, its weight and applicability to a certain experimental result has to be considered carefully on a case-by-case basis.

There is no doubt that the search for new elements, and the continued study of the properties of isotopes already discovered, will reveal exciting new results. As the original TWG report states, this will extend ‘our insight into the details of the construction of Nature’s most complex nuclear, atomic, and chemical edifices and the laws that govern their construction’.