The critical role of chemistry in D&D poisons

Not everything in Dungeons and Dragons is fantasy 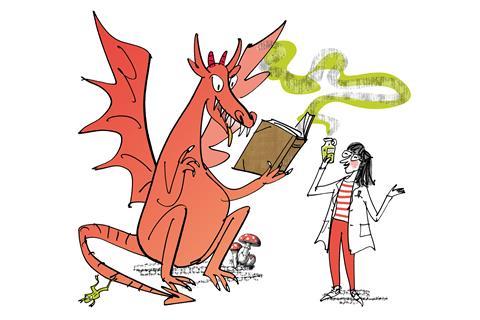 Every couple of weeks, I gather with friends to explore ancient ruins, collect artifacts, and occasionally fight off a mind-controlling tentacle monster terrorising a group of children. In other words, to play Dungeons and Dragons (D&D).

Aside from all being the sort of nerds who like rolling dice and pretending to fight monsters with magic, we’re also all chemistry nerds – which means it’s not unusual for an in-game situation to spark a science discussion. Recent encounters with a swarm of small, venomous flying reptiles and a statue-like monster with immunity to poison damage got me wondering how poison works in D&D, chemically speaking.

Although it’s true that ‘the dose makes the poison’ since any substance can cause harm if there’s enough in your system to overwhelm your body’s normal operations, there’s nothing in the D&D rulebooks reflecting dose effects. That’s probably for the best; the rules are complicated enough already.

Between the D&D player’s handbook and the dungeon master (DM) guide, there are 15 named poisons, from the realistic sounding (essence of ether) to the fantastical (midnight tears). There are also many venomous creatures in the monster manual and a handful of poison-related spells.

The effects of D&D poisons are determined, as most things are in the game, by a dice roll – referred to as a ‘con save’ because the character’s constitution score impacts what happens. Each poison has a difficulty class, which sets the bar for how high a player needs to roll to avoid its worst effects. Basically, difficulty class approximates how likely a poison is to cause harm, and constitution reflects how well the character can resist it.

Damage from poison is accounted for by taking points from your character’s health score and usually invoking a ‘poisoned condition’, which imposes a disadvantage on dice rolls for certain actions to approximate the character being in a weakened state. There may also be other effects like paralysis (crawler mucus) or blindness (malice), which makes role-playing more interesting – and offers clues about the poisons’ chemistry and toxicology.

In-game poisoning wears off with time or after a number of successful con saves as the poison is flushed from the character’s system and their body recovers from the damage. As in real life, access to an antidote helps a poisoned character recover. Unlike real life, in which treatment depends on what biological systems are affected and how, the same antitoxin works for nearly every D&D poison. I picture it as a magic version of activated charcoal that binds toxins to prevent them from being absorbed by the body – and saves adventurers from having to carry dozens of specific antidotes or find a fully stocked hospital in an abandoned wasteland.

When I saw this entry in the Player’s Handbook on a list of common adventuring supplies, my first thought was ‘I wonder if it’s basic in terms of pH?’

When I saw an entry for ‘basic poison’ in the Player’s Handbook on a list of common adventuring supplies, my first thought was ‘I wonder if it’s basic in terms of pH?’

Basic poison’s intended use is for adding a little extra punch to weapons. So, in my search for answers I turned to a list of real-life arrow poisons – historically used to coat weapons for hunting or warfare. Many plant-derived arrow poisons are alkaloids, a broad class of organic natural products containing weakly basic nitrogen heterocycles. Plant alkaloids in arrow poisons include curarine, toxiferine and strychnine. Curarine and its derivatives contain quaternary amines that block acetylcholine receptors, causing paralysis and death by asphyxiation if the dose is high enough.

There are also animal-based arrow poisons, such as the batrachotoxin secreted by poison dart frogs – one of the most potent alkaloids in nature. It works by binding sodium ion channels and forcing them open, causing paralysis and death by respiratory paralysis or cardiac arrest.

Basic poison isn’t especially potent (it deals only up to four extra damage points and the DC is low), and notably doesn’t cause paralysis or invoke the poisoned condition in-game. I envision the active component as a plant-based alkaloid, just potent enough to cause slight weakness and numbness on top of the arrow or knife wound. So yes – basic poison is possibly (slightly) alkaline.

Some people have done the opposite of what I did here, translating the properties of real-world poisons like death cap mushrooms into playable game content (which I’d like to request that my DM, if she’s reading this, not use on me).

Either way, gaining a deeper understanding of how real-world science relates to the game mechanics has considerable potential to make D&D roleplay richer and more fun!

Now, where did I put my poisoned daggers?