I work with tellurium. It is an interesting element: touch it or breathe it in and you will start to smell of garlic. This unusual property led me to investigate further. Tellurium is very rare and was discovered in 1782 in what was then Transylvania. The only element to be discovered in Transylvania and exposure makes the victim reek of garlic – I can’t help but think there is a marvellous vampire story in this somewhere. 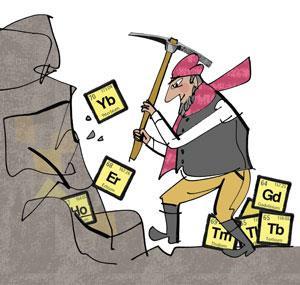 My investigations  also led me to uncover a few mistakes. In the largest periodic table at the University of Glasgow has you will find the symbol Te twice (but no Tc). Then I discovered a periodic table online attributing tellurium’s discovery to Germany. I started checking where a few of the other elements were discovered and found things can be a little muddled. Gadolinium, for example: some say France, others say Switzerland. Nobelium: US or Russia? I set about making my own periodic table, assigning countries to the elements based where the work was funded or carried out (not on nationality of researchers, sorry polonium). You can see it at http://www.jamiebgall.co.uk/.

There were a few surprising facts along the way, one being that there are only a few countries dominating the table. The gold medal for element discovery goes to the United Kingdom which has uncovered an impressive 23 of them. This is with no small thanks to The Royal Institution, which claims credit for eight of these, with Humphry Davy the driving force behind most.

Hats off to Sweden, which takes the silver medal jointly with Germany. It may seem surprising that this country has a claim to 19 elements but Sweden had a secret weapon in the elemental treasure hunt – Ytterby.

Off the east coast of Sweden lies a small island with a little village named ‘outer village’ or Ytterby. In the 1700s a new mineral was discovered here and it was named ytterbite after the village. Analysis of this mineral over the following decades revealed the new elements yttrium, erbium, terbium and ytterbium, four of Sweden’s victories. More were to follow from the same quarry: holmium, thulium and gadolinium, all of which have Scandinavian based names. In fact, if you read aloud the periodic table in English there is a fair chance that when you reach one that it is difficult to get your tongue around it it has a Swedish connection.

In recent times, the US and Russia have ruled the bottom of the table. The Lawrence Berkeley National Laboratory in California almost single handedly filled the actinides and the Joint Institute for Nuclear Research (JINR) in Dubna, has racked up eight elements in collaboration with groups in the US. The JINR make the elements  artificially by colliding nucleii together and many are only able to exist for a matter of seconds. Some of these survive for such a short period of time that they are difficult to isolate and prove the existence of. The International Union of Physical and Applied Chemistry is yet to confirm the existance of four of the elements before they can adopt their official names and take their places on the periodic table.

When, or if, elements 113, 115, 117 and 118 are confirmed and the victory given to the JINR and its US collaborators at the JINR, we will see a change to the discovery league table. The US, gaining 4 more discoveries, will leap ahead of both Germany and Sweden to second place with 21. With that the table (in all probability) will be complete leaving the UK as the gold medal winners in the discovery of the elements forever.