The island that we’ve eaten

How the need for fertiliser consumed Banaba 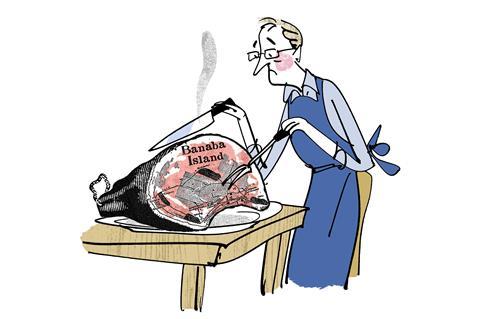 Twenty thousand men died on the battlefield at Waterloo, and most were buried close to where they fell. Their bodies were piled into mass graves; hastily covered with a layer of earth before the June heat made the task any more unbearable than it already was. But in the 200 years that have since passed, archaeologists have recovered only a single skeleton from this patch of Belgian ground. The rest of the remains have gone. There is no mystery, though; we know where they went. They were taken to England; ground to a fine powder; distributed to farmers and spread across their fields. There was something, those farmers knew, that was missing from their soil. And that something could be replenished with a sprinkling of bone dust.

Found in every living cell, phosphorus is essential for almost every one of life’s biochemical processes. It is found in the phospholipid bilayers that give cells their structure; it is the P in the ATP that powers life’s chemical reactions, and it is part of the nucleic acids that pass that life from one generation to the next. For such an important element though, it is surprisingly scarce in the environment: it is the least abundant of all elements, relative to the amount required for life. And unlike the other elements found in DNA, ATP and phospholipids – carbon, hydrogen, nitrogen and oxygen – it does not circulate in the environment. Once it has been removed from a location, it is gone. A single crop of wheat can remove 7kg of phosphorus from a hectare of land. With an adult human skeleton containing approximately 700g of phosphorus, and without even considering the ethics, dead bodies could never provide farmers with a reliable, long-term supply.

One degree south of the equator in the central Pacific Ocean, though, an island only six miles in circumference, hundreds of miles from the tiny islands that are its nearest neighbours and 10 days’ sailing from the ports of Australia, offered a solution. When Australian prospector Albert Ellis arrived at Banaba in May 1900, he found an island of 450 inhabitants, dotted with coconut palms and bright green foliage, ringed with a rampart of limestone cliffs and encircled by a reef awash with breaking surf. And he found phosphorus. Alongside the island’s limestone were deep deposits of grey-brown rock rich in phosphate. Deposits that had formed as sediment on the ocean floor, that had been thrust above the waves, and that were larger and more concentrated than any Ellis had ever seen before.

Within three months, the first phosphate had been exported from the island, and such was the need of the world’s farmers that this isolated speck of earth was transformed. Hundreds of imported labourers hacked at great deposits of phosphate rock and trains hauled carts from quarries to the water’s edge, while steamers offshore awaited their cargo. Over 80 years, two mining companies – the Pacific Phosphate Company and the British Phosphate Commission – pulled Banaba apart. They exported the fabric of the island, funnelling it through soils, plants and grazing animals into the global food chain. They exported 22 million tonnes of land before the phosphate was exhausted, stripping 92% of the island’s surface, and removing the entire indigenous population when there was nowhere left for them to grow food. They left behind an uninhabited industrial wasteland, littered with mining debris and abandoned machinery.

Phosphate rock, mined elsewhere, remains the world’s primary source of phosphorus. But it will not last forever. The natural phosphorus cycle occurs on geological timescales, and if humans want to retain access to this element – and modern agriculture dictates that we must – then we will need a new, anthropogenic cycle. We will need a circular economy in which waste phosphorus is recovered, recycled and reused. The biggest stream of phosphorus waste is sewage, and water treatment plants already employ chemical and biological processes to remove phosphorus, but those processes typically result in phosphorus compounds that cannot easily be reused: emphasis will need to shift towards recovering phosphorus in bioavailable forms. And with byproducts from the animal industry, including bone meal, forming another major source of phosphorus waste, we will also need to learn from the skeleton recycling circular economy of the 19th century .

There are things, too, that we must learn from Banaba. It is today one of the 33 islands that comprise the nation of Kiribati. With a maximum elevation of 87m, it is the only one that rises more than a few metres above sea level. Climate change models suggest that, in time, Banaba may be the only part of the country that remains above the waves. It will be a permanent monument to rapacious extraction; a nation’s tombstone declaiming the need for sustainable practices.