This year marks the bicentenary of Charles Darwin's birth and the sesquicentenary of his On the Origin of Species, one of the most important and influential books ever published.

This year marks the bicentenary of Charles Darwin’s birth and the sesquicentenary of his On the Origin of Species, one of the most important and influential books ever published. Darwin was not strictly a chemist, but chemistry entered his life in several ways. In his 1876 autobiography he wrote of his schooldays: ’my brother worked hard at chemistry, and made a laboratory with proper apparatus in the tool-house.I was allowed to aid him.we often used to go on working till late at night’. Darwin added that he was deeply interested in chemistry and at school was nick-named ’Gas’ Darwin. When he studied medicine at Edinburgh he was very impressed with the entertaining chemistry lectures of Thomas Hope (Joseph Black’s successor and the discoverer of strontium). 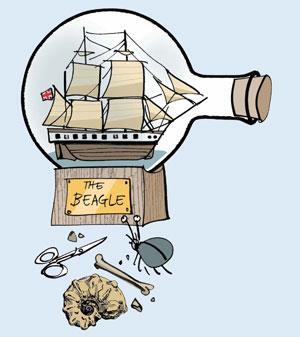 His journey from 1831-1836 on the Beagle  would not have occurred without the help of his uncle, Josiah Wedgwood II or ’Jos’, son of the famous potter and distinguished chemist Josiah Wedgwood. Jos followed in his father’s footsteps and became a close friend of Darwin’s father Robert; when Robert opposed his son’s plans to join the expedition it was Jos who persuaded him that it would do Charles the world of good. During his Beagle journey and subsequently, Darwin developed his theory of evolution and the principles of natural selection, but wrote little on the subject before 1859. It was Alfred Wallace’s paper of 1858 on evolutionary matters that finally galvanised Darwin into writing The Origin.

On 24 November 1859 the book was published: the print run sold out that day and a second edition was rushed out; in all there were six editions. It caused a sensation, but here we are concerned with one aspect only. On page 287 of the first edition Darwin wrote, concerning the Kentish Weald, ’the denudation of the Weald must have required 306,662,400 years, or say three hundred million years’, based on erosional calculations (Darwin was fond of ’exact’ figures, once calculating that there were 53,767 worms per acre of English countryside). His controversial comment on the Weald was one of the first semi-quantitative references to the antiquity of the Earth; he omitted this phrase, and indeed all material on the Weald, from the third and later editions of The Origin.

On the assumption that the Earth had gradually cooled from molten rock, the formidable Lord Kelvin calculated it to be between 20 and 400 million years old; in 1895 he reduced this to 20-40 million years. Kelvin was deeply critical of Darwin’s Weald estimate - if that were correct the Earth must be much older than 300 million years; likewise Darwin was much troubled by Kelvin’s very low estimates. Chemistry impinged again in the resolution of this dispute, albeit some 25 years after Darwin’s death. Ernest Rutherford realised in 1904 that the internal heat of the Earth was driven by radioactivity; from the content and half-lives of radio-elements in minerals such as pitchblende he calculated in 1907 that such ores must be 0.5-1 billion years old, revising this in 1929 to 3.4 billion years. The currently accepted figure is 4.57 ? 0.07 billion years.

Chemists were also influential in formulating Darwin’s ideas. In his immense correspondence of over 6,000 letters  he refers to over 100 chemists, and correspondents include Hofmann, Brodie, Herschel, Kolbe and Meldola. He collaborated fruitfully with chemists, particularly Sir Edward Frankland (professor at the Royal College of Chemistry from 1865) who sent him chemicals for experiments at Down House and analysed pepsin and acid secretions from the carnivorous sundew plant Drosera  for him.

So, while Darwin was not a chemist himself, he owed much to the field, which always excited him. His crucial Beagle  journey would not have occurred without Jos’s intervention; he worked with a number of chemists, and his views on the antiquity of the Earth were to be vindicated by a chemist.