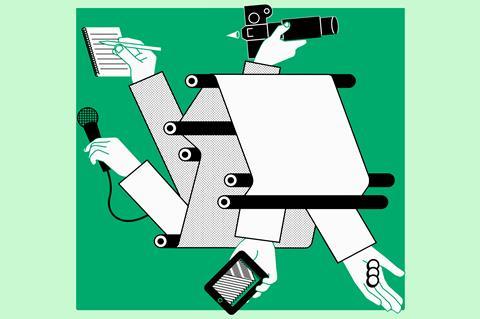 Hot off the press: hype’s not all bad

Headlines so often run ahead of reality. From gene therapy and room temperature superconductors to artificial intelligence and stem cell research, it can take decades for a ‘breakthrough’ to have a real impact on everyday life. That is, of course, for those rare examples that have any long-term influence at all.

Whether excessive optimism, puffery or propaganda, the tendency to hype science has triggered meditations on the role of the media along with broader concerns about the link between faddish, overheated fields of research and pathological science, fraud and the replication crisis.

The Covid-19 pandemic has seen its fair share of hype, not least a former president’s misplaced faith in the powers of hydroxychloroquine as a ‘game changer.’ But hype itself has value.

It’s understandable that hype is a pejorative term in science. Hype diverts funding into specific areas where everyone then gathers, and that produces mediocrity and starves other science of resources. This can also produce backlashes against fields that could have been better served without the hype cycle. Hype can harm science’s reputation, particularly when it exaggerates claims or amplifies fears – the latter most notably when it comes to unfounded concerns about vaccines or genetic modification technology.

While hype generally gets a bad press with scientists, it has its uses. Decades ago, when I was bouncing neutrons off soap bubbles, those scientists who did succeed in attracting the public gaze were looked down on by their peers, who dismissed them as attention seekers who sought to exaggerate and simplify science while focusing the story away from their work and onto themselves. Today, there is greater acceptance that scientists need sharp, hyperbolic elbows to get the attention of the media.

Screaming tabloid splashes have done more to air moral and ethical issues raised by controversial science than any ethicist, think-tank or government report. Hype offers a remarkably powerful way to move the conversation about science beyond the research bubble to get a broad sector of the public animated about the details of nuclear transfer, chimeras, genetic modification, growing embryos and in vitro fertilisation.

Hype can also bring past achievements into sharper relief. Historians sigh, groan and roll their eyes at any mention of Eureka moments because the reality is always more complicated. But people love stories about other people and, though imperfect, unfair and simplistic, heroic narratives are, once again, a brilliant way to engage big audiences.

By drawing a large amount of attention to an area, hype can also attract closer scrutiny to a field. Given the billions of pounds of taxpayers’ money that go into research it is entirely reasonable for journalists to grill scientists about the long-term impact of their work: if this breakthrough lives up to expectations, what will it mean for my readers in X years?

When X is less than three, we can be reasonably confident there is something to the headline. However, the further beyond a three-year horizon that claims go, the harder it is to draw the line between a realistic projection, unrealistic hope, even science fiction.

When it comes to Covid-19, the coverage has been relatively hype-free – developments have come so thick and fast that the focus has been on the here and now, not long-term speculation. Yet we could have done with a lot more hype about the risk of a pandemic before Sars-CoV-2 was identified in Wuhan.

Dreams of the future

Let’s not hype hype. Nobody would deny that we need to focus on the quality of research, not the width of the headlines that it generates. The ultimate desire is to promote science that really will make a difference over the long term, and to communicate it in a responsible manner.

But we should also be pragmatic. Doing away with hype is about as easy as putting an end to dreams or extinguishing the human imagination. The pattern-seeking propensity of the human brain is irresistibly drawn to bold attention-grabbing narratives, and that makes hype a powerful force for engaging with broad and diverse audiences. After all, everyone wants to know what happens next: not just the public but governments, funders and businesses too.

Here I must confess to have written my fair share of torrid prose. As a Fleet Street science editor, I saw first-hand how it can take decades for that front-page splash about medical science to trickle into the clinic, if it ever got there at all. I have also seen how hype can demonise an entire technology.

However, decades of writing about triumphant breakthroughs have convinced me that hype is useful. In its shouty, overblown and exaggerated way, hype provides advanced warning about where that great adventure we call science is taking us.