Playing among the clouds

In summertime, there are few sounds more inviting than the gentle ‘psshtt’ as a bottle of some fizzy beverage is opened. But before you pour, stop and peer into the neck of the bottle – suspended for a few seconds is an opalescent cloud resulting from the sharp drop in temperature caused by the expansion of the gas above the liquid. It is a reminder of the work of Charles Wilson, a pioneer of atmospheric science. 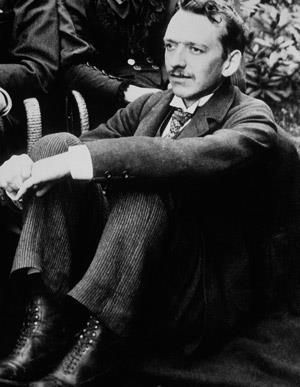 Charles Wilson. Scottish physicist and meteorologist (1869â€“1959). Invented a particle detector based on an apparatus

Wilson was born into a farming family in Scotland’s Pentland Hills. His father died when Wilson was only four and his mother, with three children and four step-children, moved to her parents’ home in Manchester. Wilson’s two eldest half-brothers soon embarked on careers that supported the family and allowed Charles and his younger brother George to study.

Wilson attended Owens College in Manchester and then won a scholarship to Cambridge where he soon settled on physics and chemistry, graduating in 1892. To make ends meet, he worked as a demonstrator and private tutor, eventually moving to Bradford to teach at a boys’ school. He enjoyed the work, but he was frustrated not to be able to do research.

So Wilson returned to Cambridge, where he demonstrated to medical students – it paid barely enough to survive, but gave him the opportunity to work in the Cavendish laboratory, which was led by the inspirational J J Thomson.

While Wilson cast around for a project, he spent time on Ben Nevis in the summer of 1894. The experience would change his life: on the summit he saw a succession of optical displays – multi-coloured coronas around the sun and glories projected into the mist. He had found his problem: to replicate these phenomena in the lab.

He was not the first to try to make clouds in the lab. In 1875, Paul-Jean Coulier, professor of applied chemistry and hygiene at the Val de Grace military medical school in France, had shown how to make a fog in moist air. He used a rubber bulb to compress the air contained in a large glass flask; when the bulb was released a fog was formed. But the fog was ‘capricious’ and failed after a few repetitions. If ‘fresh’ air was introduced into the flask, the fog returned, but if the air was filtered with a cotton wool plug, the fog failed. Coulier concluded that water droplets only formed on dust particles in the air – tobacco smoke was an excellent source – but took the work no further.

In 1880, John Aitken in Edinburgh rediscovered the effect, and made better estimates of the number and size of these nuclei, as he called them. Aitken’s paper brought this subtle mechanism for cloud formation to the metereological world’s attention.

Wilson designed a new cloud-forming apparatus: an upturned beaker was placed inside a bottle filled with water to trap a specific volume of air; the bottle was connected via a pair of valves to a second, evacuated bottle. Opening the valves caused a sudden drop in pressure, and the rapid expansion of the trapped gas led to the appearance of a cloud. By repeating the expansion over and over he could eventually free the gas of Aitken nuclei and fog only formed when the degree of moisture saturation exceeded a value of 1.252, a precision that speaks volumes of Wilson’s meticulous work.

In succeeding years, he scaled down his apparatus to allow ever faster expansions; depending on the expansion ratio, the fogs displayed diffraction rings of different colours. Experiments with different gases followed. His work required exceptionally careful and complex glassblowing and his kit would often break. The gentle and reserved Wilson might be heard to mutter, ‘dear, dear’, and then start all over again. 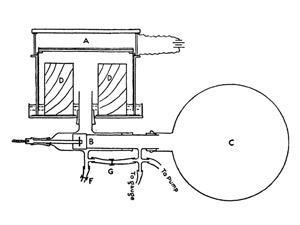 To probe the origin of his ‘1.252’ condensation limit, Wilson shone x-rays into the chamber and found that fogs formed only during or just after irradiation, suggesting that free ions in the air were responsible for condensation. Over the next few years, he meticulously documented the role of ions in the air, eventually showing the conditions under which rain-like condensation occurred in his chamber.

A hair-raising experience on Ben Nevis in a thunderstorm diverted him to explore the origins of electrical charging in clouds, but in 1910 the excitement over radioactivity brought him back to condensation. Wilson asked himself whether ions produced by Ernest Rutherford’s speeding a and b particles might cause water droplets to condense. He redesigned his cloud maker with a much wider expansion chamber, 7.5cm in diameter with a glass window lightly coated in gelatine, in part to stop the window fogging up, but also to allow electric fields to be applied. The chamber’s floor could be dropped rapidly to cause the expansion. The apparatus worked beautifully · streaks of condensation shot through the chamber, revealing the course of the charged particles.

Wilson’s chamber, and his series of breathtaking photographs, made radioactivity visible to everyone. But it also ushered in much more sophisticated ways to study the atmosphere.

Today the impact of aerosols is a crucial known unknown of atmospheric science, while a detailed mechanism of cloud charging remains elusive. Let us hope we have not yet seen the last of the cloud gazers.