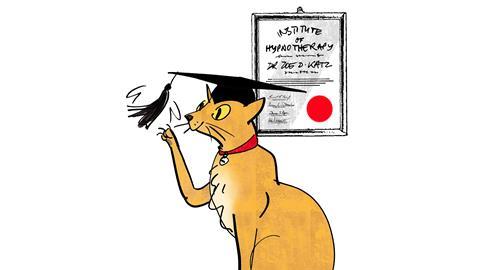 Of good dogs and bad journals

If I were looking for a psychotherapist, I would probably start off by checking their credentials. Do they have the necessary qualifications, and are they accredited by a professional organisation? Dr Zoe D Katze certainly ticks all of these boxes: she is an accredited hypnotherapist and certified by US hypnotherapy associations. She sounds like someone I could trust.

The only problem is that Zoe is a cat.

While I admit that staring into a cat’s eyes is somehow hypnotic (at least until it decides to scratch your face off), I’m not sure if this is enough to be called a professional therapist. Zoe’s owner, psychologist Steve Eichel agrees. Unsatisfied with licensing for mental health professionals and doubting the value of certification in the field, he showed how simple it is even for a cat to be accredited by professional organisations. All that it took was to fill out the first hypnosis association’s web application and pay a fee. After they (apparently) reviewed Zoe’s background and experience, the certificate arrived. This got the ball rolling – organisations often recognise each other’s accreditation – and soon Zoe was the proud owner of three impressive-looking diplomas.

In 2009, BBC presenter Chris Jackson repeated Eichel’s 2002 con and got his cat George accredited by three UK hypnotherapy organisations. When Jackson made the investigation public, some associations admitted and corrected the mistake. But they didn’t seem to feel obliged to improve their certification procedure.

In the case of Trinity Southern University, US, letting the cat out of the bag had much more severe consequences. Until 2005, the Texas-based distance learning university offered degrees at budget prices. Master’s degrees in applied science and technology went for a mere $349 (£266); PhD programmes for mathematics or psychology were only $499. And for just a few hundred dollars, Trinity Southern gave a master’s of business administration to Colby Nolan, a six-year-old cat belonging to a deputy attorney general.

Investigators suspected the university to be a diploma mill, offering bogus academic degrees for a fee, but they needed proof. They applied for Colby to receive a bachelor’s in business administration – priced at $299 – citing previous experience in retail and babysitting. Not only did Colby receive the degree promptly, but he was also offered a master’s for an additional $100. Colby was a good student: his course transcript lists an average grade point average of 3.5 – roughly equivalent to a UK 2:1. Following the successful sting, Pennsylvania’s attorney general filed a lawsuit against Trinity Southern. The university’s owners, brothers Craig and Alton Poe, were ordered to pay penalties of over $100,000 for offering deceptive degree programmes and sending out email spam to sell those degrees.

More recently, Australian health policy professor Mike Daube devised a canine sting to expose predatory open access journals. While the rise of free-to-access journals has been a boon for the scientists, the accompanying increase in the number of exploitative publishers has dogged science. While both legitimate open access journals and the shadier kind charge authors to publish their research, the latter lack any editorial rigour and have no proper (if any) peer review process: they would literally publish anything for money.

After Daube received another spell of spam emails from dubious publishers, he decided to find out what it would take to get a spot on their editorial boards. Although she doesn’t do anything to contribute to Daube’s research, his dog Ollie likes to watch while he is writing. Good enough, thought Daube, and wrote Ollie – aka Dr Olivia Doll – a CV, inventing credentials and including such delightful research interests as ‘the benefits of abdominal massage for medium-sized canines’. Sure enough, Ollie was accepted as editorial reviewer on the boards of seven medical journals. One even asked Ollie to review a submitted paper.

Daube hopes that the exposé helps draw attention to the problem. For experienced scientists, shady journals might be easy to spot, but right now pressure to publish is leading others – particularly young academics and those from developing countries – to pay exorbitant fees just to let a dog review their research. You could say the world of dodgy accreditation is barking mad…

Author’s note: At the time of publication, Ollie still sits happily on the editorial boards of Global Journal of Addiction & Rehabilitation Medicine and Psychiatry and Mental Disorders – where a picture of singer Kylie Minogue adorns her listing.