Be honest: the moment you heard there was a game about the pharmaceutical industry, you wanted to be able to pull out all the dirty tricks possible, didn’t you? It’s okay, you’re with friends. Sadly, the original version of Big pharma, the management game about peddling pills through a twisting maze of conveyor belts, didn’t have any of that. If you wanted to stiff the competition you could slap a patent on your product, but that was about it. 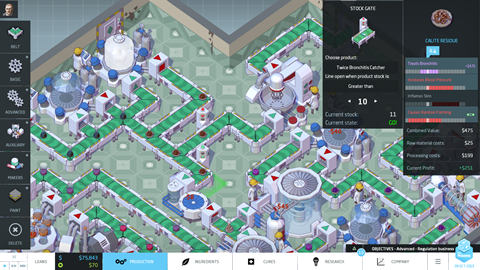 Thankfully, the game’s new Marketing and malpractice expansion changes tack, allowing you to be as horrendously corrupt as you desire. New minions – executives – are available, forming a sales force to wow medics and drum up customers with consumer advertising. Additional research options are also present, which allow you to smooth over regulators, cover up clinical trials or suppress the press. All of these mechanics have their own risks, and can have a negative impact on profits if the public finds out what you’re doing.

In addition to this potent post-launch sales pack, the expansion tweaks the base game, too. It’s finally possible to squeeze your margins by stop-starting your conveyor belts or adjusting sales prices manually. You can also pick up perks to aid your emergence in to the world of drug discovery, such as the ability to sell your unwanted machines without penalties.

The only problem is that to get all of the expansion’s nefarious bells and whistles you have to be playing at an advanced level. The beginner settings don’t allow you to research the juicy parts of the game’s technology tree, while those playing at higher difficulties will only find the really fun toys after developing the machines in the original game. This means that casual players aren’t likely to ever see what the expansion pack holds, and old hands will have to play the game for a few hours before they get to the new content.

Marketing and malpractice is the most complete version of Big pharma, and is packed with features absent from the original. Just don’t expect its best bits to be instantly available the second you fire up the production line.