The challenge of getting science into video games 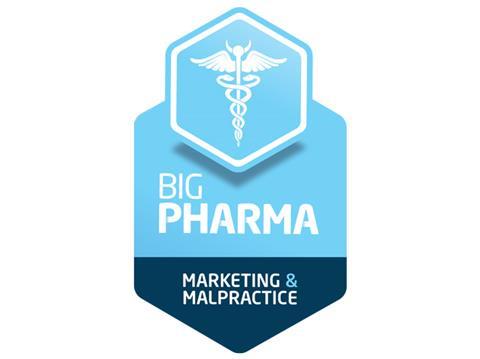 Science can be a great source of inspiration for creating games. It stands to reason: at its heart, a scientific problem is simply a puzzle that needs solving. The same can be said of games. Of course, the difficulty comes from trying to translate that scientific puzzle into an intuitive computer game that doesn’t require a PhD in chemistry to play.

When I created Big pharma, that was the task I faced: taking the challenges of running a pharmaceutical company – both ethical and technical – and distilling them down into a form that someone with no scientific or business background could understand and enjoy.

Instead of trying to emulate the real life pharmaceutical industry with complete accuracy, I tried to identify its key concepts and then build systems in the game that conveyed the essence of those themes – even if it meant things weren’t strictly accurate. A large part of the challenge was trying to align the competing gameplay and thematic requirements via a single unified system.

For example, early on in development I realised that for the puzzle elements of the gameplay to work, I needed to design a manufacturing system which would require the player to build a series of machines connected by conveyor belts. Thematically, I liked the idea that over the course of the game the player would discover new ingredients, which would appear with a set of randomised properties consisting of both desirable cures and negative side effects.

The real difficulty came in aligning these two requirements. I needed a system of interaction between the machines and the ingredients so that, if the player designed the production line correctly, they ended up with a finished product they could sell. I also wanted it to be possible to have cures of varying efficacy, and for it to be more difficult and expensive to create the more effective cures. Similarly, I wanted to offer the player the choice of whether to include side effects, again with the side-effect free version (virtually impossible in real life) being more expensive to produce.

After many months and many iterations, I finally came upon a system which worked and seemed to tick all the right thematic boxes. In the simplest terms, it involves running the ingredients through machines in an attempt to activate and improve the curative properties of the drug, while simultaneously trying to deactivate or remove the side effects.

In some areas, however, I was unable to align the gameplay and thematic requirements satisfactorily. One such area was the drug approval process. 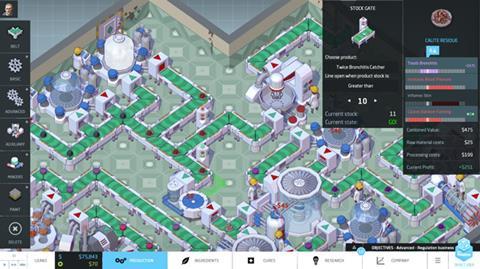 One of the things that makes the creation of new drugs so risky – and therefore so expensive – is regulatory approval. There are many stages, each with its own set of trials that need to be performed, and passing through an earlier stage is no guarantee of passing through a later one.

This makes it a really interesting area to look at from a game perspective, because it would increase the pressure on the player to favour low risk, highly profitable consumer drugs over the risky but potentially life-saving new wonder cures.

Unfortunately, the very nature of this system puts it at odds with some gameplay considerations. To get players interested early, I wanted it to be possible to create and sell their first drug within a few minutes of starting play; an approval system which delayed the release of a product by many in-game months or years would have severely dented a player’s sense of accomplishment at completing their first line.

This left me with a problem: how would I punish players for creating bad drugs without an approval system?

In the end, I settled on something resembling a delayed approval system. As a product sells, it accumulates a ‘cure rating’ which summarises its effectiveness and propensity to cause side effects. A highly effective cure with no side effects would get a high rating, while a poor cure with many side effects will get a low one. In turn, this rating affects the marketability of the product. This means that while it’s possible to sell a bad product for a short period, eventually its bad prospects will catch up with it.

I’m yet to receive any damming criticism of Big pharma from industry professionals – at least not to my face. However, one chemist got in contact tell me that the idea of trying to maximise the positive properties of a particular active ingredient while minimising the side effects was surprising close to the real pharmaceutical industry and that, while it was clearly not an entirely accurate simulation, the overall concept was good.

Real life is full of challenges, which makes it a great source of ideas for creating video games. Of course, once you decide to base a video game in the real world, you’re signing yourself up to at least attempting to resemble it on some level. The key to my approach is abandoning any attempt to portray things 100% accurately, but rather concentrate on portraying the key concepts and themes that you wish to capture in a way that is entertaining and informative.

Tim Wicksteed is the creator of Big pharma, a video game that puts the player at the head of their own pharmaceutical company. You can read our review of its Marketing and malpracticeexpansion pack here