Bring back the king: the new science of de-extinction 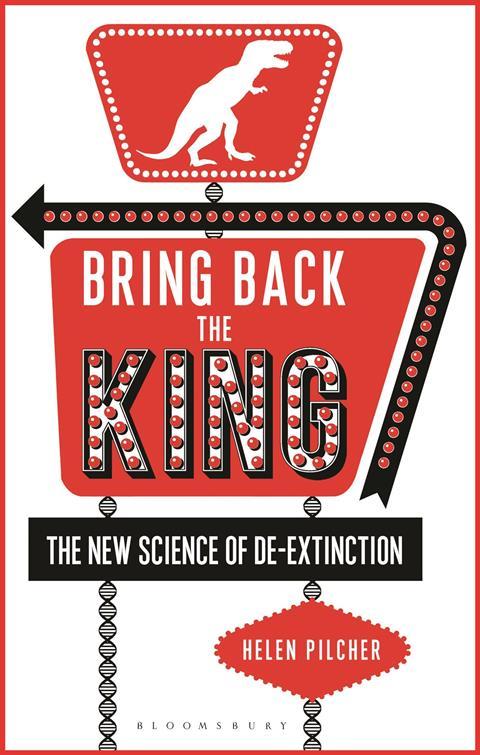 If you could bring back any animal from extinction, what would it be? Perhaps you would like to go for a beer with a Neanderthal, see dodo on the menu at a local restaurant or watch herds of woolly mammoth roaming in Siberia. Or have you not seen Jurassic Park and so still think it would be a great idea to bring back the Tyrannosaurus rex?

In Bring back the king: the new science of de-extinction, Helen Pilcher takes you on a journey through history, stopping along the way to scrutinise potential candidates for de-extinction. The book considers the T. rex, the woolly mammoth, the dodo, the gastric-brooding frog (which swallowed eggs then burped up fully formed frogs!) and even Elvis Presley, and explains the science that could bring them back to life.

The field of de-extinction covers a surprisingly vast and varied amount of research. Genetics, epigenetics, cloning, reproduction and ancient anthropology are just a few of the areas explored in this book. While these are all complex topics, here they are expertly explained, with enough information for you to understand the concept but not so much that you are left confused. This book is full of fascinating ‘did you know?’ facts for the pub. I’ll share one with you here. Did you know that it’s currently impossible to clone a bird? By the time their eggs are laid they’re too developed for the genetic material to be removed. This makes the task of bringing back extinct birds particularly challenging.

The science is interjected with anecdotes about the scientists who do this work and delightfully witty opinions from the author herself. I surprised myself more than once by laughing out loud at a science book.

Pilcher not only asks ‘could we de-extinct an animal?’ but also ‘should we de-extinct an animal?’ Cloning a woolly mammoth, for example, would involve carrying out risky and invasive procedures on Asian elephants, a species that is at risk of extinction itself. Even more troubling than this, cloning a Neanderthal would require a human to give birth to it as part of a risky experiment that couldn’t be guaranteed to succeed. Could we or should we even consider doing this? Pilcher’s personality shines through when dealing with these tough ethical dilemmas as she confidently shares her own insights and opinions. This book made me think a lot about my own feelings towards extinction and conservation, and I found myself reflecting long after I had finished reading it.

I would recommend Bring back the king to anyone who enjoys learning about science. It’s interesting, light and funny enough to be read for enjoyment, yet thought-provoking and detailed enough to appeal to scientists and non-scientists alike.

Bring back the king features in this month’s book club podcast. Hear an interview with Helen Pilcher, a reading from the book, and the thoughts of the Chemistry World team.