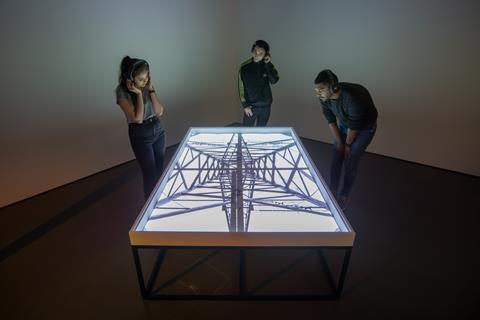 Science Gallery London is part of a network of centres that aim to bring science and art together. Its second exhibition since it opened its space on the Kings College London (KCL) campus last year is on the theme of dark matter, something that is definitely way beyond my comfort zone of biology-slash-chemistry. The installations are produced by 13 contemporary artists, in many cases working in collaboration with physicists at KCL and elsewhere.

I’m told upon entering that ‘95% of the universe is missing’. Normal matter that we can see makes up just 5% of the universe, while 25% is dark matter – something invisible and unobservable, that is nevertheless everywhere, passing through everything. The rest is made up of the even more mysterious dark energy.

It’s perhaps a tall order to create art when the subject is something that can’t be seen, heard or touched. But strolling through the exhibition, I’m impressed by the variety of media to explore – there are some more traditional, sculptural pieces but plenty you can listen to and watch. I walk through a dark room filled with loudspeakers in Tuning Interference: Dark Matter Radio by artist Aura Satz. The frequencies played by each speaker are based on a model of dark matter vibration developed by physicists at KCL. I’m temporarily mesmerised by Through the AEgIS, an animation made by a group of artists called Semiconductor during their CERN residency that shows the tracks created by particles made by collisions between matter and antimatter.

Other parts of the collection are less impressive. Missing Mass is an ‘empty’ Perspex box that apparently contains 5,461 dark matter particles. Hmmm. I know I’m meant to ponder the nature of invisible matter, to imagine the box’s unseen contents swirling around, constantly moving and ever-present in our world. But the cynic in me can’t help being slightly annoyed this passes for art.

A real highlight for me was the hugely entertaining short film Laws of Motion in a Cartoon Landscape by Andy Holden, which contemplates some of the laws of physics in the universes of Bugs Bunny, Betty Boop and Wile E Coyote, among others. ‘Golden era’ cartoons (from the mid-1920s to the early 1960s), Holden explains, lived in worlds bound by rules such as ‘any body passing through solid matter will leave a perforation conforming to its perimeter’, ‘all principles of gravity are negated by fear’ and ‘for each vengeance there is an equal and opposite revengeance’. The film was a pleasure to watch – so much so, I stayed to watch it loop round again, then went home and spent an enjoyable evening looking up old cartoon videos online.

For such an ambitious undertaking, Dark Matter manages to walk the line between physics and art remarkably well and certainly got me thinking. The exhibition is free, and a two-minute walk from London Bridge station. Definitely worth catching while it’s still on.