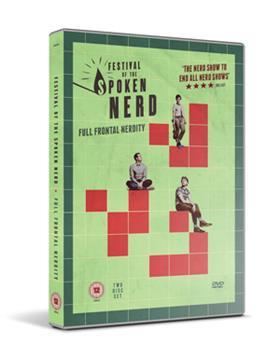 There are many examples of people conducting science on stage while also trying to be funny – or the other way around. However, many are too serious about their research, while others try too desperately to get laughs from their audience, leaving the science behind in the process.

Scientists turned comedians Matt Parker, Helen Arney and Steve Mould bring hilarity to the stage while casually showing off some interesting and often complex science. Festival of the spoken nerd is a recording of the trio’s first live tour, Full frontal nerdity. Though more on the comedic side, and certainly not a science outreach event, the show’s wild mixture of stand-up comedy, songs and science demonstrations makes for perfect evening entertainment. Each of the three presenters has their own very unique routine, which is why each gets mostly individual stage time. However, a good amount of banter between them and some group performances make the show flow smoothly.

Though some of the experiments might look familiar, I think the trio does an excellent job of giving known facts and figures a new twist. Some pieces of research might be less familiar – had it not been for the show, I might never have come across mathematician John Conway’s fascinating game of life, which has nothing to do with Milton Bradley’s board game of the same name.

The trio’s excitement about their science is highly contagious. Mould’s chain fountain, a physics phenomenon he had first come across a few years ago, even sparked some genuine scientific enquiry by two University of Cambridge physicists, who published a paper on the effect’s origin in early 2014.

Although I had been to the live show, I enjoyed the recording, which is, while not being a glitzy Hollywood production, still an immersive experience. A second disc features hilarious behind the scenes commentary as well as the trio presenting some DIY science, such as how to build your own miniature toroidal vortex cannon. Make sure you don’t miss out on Mould doing a variation of the flame test, as he tries to find out what salt he had soaked his age-old gherkins in by electrocuting them.

Overall, I think this DVD would make a perfect stocking filler for any nerd, geek (the DVD even includes subtitles in Klingon) or nerd-curious individuals. After the success of their initial tour, the nerd trio can also be seen live on stage till the end of February 2016.

Buy this DVD from Amazon.co.uk