Directed by Marjane Satrapi
2020| 110 minutes
www.radioactivefilm.co.uk
In UK cinemas | In US cinemas from 24 April 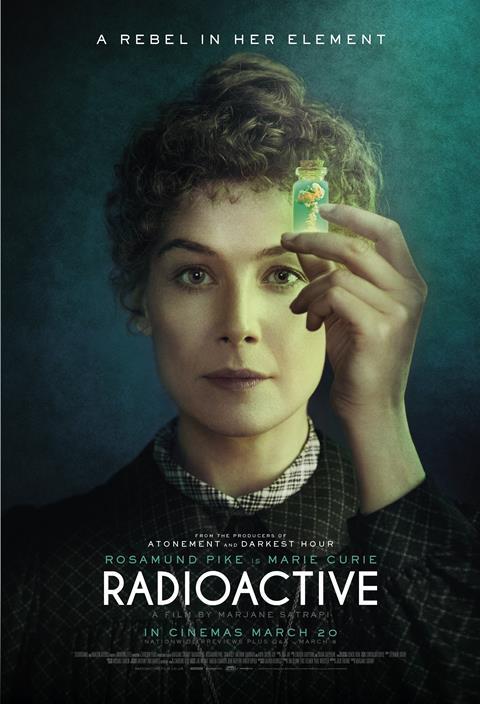 The movie Radioactive is an interesting one, attempting to profile both Marie Curie and her discovery itself, the phenomenon of radioactivity. It begins as Curie moves to Paris and fights to secure funding, a laboratory space and respect.

‘She was brilliant and unapologetic and fierce,’ states Rosamund Pike, the actor playing Curie, in a post-screening interview. Pike’s Curie is a pleasure to watch. She is direct, forcefully independent and never asking for equality but demanding it as a right.

I was pleased at the authenticity of the characters and the way science explanations were handled. All too often scientists are portrayed as nerdy, which feels gimmicky. Or, perhaps even worse, scientists have conversations at an artificially basic level in an attempt to explain scientific concepts to the audience – which completely shatters the illusion of realism. Here, Marie and Pierre flirt by complimenting each other on publications. They come across as legitimate, intelligent characters with passion for their subject. The laboratory conversations are kept vague but accessible, for example: ‘The numbers I’m measuring don’t make sense. I think there is something else, perhaps another element in here that is skewing my results!’ Additionally, Curie explains her concepts to a non-scientist over dinner.

Throughout the film, flashforwards highlight events to come as a result of Curie’s discoveries: the craze around radioactive branded products, radiotherapy treatment and nuclear weapons. These snapshots were inserted whenever there was a possible link or allusion to the concepts within Curie’s narrative. For example, when Pierre cautions in his Nobel prize speech that ‘radium could become very dangerous in criminal hands’, the director takes the opportunity to cut to a scene of Hiroshima just as the atomic bomb strikes. While I felt this was a great idea to add depth and meaning to the film overall, I wonder if these inserts could have been placed differently to eliminate confusion – or at least commented on more clearly.

Cinematically, the film was modern, engaging and enjoyable. However, I felt certain aspects of Marie’s life were given too much screen time: her fear of hospitals – which might be a strange dramatisation rather than based on truth – her overwrought grief following Pierre’s death and her affair with Paul Langevin. I also disliked a psychedelic transition scene showing Curie in bed appearing to have a nightmare – imagery that was perhaps to symbolise atomic structure and fertilisation, and likely a leftover from the graphic novel the film is based on.

On the other hand, I loved the way lighting and contrast were used to give everything an extra glow. Moreover, the score, performed by Kraftwerk, was impeccable.

While I’m not calling my friends and insisting they need to visit the cinema for this, I would certainly recommend watching on it once it becomes available for streaming or on DVD.