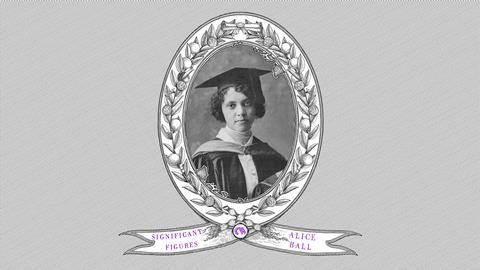 Twenty years ago, an unexpected query sent Paul Wermager, then librarian at the University of Hawaii in the US, down a rabbit hole from which he is yet to emerge. ‘A professor came in and asked whether I knew if there was a chaulmoogra tree on campus,’ he explains.

A call to the botany department revealed that there was – and it had an intriguing back story. ‘It had been donated by the King of Siam, now Thailand, in the 1930s to thank Hawaii for the help it had received for their leprosy patients,’ Wermager says.

The donation acknowledged the university’s role in developing the first mainstream treatment for leprosy. This research was conducted in the mid-1910s by the young black chemist Alice Ball. The king probably hadn’t heard her name, however. Ball died shortly after her breakthrough and her master’s degree advisor – and president of the College of Hawaii (now the University of Hawaii) – Arthur Dean omitted to mention her in the subsequent journal publications. Consequently, Ball largely faded into obscurity after her death.

Ball was born into a middle-class African-American family on 24 July 1892 in Seattle, Washington. Her family were prominent members of the community. Her grandfather – James Presley Ball Senior – was a famous daguerreotype photographer who opened galleries across the US. ‘He went to London in the 1870s, and apparently took a picture of Queen Victoria,’ Wermager says. Ball’s interest in chemistry is believed to have begun while watching her grandfather develop images as a child.

In the early 1900s, the family moved to Hawaii for a few years, returning to Seattle shortly after her grandfather’s death in 1904. Ball went on to earn two degrees from the University of Washington: pharmaceutical chemistry in 1912 and pharmacy in 1914. Her research there resulted in two papers published by the Journal of the American Chemical Society, one in 1914 and a second in 1917. At this time it was highly unusual for African-Americans or women, let alone African-American women, to publish in the scientific literature.

Next, Ball returned to Hawaii to study for a master’s in chemistry at the College of Hawaii. In 1915, she became the first African-American to graduate from the college and the first woman to earn a chemistry master’s there. Her research was on extracting the active ingredients from the kava (or awa) root, a popular narcotic traditionally used for ceremonies and spiritual practices.

‘After she graduated, they hired her as an instructor in chemistry,’ explains Wermager. Ball became the first African-American female instructor in the college’s chemistry department. In addition, ‘Alice was made head of the chemistry department in fall of 1915 – quite an advancement for a black woman at that time,’ Wermager adds. Ball also continued research, switching to look at chaulmoogra seed oil at the request of Harry Hollmann, an assistant surgeon at a leprosarium in Honolulu.

In the early 1900s, leprosy was rife on the Hawaiian Islands. Hollmann’s hospital treated milder cases, while more advanced cases were quarantined in Kalaupapa, a remote part of the island Molokai. It is estimated that around 8000 people were sent to this settlement before its closure in 1969. Today, it is a US National Historical Park, and is still home to some former patients who chose to remain here because of fears of social discrimination due to disfigurements or amputations.

An early leprosy remedy was to inject patients with the oil from the seeds of the chaulmoogra tree (Hydnocarpus wightianus). ‘Injecting somebody with a thick oil was very painful and caused abscesses,’ explains Wermager. Wanting to improve the delivery method, Hollmann contacted Dean who in turn recommended Ball. ‘After a great amount of experimental work, Miss Ball solved the problem for me by making the ethyl esters of the fatty acids found in chaulmoogra oil,’ wrote Hollmann in an Archives of Dermatology and Syphilology article in 1922.

Saponification of the oil to make the potassium salts of the fatty acids was the first step in Ball’s method. Acidification and purification by successive re-crystallisations followed. Finally, the acids were converted to ethyl esters, forming a more easily injectable liquid. ‘Since the establishment of the treatment of leprosy by the ethyl esters of chaulmoogra oil by me at the leprosy hospital […] 84 patients […] have become bacteriologically negative and free from all lesions of the disease and have been discharged from segregation,’ explained Hollmann in his 1922 article. Ethyl esters of chaulmoogra oil rapidly became the standard treatment for leprosy and remained so for two decades.

Alice was not, as a woman and especially as a black woman, deemed the esteem and status of that of a man

But Ball didn’t live to see any of this. She died in Seattle on 31 December 1916, aged just 24. The cause of her death is unknown. In her absence, Dean continued her research, eventually going on to mass produce the ethyl esters for use in leprosy treatment in Hawaii and beyond. He published his preparation method – a minor tweak on Ball’s unpublished work – in the Journal of the American Chemical Society in 1920 and the Journal of the American Medical Association in 1921. Neither article mentioned her name.

At that time, ‘it was not uncommon for professors to have outstanding students do research for them, and whatever discovery they might make, for the professor to then put it under their own name’, explains Kathryn Waddell Takara, a retired professor of ethnic, African-American and African studies at the University of Hawaii. ‘Alice was not, as a woman and especially as a black woman, deemed the esteem and status of that of a man, particularly a white man, or even a white woman.’

Hollmann, however, took objection to Dean’s omissions. In his 1922 article he referred to Dean’s tweak on Ball’s method: ‘I cannot see that there is any improvement whatsoever over the original [method] as worked out by Miss Ball.’ ‘It’s like he was trying to set the record straight,’ Wermager explains. Hollmann’s article had minimal effect, however, and today Ball largely remains missing from the leprosy history books.

‘Leprosy is a bacterial disease caused by Mycobacterium leprae,’ explains Steve Walker, consultant dermatologist and research professor at the London School of Hygiene & Tropical Medicine (LSHTM) in the UK. ‘Leprosy causes skin lesions and nerve damage, and it’s the nerve damage that leads to the disability that most people associate with leprosy.’

In the mid-1940s, chaulmoogra oil esters were replaced by the antibiotic dapsone for treating leprosy. Then, in the 1960s, the three-drug treatment regime that we use today was introduced. ‘The World Health Organization [WHO] recommends that people are treated with three antimicrobial drugs. One, rifampicin, is given on a monthly basis and the others, dapsone and clofazimine, are given daily,’ Walker says.

In September 2019, the LSHTM announced it is to carve the names of Ball, Marie Skłodowska-Curie and Florence Nightingale onto the front of its main building. These women will join the 23 men whose names have been there for 90 years. ‘Our frieze will now better reflect the talented and diverse people who work […] in global health around the world,’ LSHTM director Peter Piot told Chemistry World. ‘I’m particularly pleased we are recognising Alice Ball, honouring her work and helping to make her rather hidden story more visible.’

This is one of a number of efforts in recent decades to increase awareness of Ball and her life-saving research. In 2000, for example, Wermager arranged for a plaque to be placed at the base of the chaulmoogra tree given by the King of Thailand. The plaque cites Alice’s contribution to the treatment of leprosy. Several people who had lived on Molokai attended the dedication ceremony, explains Takara. ‘That was quite wonderful.’

Three years ago, Wermager also established an endowed scholarship at University of Hawaii in Ball’s name. Now, he is working on her biography and is currently looking for details of what Ball was like as a person for inclusion. Searching old newspaper articles has revealed that she offered free compositional English lessons to young women in her evenings. ‘I think this says a lot about her as a person,’ says Wermager.

Ball’s chemistry know-how led to the first mainstream treatment for leprosy, a disease that at the time was condemning thousands of people worldwide to a lifetime shunned from society. However, her early death and ‘lower status’ as an African-American woman meant Ball’s contribution never saw the recognition it deserved at the time. It is, therefore, heartening to see a growing number of efforts to write Ball back into the leprosy history books.

Read our review of the upcoming short film The Ball Method, based on her life