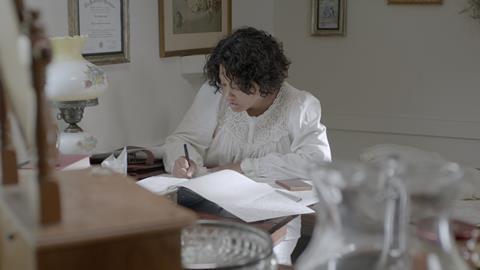 If you have never heard of Alice Ball before, that’s okay. By the end of The Ball Method’s 19 minutes, she’ll be someone that you won’t forget.

The film depicts the life of Ball (played by Kiersey Clemons) as she makes a breakthrough discovery for the treatment of leprosy in 1915. At 23 years old, she traveled to the Kalihi Hospital in Hawaii to aid assistant surgeon Harry Hollmann (played by Kyle Secor) in developing treatments for leprosy. The oil from the seeds of the chaulmoogra plant had been identified as a therapeutic option but a good technique for administration couldn’t be found. Enter Ball.

The film opens with an impressive amount of archive footage, setting the scene for the early 20th century. Those involved in set design and costume have done an impressive job as even the scientific equipment looks accurate for the time. Director Dagmawi Abebe, alongside development support from the Alfred P Sloan Foundation, has clearly applied a great deal of effort to ensuring the scientific and historic principles of the film are properly portrayed. Being drawn into the short film is easy as irritating inaccuracies are hard to find.

This film is not only interesting from a scientific perspective. Ball’s life was difficult. She was a young African American woman in 1915 who was trying to pursue a career in academia. Through Abebe’s lens, the viewer bears witness to the racism that Ball is subjected to, both from her superiors and her students. These subversive acts of racism and sexism, which still are much too common today, can make for difficult viewing, especially for those who are aware of how her story ends. Clemons plays Alice well, quietly showing a wealth of inner strength in opposition to these challenges.

Ball’s work wasn’t properly recognised until 2000, over 80 years after her vital contributions. She was clearly an incredible scientist ­and this film helps a general audience appreciate that.

The Ball Method is an interesting and entertaining short film. I really enjoyed watching it and would highly recommend it, both to scientists and non-scientists.