Atoms in chemistry: from Dalton's predecessors to complex atoms and beyond

Atoms in chemistry: from Dalton’s predecessors to complex atoms and beyond 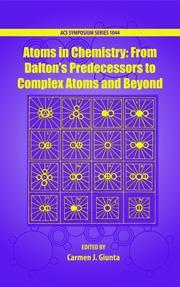 This slim volume arose from an American Chemical Society meeting held in 2008 to celebrate the 200th anniversary of John Dalton’s epoch-making book A new system of chemical philosophy  .

Atoms in chemistry  has seven chapters, written by distinguished historians of chemistry. Some chapters set the scene by dealing with ’pre-Daltonian’ atoms, starting with ancient Greek ideas and moving on to the state of play immediately before Dalton’s input.

And what of Dalton’s contribution? Without it we would not have had molecular formulae, chemical bonds and structural formulae, despite his supposition that water was HO rather than H2O - an assertion that gave rise to half a century of confusion.

There were a handful of post-Dalton chemists who were reluctant to accept his theory and developed alternatives based on complicated mathematics or chemical energetics. The physical chemist Wilhelm Ostwald persisted in denying the physical existence of atoms even into the early 1900s. However, the accumulating evidence, outlined here, all fitted in with the notion of discrete atoms, and Ostwald finally capitulated in 1909.

This is an important book and should be read by all historians of chemistry who have an interest in this period. Furthermore, it will appeal to the non-specialist who enjoys reading about the history of our subject. However, the price is of some concern: at ?95 for just 116 pages, it must have established some sort of record.