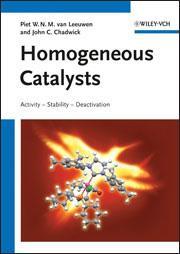 The authors of this book have a wealth of experience of homogeneous catalysis from both industrial and academic perspectives, and are able to provide many illuminating insights concerning the factors that affect catalyst activity and stability. The particular focus of this book is to identify the mechanisms by which homogeneous catalysts can become deactivated and the ways in which these pathways can be avoided.

The book begins with a chapter that deals with the elementary steps involved in catalyst deactivation and inhibition (eg ligand degradation, catalyst precipitation and formation of inactive metal complexes). The next five chapters focus on specific aspects of catalytic olefin polymerisation and oligomerisation. Early transition metal catalysts (eg Ziegler-Natta systems and metallocenes) are dealt with separately from those based on late transition metals that have been developed in recent years.

Heterogenised polymerisation catalysts are then considered, followed by a chapter on the dynamic equilibria that exist between active and dormant catalyst species. The range of catalysts effective for oligomerisation of ethene to 1-alkenes is then reviewed. The remaining four chapters look in turn at asymmetric hydrogenation, carbonylation reactions (including hydroformylation, methanol carbonylation and CO-alkene co-polymerisation), cross-coupling reactions and alkene metathesis. Throughout, the book is well illustrated by examples from the literature, including many recent references.

This volume provides an up to date, well-informed appraisal of issues concerning activity and stability of homogeneous transition metal catalysts.   It will prove to be a valuable source of information for researchers working in this field, from graduate students and academics to process chemists in industry.