One Hundred Patents That Shaped the Modern World 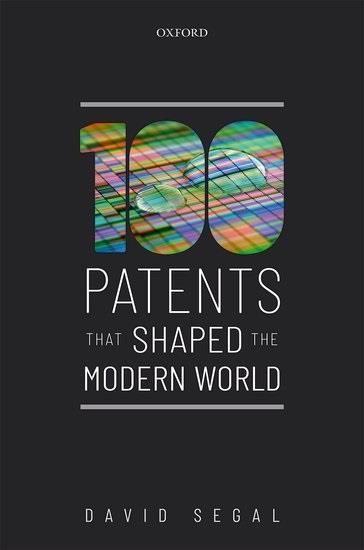 I suspect the inspiration for this book was Neil MacGregor’s acclaimed radio series A History of the World in 100 Objects and the follow-up book of over 600 pages with the same title. In this book, however, the 100 patents are dealt with in about 200 pages, the author David Segal having set himself the daunting task of summarising and contextualising each patent in just one or two pages of print.

Some 40 of these patents can be described as chemical, using the word broadly. Segal assumes a reasonable background knowledge from his reader and thus he’s not afraid to include equations and structural formulae where they add clarity. His approach is strictly chronological, thus we have the board game Monopoly (1935) and the photocopying method of xerography (1940) sandwiching polythene (1937) and nylon (1938), and later, the polyamide Kevlar (1972) between the computer mouse (1970) and Post-it notes (1972).

Each entry is provided with a few suggestions for further reading. They refer, mainly, to books and journals – ideal if you have readership entry to the British Library or an academic institution, but follow-up will be expensive if you don’t. The author has eschewed mention of the internet, though if you search you can find the patents themselves. Perhaps, unlike me, he has no faith in Wikipedia and similar sources.

Readers not willing to invest in this admittedly well-produced book can easily find lists of 100 world-changing inventions online, dip in according to interests, and then follow them up with the aid of Dr Google. Twenty years ago, when most computers were of the desktop variety, this book would have had the advantage of portability. When laptops came along, it might have just about retained this advantage. But now that everyone is wedded to their smart phones and tablets, I wonder what the future might hold for books of this type.