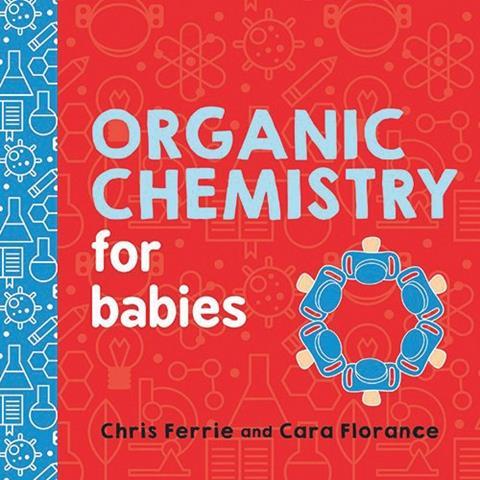 Organic Chemistry for Babies is a light-hearted introduction to some concepts of organic chemistry, aimed at toddlers (and their parents). It’s part of a series that features topics ranging from quantum physics and general relativity to evolution and neural networks. The book starts out with a very simple analogy of atom connectivity and valence using different coloured balls – each type of ball can stick to a different number of other balls. While this is very clear and well explained, I found it mildly irritating that the colours used ignore the established conventions – using red for carbon, yellow for nitrogen, green for oxygen and blue for hydrogen. I can see that using bright colours will be attractive to young children, but it erects barriers to linking the book with the next steps in learning about chemistry, such as molecular model-building toys.

The book makes the link between the initial ‘balls’ model and atoms quite well, but then jumps directly to using skeletal structures of some quite complex molecules. Admittedly, those molecules are related to their everyday applications – for example aspirin as a medicine and vanillin for its scent – but it still feels like quite a big jump to expect a toddler to follow from the relatively simple idea of connecting different coloured balls to interpreting complex structures. I was also slightly disappointed that the ingenious cover graphic – using dummies arranged in the shape of a benzene molecule, was not reflected anywhere within the book.

That said, the pictures are bright and engaging, and my 15-month old certainly enjoys turning the pages and looking at them. Overall, the book feels a little more like something that geeky parents (myself included) would get for their kids, mostly for their own entertainment rather than any real attempt to teach the child about chemistry. And there’s absolutely nothing wrong with that.