Radium and the secret of life 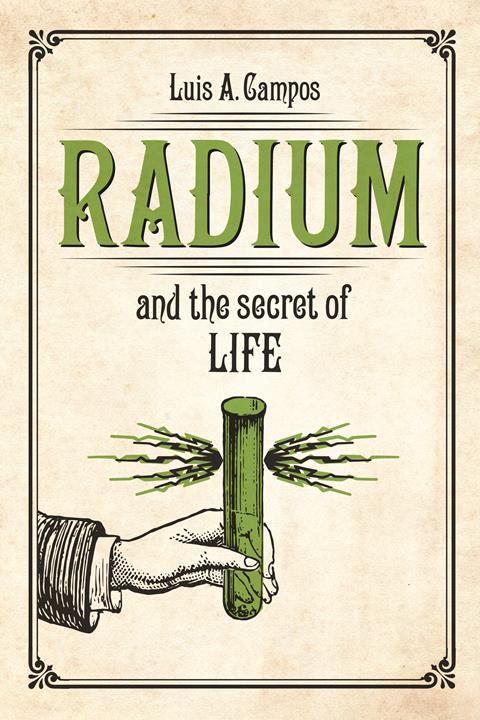 A mushroom cloud, a glowing green rod, that black and yellow trefoil hazard symbol, submarines and enormous cooling towers – not to mention a sizeable cast of superheroes. Radioactivity has a reputation built on iconic images, but these say little about our relationship with the seemingly miraculous radioisotopes when they were first discovered.

Knowledge of radium’s role as a stimulant and vitaliser, as well as in shrouding and unraveling the mysteries of life, is no longer widespread. Radium and the secret of life recounts a time in modern science when the powers of analogy and unshackled abstraction reigned supreme. At the turn of the 20th century, radioactivity seemed just as baffling as the mystery of life… Why shouldn’t one therefore perfectly explain the other?

Luis Campos dissects the chirping of pre-eminent scientists during their radium-fuelled flights of fancy. The fantastical speculation during the times of Ernest Rutherford, Hermann J Muller and Marie Curie surrounding the origins of life and these glorious new radioisotopes is presented without oversimplification or exaggeration. Nonetheless, it is worth noting that this book deals first and foremost in discursive analysis, and so leaves behind the stylistic boundaries that you would generally find in a popular science book. This makes for an interesting change of pace, and I imagine that many will revel in the vignettes from this unique chapter in modern science. However, others hoping for another source of conveniently condensed science trivia will almost certainly find themselves wearily entangled.

The coherent assembly of bygone views linking life and apparently living atoms is achieved only through Campos’ impeccably worded narration. He offers insights into not only the wishful and human sides of intellectual giants of the era, but also the force with which unbridled publicity and an unprepared scientific vocabulary would divide these researchers – marking them as pioneers or misguided enthusiasts. Without a decent grounding in the life sciences, however, readers will find their experience punctuated with excursions to learn their protoplasm from their chromosomes.

Our fling with radioactive elements has been lit by their seductive, empowering and murderous glow. We once speculated about their life-giving potential and plastered our faces with radium cosmetics, yet we now know to count millisieverts even more carefully than calories. There is definite nuance to this story; it is as much about evolving language and breaking down interdisciplinary boundaries as it is about nuclear explosions, and this is the book to revive these decaying themes.