The death of expertise: the campaign against established knowledge and why it matters 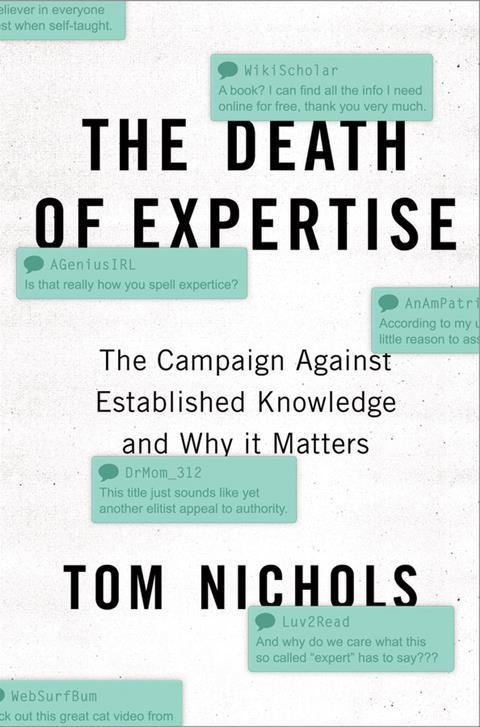 In 2016 Oxford Dictionaries declared ‘post-truth’ to be word of the year. In a year when the UK public voted to leave the EU, and the American people voted Donald Trump into the White House you may have found yourself asking ‘has the whole world gone mad?’ National security expert Tom Nichols argues that it isn’t madness, but extreme narcissism that has led us into these borderline-surreal scenarios.

The MP Michael Gove summed it up in the run-up to the Brexit referendum with his now-infamous assertion that ‘we’ve had enough of experts’. It seems we – we being Joe Public – couldn’t be less interested in facts, apart from the ‘alternative’ kind that suit our own views.

In The death of expertise Nichols aims to unpick the complex sociological reasons for this – a movement he calls the ‘campaign against established knowledge’.

The book could not be more topical, although some of the events we see now are the result of cultural shifts that began decades ago. Since the 1960s and 1970s, people have been gradually becoming less and less trusting of authority, be that political leaders or specialists in any field.

Nichols says the internet has a lot to answer for. You’d think having access to more information would make us smarter, more objective and rational. But instead, it convinces us we know it all and provides a platform to assert and publicise our own views, while social media echo chambers isolate us from alternative points of view.

Likewise, the media plays a part – telling readers what they want to hear, publicising problems such as misconduct or error and eroding our confidence in experts.

A professor of national security affairs and former aide to the US senate, Nichols himself gives very much an expert’s-eye-view of the situation. Because of this I was worried that the book would be an extended rant about generation Y and millennials. The jargon-packed blurb certainly doesn’t do it any favours. But it is surprisingly easy to read from the beginning.

I can see how The death of expertise will serve as a comfort to other experts, including scientists who have worked hard to build their knowledge base who will no doubt empathise with Nichols. I’m not so sure it will appeal to members of the anti-expertise camp who really need winning over.

On the whole the book paints a rather worrying picture – it is plain to see that recent world events are a direct result of some of the ideas Nichols discusses. And depressingly, I doubt whether his words have the power to change the situation for the better.

But I may be wrong. I’m no expert, after all.

This book features on this month’s book club podcast