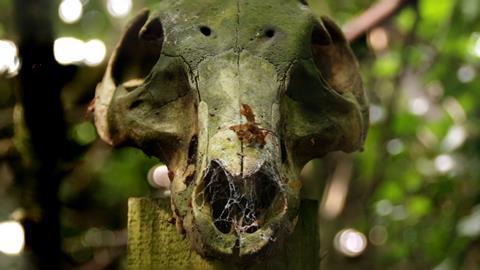 A day at the body farm

Behind the scenes at Wales’ only taphonomic research facility

The maggots are out in force. Set out on a tray at the entrance to the body farm are a row of pig’s trotters, each with a variety of knife blows and stab wounds. Out in all weather for several weeks, the flesh has sloughed and putrefied, which has brought the local scavengers. Typically, there’s a pecking order when it comes to corpses: first blue bottle flies; then specialist necrophages, like hide beetles, that only eat skin, fur and feathers; finally creatures that feed on the feasters themselves. Today, it’s the turn of fly larvae laid in the rot, like several hundred grains of rice, squirming over their first meal. It’s an unsettling sight, but one that’s necessary for the latest forensics research at Wales’ only body farm, at a secret location not far from Wrexham Glyndŵr University.

‘The first time I came … there was a tattooed pig’s head on the floor, some rat corpses,’ recalls Megan Owens, who has just graduated from the university’s forensic science course. ‘It was slightly gross, slightly disgusting, but really cool at the same time to see all this research coming together.’

The body farm is relatively compact, hidden in woodland and secured with chicken wire to prevent local foxes and birds from raiding surface-based research projects. ‘The farm has been running for four years to do taphonomic research,’ explains Amy Rattenbury, the programme leader in forensic science at Glyndŵr. ‘That’s the science of what happens to the body between the point of death and recovery, and how all those processes can affect the body.’ 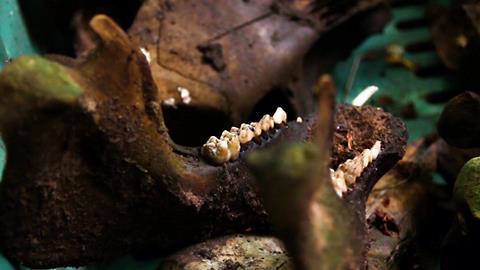 This is an essential tool for both training forensic scientists in decomposition, and in providing real-world data that can offer the police vital clues during their investigations – both in locating human remains and finding out how a person died. ‘[Taphonomy] is very under-researched, both in the UK and internationally,’ Rattenbury continues. ‘We’re so far behind the research that’s done internationally, and it just doesn’t apply here. We can’t take data from a body farm in Tennessee, Florida or Texas and apply it to a north Wales climate. Even the scavengers are different.’

The UK doesn’t have a human body farm at present (‘it’s a grey area,’ Rattenbury explains, ‘it’s not illegal but there’s no legislation to cover one’) so all research is conducted on animal carcasses. ‘We are governed by the Department for Environment, Food & Rural Affairs,’ Rattenbury says. ‘They look at the impact on the environment, how ethically we source our research, and that the research we are doing isn’t just for curiosity: that we have a real, justified approach on why this research is essential … It’s a difficult area because not everyone is OK with the idea behind it. We have to set up the facility and make sure people aren’t offended.’ 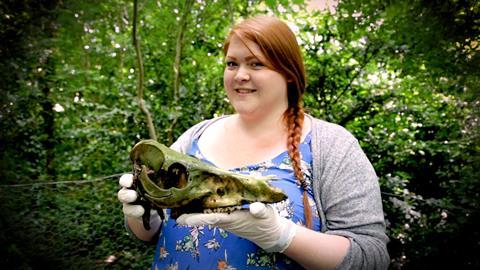 Amy Rattenbury specialises in the location of human remains

Sourcing the carcasses for experiments varies. All come from either food industry abattoirs or pet shops (frozen mice are used to feed snakes), ensuring no animal has been killed for the farm. ‘It’s the most ethical way to source things,’ Rattenbury continues. ‘We don’t like the idea of killing animals just for research.’ Typically, pigs are used to simulate limbs – it’s the animal most similar to humans in terms of tissue density, skin and hair – while smaller creatures are used when a whole body is needed. ‘The way a severed limb decomposes is different to the way a whole body decomposes,’ Rattenbury adds. ‘The mice and rats are euthanised through asphyxiation [before we buy them], which doesn’t have traumatic impact on the remains. And, as soon as you add trauma, it changes the decomposition.’

The Wrexham body farm has a wide range of experiments in its small footprint. The maggot-infested trotters each have been assaulted with a different knife as part of a project with Liverpool John Moores University to see the effect of blades on bone. A series of fleshy skulls have been left in different environments to assess decomposition; one wrapped in a bag has mummified (‘we’re hoping to do more research on why, as this is a common disposal method’). In a far corner, yet more trotters have been encased in concrete and cement; when the experiment was cracked open, some had mysteriously turned blue – the team is currently trying to understand the chemical processes that cause the effect. The smell across the site isn’t too bad until Owens opens up a sealed containers to show her own project, looking at how the tensile strength of skin on a corpse changes over time. Then everyone except Rattenbury is forced to turn away, gagging from the stench.

One of Rattenbury’s own interests is the location of human remains – one experiment has shown nettles have grown where remains have been buried but are absent from the controls. ‘The chemistry of decomposition affects the soil nitrogen levels,’ she explains. ‘Anything we can do to identify where a grave might be, how long a body has been there, and who it might be … the more we recognise those patterns and changes [the more crimes we can solve].’ 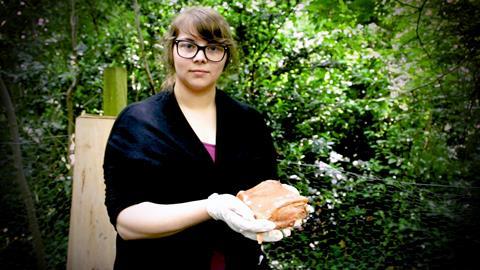 Rattenbury’s journey to the farm has taken in a variety of scientific interests. After studying forensic biology at Staffordshire University, she became interested in the module on human identification and moved to the University of Bradford, where she studied forensic archaeology and crime scene investigation. After a stint in a lab, she moved to teach in Essex. ‘A lot of students were interested in water-based decomposition as we were based in Southend. That sparked it for me.’ Since then, her research has branched out from the systematic investigation of mass fatalities to cold cases and even in assisting marine searches – something she continues even in landlocked Wrexham. ‘We’ve been doing quite a lot of work with the cadaver dog training team,’ she says. ‘We’ve got the licence so we can decompose samples to give dogs to train them for both land-based and water-based searches; there’s no point if we only ever train them with fresh meat, as they’d only find fresh corpses. It’s generally been accepted that dogs can’t find things in salt water. We’ve shown that they can – in fact, they’re better at it than in fresh water.’

Although Rattenbury leads the farm, maintenance is performed by second and third-year students at the university. Roughly half the experiments are conducted at the farm, while the rest are performed in the university’s chemistry labs – fully equipped with tools from scanning electron microscopes to IR spectroscopy. ‘For my project, It was half in the body farm, half at the lab,’ says Owens. ‘The samples were always here but some analysis was done in the lab. It’s a good mix – we do a big end of year clean-up, but you’re in charge of your own project.’

Owens, like most of her course, was inspired to pick forensics as a career thanks to programmes such as CSI: Crime Scene Investigation. ‘From a young age, I watched CSI, Criminal Minds, shows that portray [forensics] as this amazing thing… I got in thinking that it was going to be collecting evidence, and doing everything yourself. But it’s a more complicated process, and I prefer that.’ 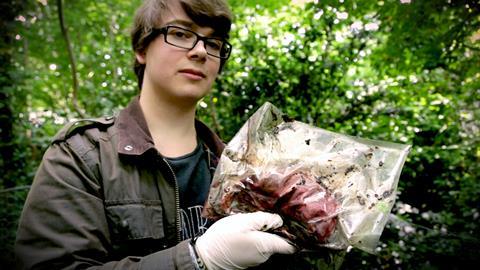 ‘It’s very different to what you expect,’ agrees fellow student Cameron Elms. ‘But that’s down to media coverage and Americanisation … for the first year, we focused on what forensics is, and a lot of basic chemistry and maths. That progressed, and the forensics aspect kicked in during the second year. That’s when we did CSI. Now I study decomposition, and how mass fatalities are worked on professionally and processed.’

Elms’ own experiment was, he says, an eye-opener. ‘I looked at the effects of sodium chloride on the decomposition of rats,’ he says. ‘For the first few weeks it was OK. After that they smelled so bad … I was almost sick every time. You don’t expect things to be that graphic.’

Despite the important research conducted at Glyndŵr, the future of forensics in general remains uncertain in the UK. ‘Forensics is privatised in the UK, so it’s hard to get into,’ says Elms. ‘Before 2011, it was government-controlled, but there’s very few forensics roles out there [at present].’ 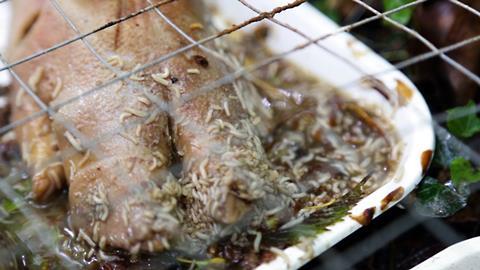 The lack of a human remains facility in the UK is also a big sticking point; while the five UK body farms provide vital clues, there is only so much that can be achieved. ‘There’s a big stigma about human body farms,’ Rattenbury admits. Currently there are campaigns for a shared human remains facility in the UK, while recent legislation in the Netherlands means a European body farm will soon be established in Amsterdam.

Yet while these are difficulties, the advent of more advanced technology means body farms could provide even more clues to help crack criminal investigations. During the body farm’s encasement project, the team noticed the concrete created a perfect cast of the trotters. ‘We could get a perfect cast of a face or fingerprints,’ Rattenbury suggests, highlighting how this could help identify remains. ‘And if I find a body but my expert is 300 miles away, you could 3D scan the remains and get it to them. I don’t know how close we are with that, but there’s a big push.’

For now, though, the Glyndŵr body farm is going to continue to do its best to provide real-world data on the strange chemistry of death. Not an easy job, but a vital one. ‘It’s not the type of thing you want to tell people about, as they don’t find it pleasant,’ sighs Rattenbury. ‘But if you are someone who can cope with it, you feel duty-bound to do the research.’